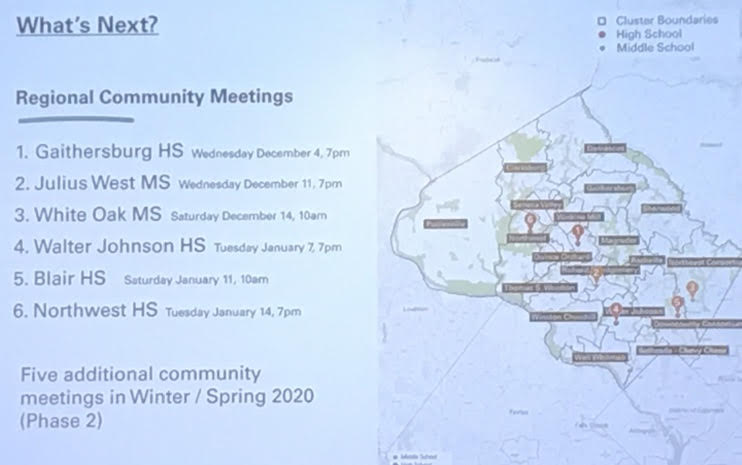 At the Nov. 18 public hearing at Calver Educational Services Center, the Board of Education gave a short presentation. This included a reminder of future regional community meetings that anyone is allowed to attend.

Members of Montgomery County are divided on the concept of redistricting, as the Board of Education pursues a comprehensive assessment of the county’s boundaries. The Board has been hosting Districtwide Boundary Analysis Public Meetings in Montgomery County, including a recent public hearing at the Carver Educational Services Center that took place on Nov. 18.

“MCPS has not had a complete boundary analysis in over 30 years,” chair of the Board’s Fiscal Management Committee and a member of the Strategic Planning Committee Jeanette Dixon said. “The purpose of the study is to do an analysis including looking at the efficient use of existing facilities not make recommendations on boundary changes.”

Overcrowding among MCPS schools is one key factor that has led the push for redistricting. Factors like facility utilization and capacity, student demographics, school assignment and travel patterns are being taken into consideration for the boundary analysis process. 41st Student Member of the Board, Ananya Tadikonda, introduced this study last year.

At the hearing in November, the main topic of disagreement was whether kids should be bussed to different schools. Some parents talked about how longer bus commutes will be inconvenient, while some students argued that this should not matter in a discussion about equal education.

Dixon said that the Board of Education has no intention of changing all boundaries in the county; however, they are not in favor of concentrating students who are impacted by poverty and tend to be African American or Latino all in one school. She said the Supreme Court has held that separate but equal schools are unconstitutional, comparing socio-economic segregation in MCPS schools to the racial segregation that existed in the late 19th to mid 20th centuries.

Dan Binstock, a parent in the WCHS school district, voiced his concerns.

“One concern raised at the recent hearing is that only two companies in the entire country submitted proposals to do the study,” Binstock said. “The company chosen has never performed an assessment on a county similar to Montgomery County.”

The consultants are a New York-based group called the WXY Architecture + urban design. According to their website, they specialize in “innovative solutions to complex urban design challenges.” They have experience with studies like the NYC District 15 Diversity Plan and the School District of Lancaster Boundary Plan.

Erika Schwartz, a parent of two current MCPS students, emphasized the importance of parent support. She and her husband are often involved with their children’s schools, but are only able to do this because of the proximity of their workplaces to these schools.

“A huge concern for me is the potential loss of this type of parent support if redistricting puts students far from their home community,” Schwartz said. “My husband and I are only two parents in a sea of countless others who would no longer contribute in this way if there were a distance created between our student’s homes and their schools.”

The consultants are not allowed to make recommendations on specific boundary revisions. Their job is to provide a synopsis of MCPS schools are being utilized now. In a manual provided at the community meeting on Dec. 4, it is stated that the purpose of the study is not to redraw school or cluster boundaries.

Seth King, a licensed psychologist, described other risks that come with redistricting. He said that students who have Individualized Educational Programs to address learning disabilities and emotional challenges might be negatively impacted.

“Such children have become accustomed to the structure offered through educational support services already established in their current schools,” King said. “Changing these environments brings significant risk of disrupting the academic progress of those students who are already struggling to overcome their educational challenges.”

Dr. Genevieve Siegel-Hawley, an Associate Professor in the Department of Educational Leadership at Virginia Commonwealth University, has published several books about creating intentionally diverse and equitable schools. She said that a plan for disabilities should be a part of the Board’s proposal. She also mentioned the new opportunities provided by redistricting.

“Rezoning offers an opportunity for communities to set goals around equity and diversity and draw on one crucial tool to achieve them,” Siegel-Hawley said. “It makes the invisible visible, at least temporarily, by calling attention to these politically drawn boundaries.”

She described how too often, communities with the most political power and economic advantage fight to preserve what they perceive as their right to a school because they bought a house they could afford. She emphasized that part of the effort has to be helping people in the broader Montgomery County community see all of the schools as their school.

Howard County Board of Education has already approved a socio-economic based redistricting plan which will be implemented starting the 2020-2021 school year. Around 5,320 elementary and secondary students in Howard County will be affected. This final decision made on Nov. 22 sparked tense debate. In opposition to this decision, several residents of Howard County are speaking out on social media platforms like Facebook and Twitter.

As for Montgomery County, no official decision about re-drawing current school boundaries has been made yet. The consultants’ interim report will be released on Feb. 15, 2020 and a final report will be given on June 1, 2020.