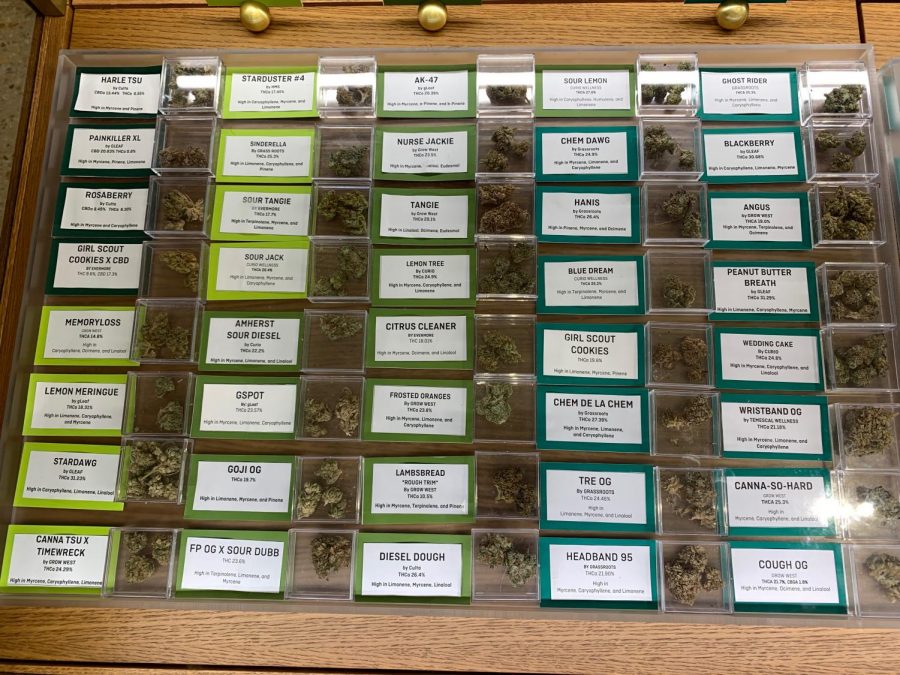 Liberty, a local medical cannabis dispensary in Rockville, displays samples of strains in their store. Each strain has a different purpose, whether medical or recreational.

Marijuana has historically been labeled as a “gateway drug” by health classes all over the world. Recently, about 33 states have legalized the use of marijuana for medicinal purposes and 10 of those states, including the District of Columbia, have adopted laws allowing recreational use.

Marijuana is slowly losing its stigma of being a life-threatening drug and is gaining the reputation of being a life-saving one. Hospitals all over the country are using this plant and its many properties to treat or ease symptoms for patients with cancer, epilepsy, neuropathic pain, multiple sclerosis and other diseases. It is also helpful for those coping with anxiety, depression and insomnia.

“In health class, we are taught that weed is a gateway drug and that it is just as dangerous as any other drug,” senior Kayla* said. “While I think that the drug is dangerous in some ways, it is very beneficial in other ways, too, for people who need it.”

Since medicinal weed is legal in the District of Columbia area, multiple dispensaries have set up shop locally, including Green Health Docs, Liberty and Harvest of MD. However, statistics show that legalization does not necessarily mean teens are rushing to the nearest store for a smoke.

According to a Sept. 2017 Washington Post article, although health experts believed the legalization of marijuana would increase teen use and “send the wrong message,” usage among adolescents has dropped to the lowest it has been “in two decades.”

“I think that as it has become legalized, it is less ‘cool’ to do, so people have moved away from it,” senior Alex* said. “Also, with new health initiatives sweeping the Western world, drugs do not have the same hype that they used to.”

Teens are not only smoking less; they are becoming more accustomed to weed in everyday life. Marijuana’s stigma of being a dangerous drug is slowly fading.

“I would prefer if people did not smoke around me unless I knew people would be smoking beforehand,” senior Alex said.* “If I knew it was happening, I would make sure to bring a change of clothes to make sure I would not smell.”

However, marijuana is still a drug, and every drug comes with the possibility of negative side effects.
According to the National Institute on Drug Abuse (NIDA), smoking marijuana can affect brain development as well as cause breathing problems, increased heart rate and intense nausea.

*name was changed for anonymity of the source