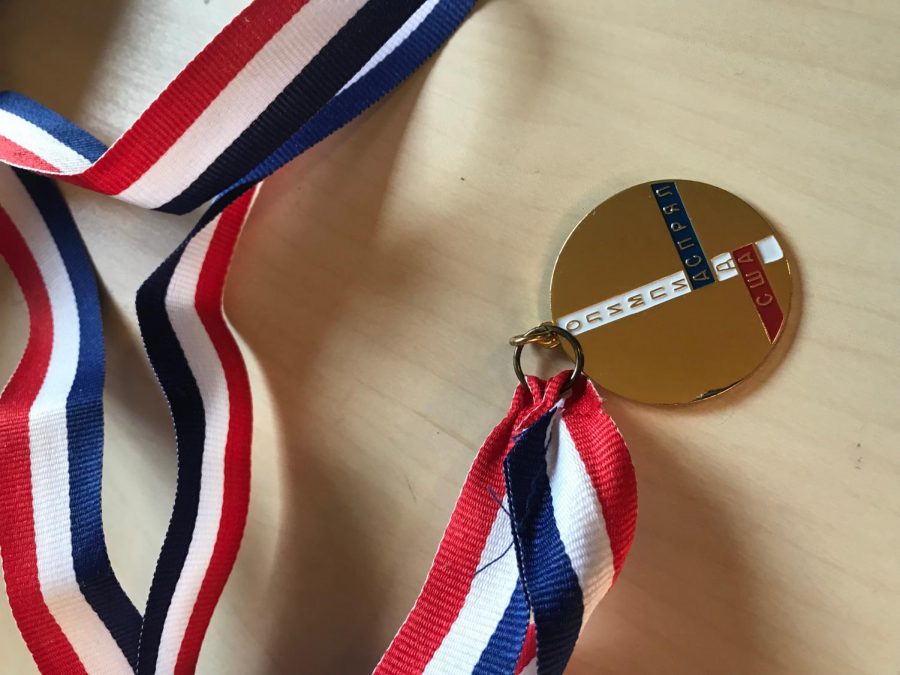 This is the award that, Ilana Trembisky, received when she won the competition.

Sophomore Ilana Trembisky received the award for having the highest score for outstanding achievement in the study of Russia in Md. during this year’s Olympiada of Spoken Russian that took place Feb. 17.

The American Council of Teachers of Russian (ACTR) created the Olympiada of Spoken Russian in the late 1960s, which is now the oldest of the ACTR’s secondary school competitions. Drawing on the long-established practice of oral exams and competitions within the Russian educational system, the Olympiada has provided a forum for American high school and middle school students to demonstrate their achievement in Russian language study, while conversing with native Russian speakers and meeting with students from other schools who are also learning Russian.

“This is my second year taking Russian in school, but I’ve known it since I was little, so I’m taking the class to improve my Russian writing,” Trembisky said.

“The work of the teacher, student and parent is really important for the success of the award,” Russian teacher Natalia Kolodina said.

Even though Trembisky has only taken Russian for a short period of time at WCHS, her hard work has finally paid off. Trembisky prepared for the competition by memorizing important geographical features in Russia and well known landmarks in the cities St. Petersburg and Moscow. She also had to recite a poem and converse in Russian with the judges.

“It was challenging to learn and memorize all the facts, but the actual competition was not too hard,” Trembisky said.

Participants may earn gold, silver or bronze medals in recognition of their proficiency in Russian conversation, poetry recitation and Russian civilization at various levels of study. Tremnisky received a gold medal displaying her knowledge in Russian language and culture.

“It was a fun experience,” Trembisky said.