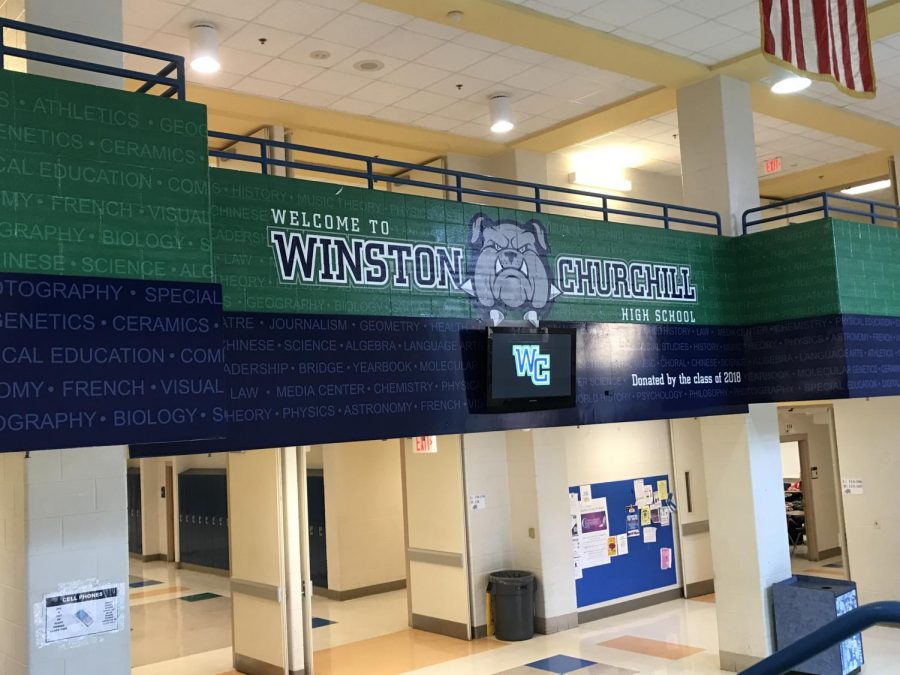 The Class of 2018 donated the CHS logo painting for the bulldog lobby as a senior gift. It's just one of the many changes accompanied by the 2018-2019 school year.

With the arrival of the 2018-2019 school year and a new principal, CHS has decided to make some new updates to its building and facilities.

These changes include painted hallways, a new median to direct traffic for carpool lanes, urinal dividers in the boys’ bathrooms and a new walkway tunnel entrance to the main office. Some of the changes have been made by the direction of principal Brandice Heckert while others were mandated by MCPS or planned before Heckert arrived.

“Getting rid of the peach and yellow paint was something I wanted to do,” Heckert said. “However, it is more than that; the idea of owning your space and making it a welcoming environment was another reason for it.”

Many departments have chosen to spruce up their offices by painting them blue and green, while the Bulldog Lobby was painted with the CHS name as a senior gift from the class of 2018.

“The Bulldog Lobby feels a lot more welcoming because the hospital white is gone and more of a color pop is featured,” senior Roya Nassaj said.

Before the school year began, the topics of parking and traffic patterns were a major concern and something the PTSA wanted to with Heckert on.

“A subgroup of the PTSA that deals with safe traffic patterns wanted to see upgrades,” Heckert said. “So we put in a ‘pork chop’ [before the carpool lane] to create an entrance only and exit only on the other side to help flow the traffic in from the left and right.”

In years past, cars would form their own two lines. Now, with the installation of the ‘pork chop’, there is a designated entrance and exit line that improves drop-off and reduces the probability of an accident.

Another new update took place inside the boys’ bathrooms, though the plan did not come from Heckert.

“The bathroom upgrades, however, were already in place when I got here,” Heckert said. “I had no idea there were no urinal dividers and that was already in the budget before I got here.”

For many male students, urinal dividers are a huge upgrade, for it provides more privacy and comfort.

“The new urinal dividers were a much needed upgrade and we had been complaining about it for years,” senior Joseph Gardemal said. “I feel a lot more comfortable going to the bathroom now.”

When it came to the main office, in past years, people would ring the doorbell to be let in right into the school. With recent updates, that is no longer possible. If someone wants to enter through the main entrance, they must ring the doorbell to be let in and then they must walk through a clear tunnel that takes them to the office to be checked in.

“The tunnel structure is new for every high school, except the two that physically had no space for it,” Heckert said. “The way it is intended is after the school day starts you have to ring the doorbell to come in, the office releases the door and since the doors to the school are locked, you have to come through that tunnel.”

This new tunnel came from needs for upgrades to safety and security in MCPS high schools after an MCPS study conducted last year.

“At first I was confused as to why there was a new tunnel; however, now I really like how MCPS did that and was looking out for our safety,” freshman Miyah Falk said.

An upcoming addition to the updates includes a fence that is being planned to go on both sides of the CHS sign by the bus loop in order to make people use the crosswalks to enter the building.

“If a fence is placed in the bus loop, it forces you to cross where the crosswalk is and that is another safety measure,” Heckert said. “It will not be an ugly chain link fence; it will be a black fence that really blends in and it will not affect any parking, but it will force those students to cross using the crosswalks and not the bus loop.”