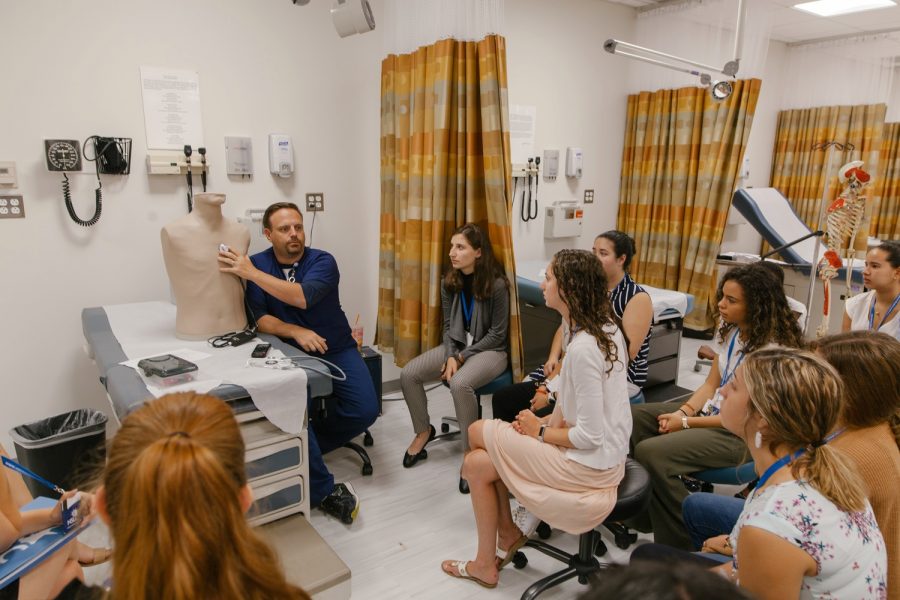 Junior Paula Hayden attended a nursing program this summer, where she learned more about the field of nursing throuigh medical professionals.

The New York University (NYU) School of Medicine announced Aug. 16 that it will cover the full tuition, roughly $55,018, of all current and future students regardless of financial need or merit. The goal is to help encourage all students to pursue their dreams without student debt getting in the way.

“I think it’s important that everyone be given the chance to pursue their dream career,” junior Paula Hayden said. “If paying their tuition is a way of achieving this, I commemorate NYU for taking such a risk. I think it’s also important because doctors can make such an impact on a person’s life.”

Hayden attended a National Student Leadership Conference (NSLC) nursing program this summer, where she learned what it took to become a nurse. The program, which included meetings and lectures held by people in the field of medicine, helped cement Hayden’s dream of becoming a nurse.

“I believe NYU’s decision to give free medical school tuition is a great way to promote the career,” Hayden said.

While medical school tuitions are still on the rise, this milestone has attracted the attention of many prospective pre-med students.

According to an Aug. 2018 NYU Langone Health article, NYU School of Medicine is the only top 10 ranked medical school in the nation to wave its students’ yearly tuition.

Though the scholarship does not cover additional fees, such as housing, personal expenses and textbooks, it still reduces the weight of costs.

“NYU’s decision really hits close to home because the primary reason they offered free tuition is the lack of motivation many medical students have to become internal physicians, like my mom,” junior Robin Bali said. “They feel the need to get better degrees and higher-paying jobs in other fields, rather than realizing there is a scarce amount of physicians in primary care.”

As a Suburban Hospital Medical Explorer Officer, Bali has been exposed to what medical careers look like through a different lens.

This opportunity opened up chances to learn more about possible paths to take and how to pursue a job in the medical field.

Hoping to pursue medicine in the future and continue research in a MD/PhD program, Bali is one of many CHS students who are optimistic about what the future of medicine holds.

The NYU School of Medicine’s decision has impacted the medical field tremendously and has set a precedent. Both current and future NYU medical students have a chance to take full advantage of the opportunity presented.

By covering the tuition costs, hopefully more future doctors will try to pursue non-specialist medical jobs as tuition will not play a huge factor in their decision of what fields to enter.
“I’m very happy to see NYU offer a unique opportunity that diversifies one of the many paths in the pursuit of earning a medical education,” Bali said.