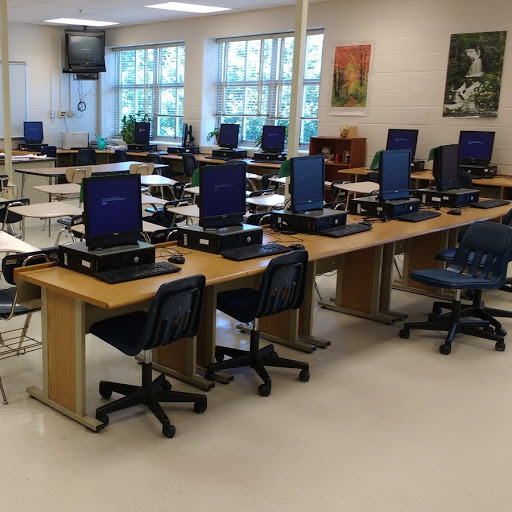 This year, CHS’s computer science department is is seeing lots of change, specifically the relocation of all three of their classrooms within the school.

“I liked the placement of the classes last year because the computers were in one central location,” said Programming Three senior Carl Cappellino. “Now, I feel as if the department has split–some of the programming teachers, who have classes upstairs and downstairs.”

“[The movement of the classrooms] is very stressful,” said Hadley Steelman, Programming One, Two and Three teacher. “The 130 rooms are very difficult to teach in. You can’t see all of the students from any one place.”

The department was not provided with a reason for the room change by administration.

“I have asked [why] many times and in many forms,” Steelman said. “I sent many emails and a memo but got no response to any of it.”

This change has come with a variety of consequences. In room 130C, students cannot see the Promethean board from the computers, which inhibits fluid learning during class.

“One of the best things about programming class was that we could seamlessly go from instruction to working on the computer, but we can no longer do this,” said senior Kelly Xavier, a student in AP Computer Science Principles and Programming Three.

Additionally, the boxy layout of the room inhibits the ability to work collaboratively and receive help easily.

“I think what we are missing is the circular [layout] where students can work together and I can sit down and help them,” Steelman said. “I can’t get into those corners to help them.”

The department formerly had an upstairs office across from the labs,where students could work in small groups during class and at lunch.

“They are so used to being able to roll around and help each other and work with each other, but now they just can’t,” Smith said.

The new department office is located between technology classrooms on the lower level of the school.

“We have to walk through other people’s classrooms to get to the office,” Steelman said. “We’re all good with it, it’s just hard.”

Students have found that getting help from their teachers during lunch is more challenging now due to the size and location of the office.

“I developed great relationships with my programming teachers over the years and frequently came in [for] lunch to work on a program, but now with this new office arrangement getting help during lunch is a lot harder,” Xavier said. “It is the most detrimental to kids just starting out programming who need help figuring out a whole new language and the logic that goes along with it.”

At lunch, the department has gone from offering five open labs to only three, with one lab for all five teachers to share.

“We used to be the overflow [space] for the Writing Lab and the Media Center and we can’t do that anymore,” Steelman said.

According to Smith, another concern is where student clubs are going to continue to meet, as there is no set place right now.

Another issue in room 130A is that the computers have not been working due to the slow Wi-Fi connection.

“All of the curriculums are online and those students just haven’t been able to get much done,” Steelman said.

“In the AP Computer Science Principles classroom, we do not even have computers and are forced to work off of slow laptops,” Xavier said. “The pace of the course is very slow due to the laptops we were given.”

The class capacity increased to 35 students this year from last year. According to Steelman, if all of the laptops worked, there would be just enough for each student in the class.

Advanced level students utilize the programming software, Eclipse, which only runs on laptops. Therefore, chromebooks are not an option.

“We have robotic software that we are going to use on the laptops and desktops, so we’re wondering if that’s even going to work because that is something that we need,” Smith said. “That’s not web-based.”

Students have mixed attitudes about the change.

“I had two years worth of class time in room 248 so it felt like home to me,” Capellino said. “We did laugh a lot in 248, so being in the new room has a different feeling. But we just need to be together to learn.”

There is also a strong desire for the classes to be switched back to their old location.

“I believe that computer science is just as important as any other subject and should be treated as such,” Xavier said. “We need classrooms with fast computers, arranged in an appropriate manner, and a classroom just for computer science teachers to hold office hours during lunch for helping students.”