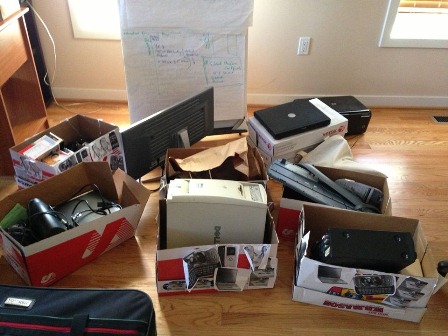 CHS runs the drive through e-collaborate, a non-profit organization founded in 2010 by CHS alumna Naina Boveja.

“I started e-collaborate in 2010 with the idea of connecting communities via technology,” Boveja said. “I saw how much people could benefit from technology and thought it would be a good idea to create programs that could connect people in different environments together.”

Donations included headphones, cellphones, cords, rechargeable batteries and laptops. The technology collected from the drive will benefit schools all over the world. E-collaborate’s most recent donation went to the Atitlan Multicultural Academy in Guatemala, and their next donation will help students in the impoverished areas of Managua, Nicaragua.

“We personally delivered smart phones, tablets, cameras, and more to the school,” Boveja said. “The students were amazed because most of them had never seen any of this technology before.”

CHS is the first school to participate in e-collaborate’s program. The program hopes to expand to other schools in the area and hold another drive at CHS in the spring.

“It felt great because instead of throwing old stuff away, we could donate it to help other kids so they can experience the same joy and entertainment that we do when we use electronics,” Lee said.

The Civitans Club does many projects throughout the year to help people all around the world. They also held a book drive this month to help kids in Montgomery County.

“We’re helping people around the world with stuff we don’t need,” Zuckerman said.