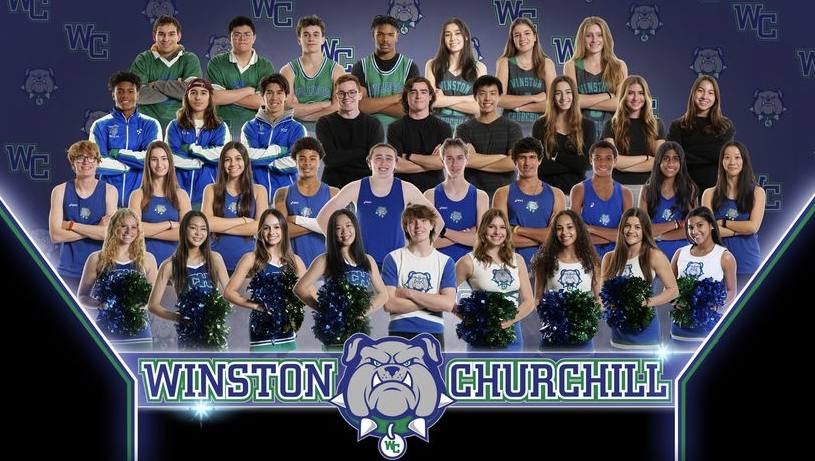 WCHS winter sports team captains pose all together. Their leadership and hard work helped lead all teams to great seasons.

Successful: one word to recap the WCHS winter sports season. After a winning-filled fall that included unprecedented Bulldog spirit, the momentum and expectations bled through to winter sports teams. They delivered, facing triumphs and difficulties, but ultimately all of them coming out of the season with great records and many of them with championships. In the past WCHS may not have been considered a sports powerhouse, but after the performances of teams over the 2021-2022 winter season, WCHS has been put on the map as an athletic school who can compete at a high level in a wide array of sports.

“In my almost 25 years as a coach or athletic director I have never seen such success from one of my winter athletic programs as what I saw here this winter,” WCHS athletic director Jesse Smith said. “Every season you hope that all of your teams will be competitive and maybe one or two of them will end the season as one of the top teams in the county. Never did I imagine that all of our teams would be at the top in the county and state.”

Congratulations should be given to all of the athletes and coaches who contributed to this fantastic season.

With new uniforms, a flashy photoshoot and two new transfers as a start to their season, the WCHS boys basketball team certainly had a lot of expectations to live up to. They put their money where their mouth was, losing only two games all season. With a huge fanbase consistently supporting them once they were allowed, the team showed their strength and proved to the area that WCHS is not a school to look over, even being placed in the Washington Post’s rankings.  After overcoming adversity with a loss to BCC and a brawl towards the end of the season, they recomposed themselves and went into the playoffs strong. There they made a deep run capturing division, regional and county titles, even going all the way to states where they lost in double overtime after a tough fight.

The WCHS girls basketball team had preseason doubts surrounding their performance this year with half of their previous team graduated since their last season and senior captain Irene Haramis tearing her ACL. They proved their continued success with a 17-3 record and capturing of a division championship and then regional championship. With many commanding wins and defeats of rivals, the group of 13 formed together to advance all the way to the state tournament. In addition to playing together, the team emphasized culture this year and became close friends making the atmosphere very cohesive, leading to even better play. Captains Dillan George and Chelsea Calkins both had consistently excellent performances which led to the 4A South player of the year and 4A South defensive player of the year awards respectively.

Speed and family were the combination for success this year’s WCHS indoor track team. Their indoor track season visions were greatly altered due to the COVID-19 case increases when indoor competitions became outdoor “polar bear” meets. Gritting through the cold weather, the team practiced hard all season and competed highly. They built a team community that allowed them to push one another to be better and also have fun while doing it. An amazing 29 runners qualified to compete in regionals for WCHS. Students from all grades represented the Bulldogs in their individual events and relays; speed and determination gave athletes success. Moving deeper into the season, five events qualified to advance to the state meet where they placed fifth overall. Langston Major finished second in the 300m, Sebastien Breton ran to third place in the 3200m as did the 4x400m relay team of Nathaniel Encinas, Henry Burd, Major and Ethan Yen, the 4x800m team of Griffin White, Colin La, Braden Welby and Encinas together got fourth and Burd attained fifth place in the 1600m.

With a brand new coach this year the WCHS swim and dive team came together for the first time in two years, but did not let time missed get in the way of accomplishments this season. Both the boys and girls, swim and dive, won meets and even bigger championships this year. The team went 6-0 in their regular county meets, and the boys team won the divisional meet to bring the title home to WCHS. Not content with the division title, the boys team continued on during subsequent weekends to also capture a Metros and state title. A state title was a feat accomplished by WCHS in 2019, but with a fresh team they were hungry for the repeat which the boys team was able to accomplish together. On an individual level many athletes had great performances. Brady Begin won the 500 freestyle, the relay team of Kyle Wang, Ethan Fu, Samir Elkassem & Nasim Elkassem won the 400 Freestyle Relay, and Georgia Yang captured the 100 butterfly state championship.

For the first time in WCHS history the bocce team won the county championship. The team, composed of ten members, formed a tight community and is a great opportunity to meet new people and bond while improving as a team and competing highly. During the regular season the team went 4-1. After a strong performance at the division tournament hosted at Churchill the team traveled to Paint Branch to compete in the county championship. It was an outstanding tournament; Teddy Breder had great rolls and Avery Max nailed two game winners, cementing the points for bocce and earning them a well-deserved first county championship.

The #R2C (road to counties) was a success for the WCHS Poms team. They are now back to back county champions following their 2022 win. Leading up to counties they achieved success receiving two first place finishes, one second place finish and a sportsmanship award. Their routine showcased a graceful and skillful performance filled with kicks, leaps, and smooth choreography. The mask mandate for indoor sports such as Poms added more difficulty to their routine as the masks made it harder to catch their breaths in the middle of the intensity. Through hard work and practice they were able to accomplish a great final product and perform as well as they knew they could with spirit, energy and synchronicity resulting in a counties win.

Both as a team and on an individual level, the WCHS wrestling had one of their most successful seasons in recent history. Domination as a team led to a perfect meet season for the Bulldogs going 12-0 with three dominating victories containing victories by over 50 points. At the Patterson Invitational they went 9-0 and their regular season strength continued through to a regional title. The team then bleached their hair, a celebration of making it to the State tournament, an accomplishment they had not achieved in four years.  The team placed second to cap off a great season. Individually, Jaden Selby and Ethan Nasvaderani both captured the individual state titles in their weight classes. That came after a season in which Nasvaderani went 42-0 and Selby notably got first place in the Grapple at the Brook tournament and at regionals.