SOS lessons on depression are out of touch 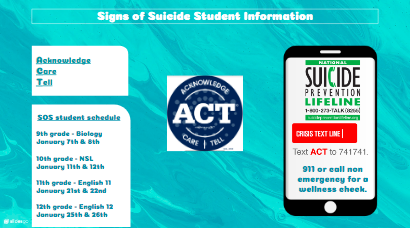 The counseling department made this one pager to easily show resources to use if you or someone you know is going through mental health issues.

By Allison Jacobs, Editor in Chief

At the end of the first semester, juniors and seniors had SOS lessons focused on depression in their English classes. The lessons included a video, as well as a presentation and a discussion from the counselor running the lesson. While the idea behind the SOS lessons was good, the execution and the video specifically, caused a lot of anger and disappointment among the students.

Mental health is an evolving issue and illness, which seemed to be the biggest issue the lesson had. The video depicted five different students all suffering from depression. However, the causes and the way they acted were so far from accurate.

The second problem with the video was how the teens were portrayed. All of the teens acted in ways that enforced previous stigmas surrounding mental health. They were all lazy, bed-ridden, no motivation students who openly could not see the good in life anymore. While this is definitely a sign of depression and depression can present itself this way for some, this is most definitely not the defining characteristic of depression.

Mental health is constantly changing, and especially at WCHS, high functioning mental illness is often common. The video suggested these teens barely moved, while many people are over-achievers who are trying everything to stay afloat. Teens can be waking up at 4 a.m. to workout, go to a full day of school, finish all their homework and make time to be with friends while still struggling mentally. While behavior can show symptoms of depression, it is not a tell-tale sign of it and the video enforces the stigma that depressed people are lazy and unmotivated. It presented the idea that people who are depressed are weak, and that is far from true.

Here is the thing about mental illness and depression: even though it is extremely common, everyone suffers differently and everyone’s journey is unique to themselves. Some people may share similar experiences and symptoms, but each person is trying to navigate their own life with their own struggles to the best of their ability. The video characterized teens with depression as the same type of person with the same causes every time.

Another flaw is how the students ask for help. While depression is common, many are embarrassed or shy when it comes to talking about their mental health. The video suggested that teens are simply going to say “I don’t plan on being around much longer,” and that was the only cry for help there could be. While asking for help is always good, not everyone will be able to simply say straight up that they are dealing with tough issues. It might take a sit-down, emotional conversation to ask for help and that is okay. The most important thing is getting help when you need it.

The reaction to the struggling was also inaccurately presented in the video. When one teen told his friend what he was going through, his friend responded with something along the lines of “Come on, you don’t mean that. You can get through this.” These words of encouragement were nice, but not what someone who is severely struggling will need at the end of the day. They need constant support and encouragement as well as talking to a professional or trust adult that will be able to get/give them the help they need.

Lastly, it was clear that the video was extremely outdated and old. This once again shows that there is no acknowledgment of the changing forms of mental illness, and emphasized the lack of knowledge surrounding depression in today’s society.

Overall, the video presented in the SOS lessons was embarrassing to watch as an MCPS student who struggles with mental health. Coming from such a highly ranked school that values education, it seemed out of touch and unaware of the current mental health issues and illnesses.

If you or someone you know is struggling with depression and mental health, please reach out to a trusted adult and do not be afraid to ask for help.