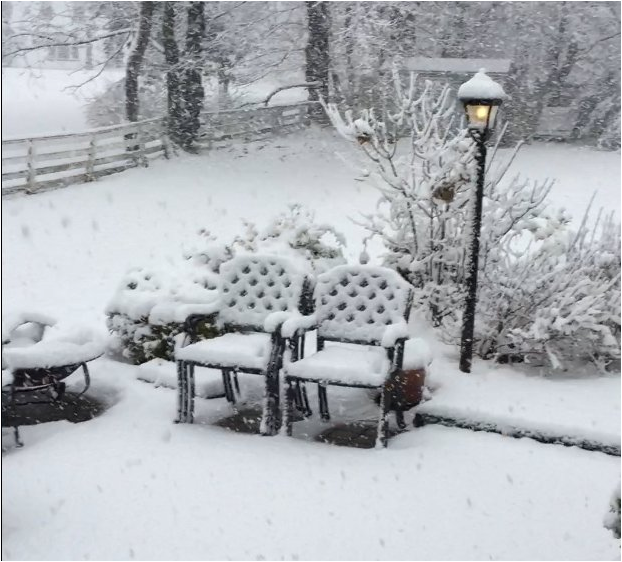 Snow piles up during a snow storm in Potomac, Md. during the winter of 2016.

Sleeping in late, staying in pajamas all day and drinking hot chocolate are synonymous with two things: snow days and the first semester, at a minimum, of the 2020-21 school year. The line has blurred with school being virtual, but as long as schools remain in this virtual environment, snow days will not take place. And that is wrong.

Yes, you could make the argument that the school system can forgo snow days. During winter weather in December 2020, Montgomery County Public Schools decided to continue with virtual learning because students were not impacted by the road conditions, as they did not have to go to school. There were already systems in place for students to learn at home.

But this should not be the case. The school system should give students and teachers the day off if a snowstorm that would have canceled school had it been in-person occurs.

First off, people associate snow days with fun. Sledding is fun. Snowball fights are fun. Drinking hot chocolate is fun. Even if the first two may end with the uncomfortable feeling of snow in your jacket, it still leads to memories of a good time.

Does the school system really want to take away another thing this year?

In addition, giving students snow days will give them a sense of normalcy. As previously mentioned, students have lost a lot this year. Sports teams have moved from the court to the Chromebook; going into the building is a lost cause; homecoming and other popular in-person events have more in common with unicorns than horses.

Having snow days will lead to people feeling normal. When students hear on the news that the area will get three inches of snow, the first thought (and, rightfully the only one) should be no school, not here’s another day of virtual learning. They can do their normal traditions without having to worry about missing a Zoom class.

Furthermore, snow days give students a break from the monotony of school. Every day seems to be the same: a combination of classes conducted over Zoom – where frankly three students with their cameras on is considered a high number, breaks of varying proportion and everyone’s favorite – homework.

Giving students an opportunity to get off their devices will make them happier, more connected with the outside world and save their eyes from the computer’s blue light. They can go back to being kids and having fun on their snow days. Plus, students will be more engaged in learning when they return the next day, having used the previous one as an opportunity to rest and relax.

The other side can make some good points. They can say that there is no need to cancel if no students are on the road. That is why schools are off for snow usually – it is about the road conditions, not students’ fun. School is already online, it is not like anything would need to change is another argument.

But, maybe we should heed the words of Bondy Shay Gibson, an Ed.D., who is the superintendent of schools in Jefferson County, W.Va. Gibson decided to give students a snow day, in a move that garnered nearly universonal support.

“For generations, families have greeted the first snow day of the year with joy. It is a time of renowned wonder at all the beautiful things that each season holds,” Gibson wrote in a Dec. 15, 2020 letter to parents. “For just a moment, we can all let go of the worry of making up for the many things we missed by making sure this is one thing our kids won’t lose this year.”

Three-quarters of Americans surveyed in December 2020 supported snow days, according to WPRI-TV. Let us do them a solid and keep snow days in the fold during this virtual time.