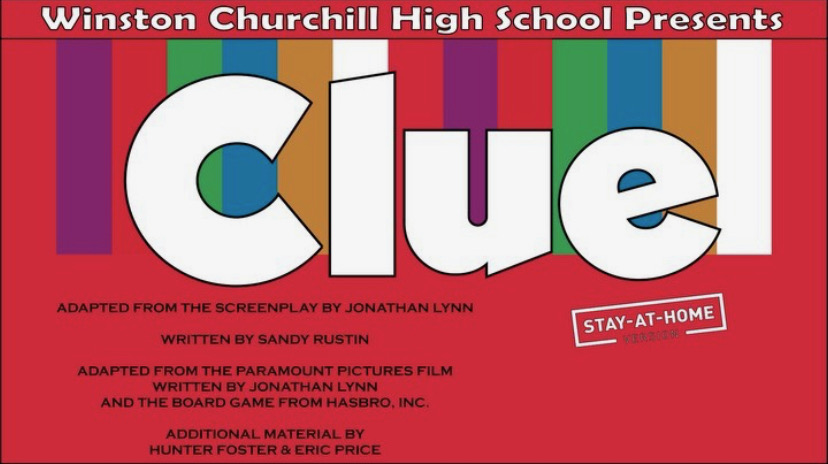 The beginning screen for "Clue: Stay-At-Home Version, available on the streaming service Broadway on Demand.

Figuring out how to put on a play during a pandemic was a mystery, but the WCHS Theater Department solved it in an original and innovative way. The prerecorded play entitled, “Clue: Stay-At-Home Version,” was made available on Jan. 15 for free on theatrical streaming service Broadway on Demand for fans of the classic murder-mystery.

WCHS Theater Department’s first-ever virtual production provided a safe and entertaining version of  “Clue,” written by Jonathan Lynn and adapted from the Paramount Pictures film and the board game we all know and love.

The best acting in the show does not come from when characters are actually speaking, but when they are reacting to others. With a “Brady Bunch”-esque set up, the audience can see the in-character reactions and deliveries with comedic timing that might have gone unnoticed on stage.

What really stood out from the production was the editing that created seamless transitions and comedic moments that would have been hard to curate on a stage. The show consists of a lot of running back and forth through different rooms of the mansion, which could have been very confusing, but the editing team brilliantly used a graphic of the actual “Clue” game board as a backdrop between scenes and edited moving game pieces to show which room the characters were going to next, making the setting very clear at all times.

Things that would be very hard to convey in a virtual production such as passing props, gunshots, lights turning on and off and bodies falling are done comically and impressively. Many actors even got the help of family members to play body doubles and gloved hands with weapons.

The many miscommunications and moments of talking over each other written in the script are made even funnier because the show was filmed using Zoom, where miscommunications are very common. Because the audience is so used to this setup, the show is almost modernized, despite the original game being 72 years old.

Promoting the play this year was done very uniquely, with a virtual Playbill and advertisements on Instagram as opposed to the usual yard signs and community flyers typically scattered around the WCHS area.

Without candy grams and WCHS’s version of  “stage dooring,” director Naomi Ratz got creative by using Padlet, an online notice board where people can post comments and shoutouts to the cast and crew. Recognition of the ensemble, crew and seniors, in addition to comments complimenting the method acting and costume choices, were posted.

“This was so fun to watch! I was so impressed with the acting, the editing and just the whole play,” one fan commented. “I am in awe of how much work went into this. Thanks to Ms. Ratz for allowing us to enjoy Zoom theater.”

Earlier this year, “Ratatouille: The TikTok Musical” was released online after the hard work and collaboration of many TikTokers and famous Broadway actors. Virtual productions such as this, and now “Clue” could potentially change the future of the entertainment industry, allowing wider access to theater and giving actors of all ages the chance to do what they love, even during a pandemic.

The resilience and creativity of WCHS’s Theater Department is abundantly clear with their virtual production of “Clue” and it is a must see for fans of the cult classic, or just those looking to support the gifted cast and crew involved.