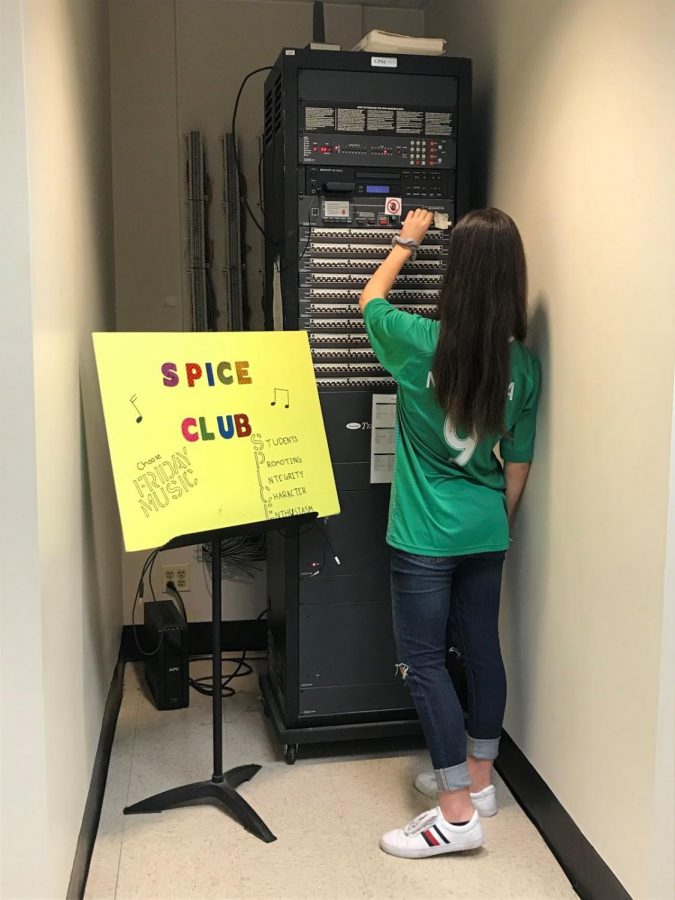 Every Friday a student official of the key club attaches their phone to the PA system and plays music. This makes every Friday calming and exciting for the students.

Sophomore Elizabeth Qiu looks up at the clock to see that there are five minutes left of the third period. She rushes to the teacher, showing him a slip of paper and dashes out the door. Qiu makes her way to the front office, slips into a room and plugs her phone into a machine. Seconds later, music floats throughout the entire school.

Qiu is a student official of the SPICE club, (Students Promoting Integrity, Character and Enthusiasm). The club is in charge of selecting and playing music on Fridays. Student members can put playlists or songs they like on a shared Google Document on Google Classroom, which will later be played on the speakers throughout the halls of WCHS.

“In addition to playing single songs, sometimes we have themes. Some of our themes have been USA day, Women Empowerment day, Tik Tok day and more,” Qiu said. “Our club really wants to promote a positive school environment at WCHS, and this is our way to do so.”

Music is extremely calming and can positively affect the mental health of students. According to a Aug. 2013 VeryWell Mind study, in a Dec. 2019 article, it was proven that music has an impact on the autonomic nervous system; people who listened to music typically recovered faster from stressors and tensions in their life.

“I do like having music on Fridays because it ends the day on a good note and the week in a great way,” sophomore Serena Shi said. “However, I feel like the music choice is always a 50/50 chance and it’s either a hit or a miss.”

Music on the announcements have to be appropriate, so many students do not enjoy the song choices that are appropriate for the school. Student officials of the SPICE Club try to play popular music, while also making sure the songs are appropriate and not explicit.

“I guess it’s centered around what songs I love and what songs the school will also love,” Qiu said. “We try to avoid sad, depressing songs, and we also take ideas from our friends, teachers and other students.”

For the SPICE Club, WCHS students’ mental health is their number one priority. Student officials and members work hard to collect songs that they hope will positively impact kids and help relieve stress.

“Music really relieves me of my stress because we always have tests and quizzes on Fridays,” Shi said. “It celebrates the weekend, and finishes a long week in a great way.”

Music on Fridays is a big part of the WCHS community and brings together the whole school. It relieves all the stress that was made during the week, and excites the students for the weekend.

“I think playing music is definitely beneficial, especially emotionally,” Qiu said. “You can’t really see it – it’s intangible – but people really seem to like and be uplifted by the music.”