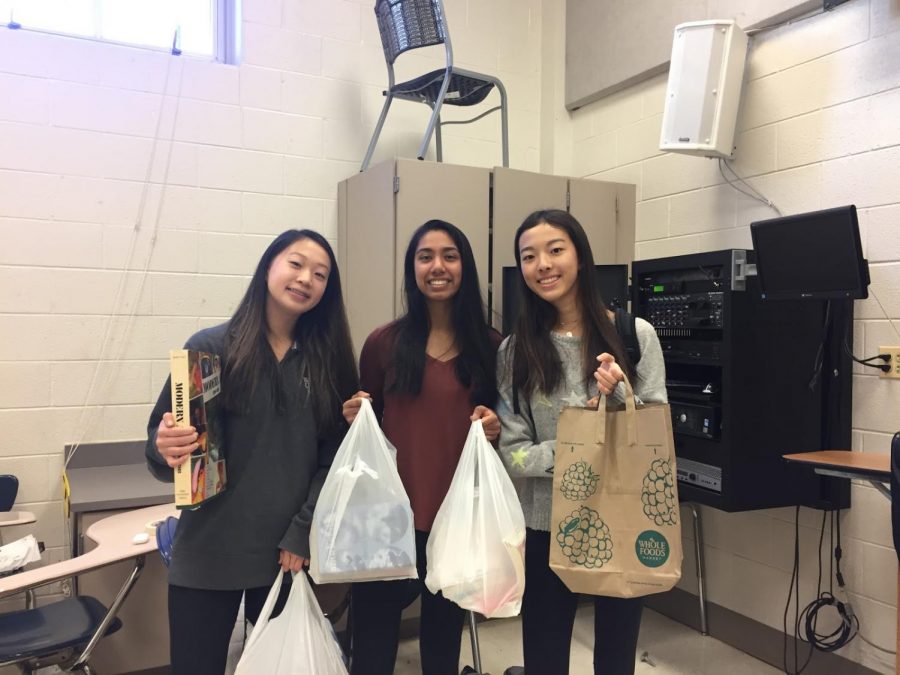 Sophomore Jessica Lin and her friends attended the EHS' fourth annual book fair. Lin bought ten books./Photo 2: Students browse the books at the EHS Book Fair. There were many different genres of books including fantasy, historical fiction and test-prep books.

The tables were lined with books of every color, size and genre. There was another table full of cookies and other festive desserts. It was the English Honors Society’s fourth annual Book Fair, held on Thurs., Dec. 12, 2019.

The event was spearheaded by English teacher Mary Dempsey, who runs the EHS. She wanted to donate the money from the fair to charity. The GIVE BACKpacks Program is run by MCPS and helps give back to kids in need of backpacks and other school supplies.

EHS students get service points for donating, so the majority of the books were donated by them. Non-fiction, fiction and test-prep books for AP classes and the ACT and SAT were among the book genres available.

“We have a lot of EHS members, and I was trying to think of a way to get a lot of members to help,” Dempsey said. “EHS members need service points – that’s just how Honors Societies usually work – and there’s 300 members so it’s really hard to think of ways for a lot of them to earn a lot of service points. By donating books they can easily gain service points, and it makes sense. It’s EHS and it’s books.”

After seeing the sign, sophomore Jessica Lin attended the book fair with two of her friends, and bought ten books from the fair.

“I bought a lot of fantasy books, young adult books and one art book,” Lin said. Along with the others, she also bought two self described academic books. She was a huge fan of the prices of the fair because books were sold for either $2 or $3, a relatively cheap price.

“I think these were actually worth more than $30, maybe $60 or more total,” Lin said. “Usually young-adult books are $16. It was such a good deal.” Lin estimated that her books were valued at around $230, after she looked up their prices online.

The GIVE BACKpacks Program is run through MCPS, and has been around since 2013. It helps students who can not afford backpacks and other school supplies. The program has raised enough money to buy more than 70,000 backpacks.

“We bought backpacks for MCPS students from schools who can’t afford it,” Dempsey said. “There’s a MCPS program called GIVE BACKpacks, so we donate to that and we choose lower-income schools and give them backpacks.”

Lin’s $23 could provide two students with a backpack and other school supplies, according to the GIVE BACKpacks Program website.

“I feel really good [about supporting the charity],” Lin said. “I wish I could buy more books to support them, but I don’t think I could carry all of them home.”

In the past, Dempsey has raised between $200 and $300 from the fundraiser. This year, Dempsey sold around $300 worth of books, enough for an entire class to receive backpacks.

“I hope the students get some cheap books and enjoy the community feel of the book fair,” Dempsey said.