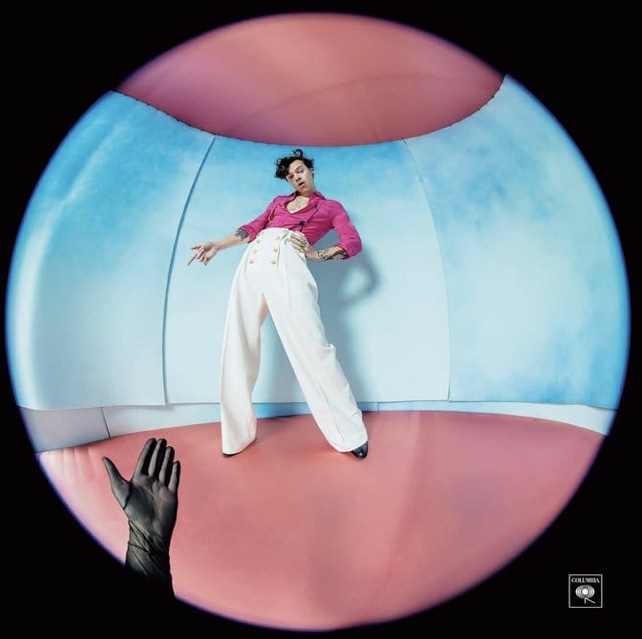 Former One Direction member Harry Styles walks a fine line. He doesn’t follow the mainstream. He crafts his own unique style.

Back in 2017, Styles released his self-titled debut album. He was the heartbroken ex-boyfriend. He was the lovesick teenage boy. In 2019, Styles has released his second studio album “Fine Line” on Dec. 13, the same day as ex-girlfriend Taylor Swift’s birthday. Styles seems to be more confident, showcasing his soulful voice and his ‘70s sound. He’s changed, and so has his music.

Styles dominated the charts two years ago with his songs, “Kiwi” and “Sign of the Times.” Now that he’s back, he’s dominating the charts again, with “Fine Line” ruling as the No. 1 album of 2020.

“Lights Up” is the lead single of the album, and it’s largely about self-discovery. The music video finds Styles in a swarm of naked people, questioning his sexual identity.  One of the most repetitive lines in the song is, “Do you know who you are?” He is saying that the people we surround ourselves with do not define us. It is about how we define ourselves first. The verses are catchy and bright, and the chorus features finger-picking on an acoustic guitar. The slowness of the chorus leaves more room for listeners to create their own meaning, as Styles paints a picture with his lyrics.

In a Dec. 14 interview with The Guardian, Styles talked about his artistic choices regarding his sexuality. He declined to answer questions specifically about his sexual identity and said that he wishes to keep this type of information to himself.

“Adore You” is one of the album’s happier songs. Styles sings, “I’d walk through fire for you/ Just let me adore you.” It’s impossible to hear the song the same way after seeing the music video. The music video features Styles taking care of a fish he found, and then eventually deciding to let it return to its ocean home. Even though the video is about a friendship with a fish, the song is still relatable because many people know what it’s like to love something and then let it go. It’s also quite difficult to resist dancing to this song’s infectious beat.

“Watermelon Sugar” might have the most danceable beat on the album. This song, in particular, is catchy, interesting and most importantly, fun. Styles stands out from other artists because it’s easy to tell by listening to his album that he had fun making it. Styles sings, “I don’t know if I could ever go without watermelon sugar high.” His “watermelon sugar high” might be a metaphor for the way that one feels when in love.

“Cherry” is also about love, but it’s not about falling happily in love: it’s about falling out. The song also ironically has nothing to do with cherries. It’s about Styles’ ex-girlfriend, Camille Rowe. The track uses a lot of guitar in the beginning but ends with a voicemail of Rowe’s voice. Even though it is a unique artistic choice, her voice sounds haunted. If Styles was aiming to express the aftermath of feelings of a relationship, he accomplished his goal. The song reminds listeners of the quiet pain that comes once a relationship is over, as a person clings on to traces of his or her former lover through things like their voicemail.

Some of the album’s best moments are its quieter moments. From the first listen, “Falling” sounds like a regular piano pop ballad. It easily could have been generic, but the sincerity in Styles’s voice makes it worth the listen. He sings, “What am I now? What if I’m someone I don’t want around?” He questions his identity, trying to understand who he is without his lover.

Overall, the album is confident, catchy and worth every listen. His first album was great but this one is even better since it’s clear that Styles is growing as a solo artist. He’s also trying different things musically, which only adds to his appeal. He is performing at the Capital One Arena on June 28, 2020, and any WCHS students who are interested should definitely buy any tickets left. You’ll get to witness the vibrant energy that is Harry Styles, as he walks down the stage with the kind of confidence that never goes out of style.