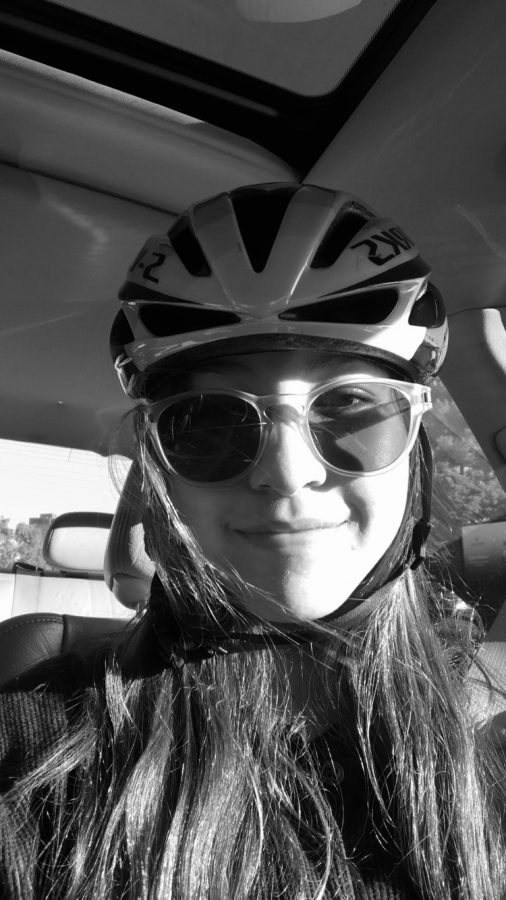 Stephanie Zoltick wears her helmet before a bike ride. Zoltick prioritizes safety and knows the consequences of riding without a helmet.

A lesson that is annually drilled into the heads of little kids all across the world: “Wear your helmet while riding your bike to prevent head injury.” However, according to recent studies, the number of bicycle accidents due to not wearing helmets is skyrocketing. Maybe little kids should not be the only ones who are preached this lesson.

According to the Sept. 2019 Washington Post study, only 22 percent of bicyclists in cycling accidents wore helmets. A majority of the bicyclists who wore helmets during accidents were in the hospital for a shorter amount of time and sustained fewer injuries than those who did not.

That staggering statistic consisted of only adults. Only 12 percent of riders younger than the age of 17 were wearing helmets during accidents. Pre-teens and teenagers are increasingly choosing not to wear their helmets.

“I do feel like I am forced to wear a helmet as my parents always make sure I am wearing one, but I know it is for my safety,” WCHS sophomore and bicyclist Stephanie Zoltick said. “It is one of my top priorities to always wear a helmet, especially since I have heard of countless bike accidents on the news recently.”

Being safe while commuting on a bicycle must be a top priority for all ages. According to a 2019 Bay Area Bicycle Law article, helmets do not just protect your head, but they also protect your face, especially the eye area which was most shielded from impact.

“I think that it is a necessity to wear one because it saves people’s lives,” sophomore Jason Tran said. “I’ve heard stories about people not wearing helmets and getting into tragic accidents. I never want that to happen to me.”

According to a Sept. 2019 Science Daily article, researchers stated that young people may not have tendencies to wear helmets because they have a lack of access and knowledge.

Even to teenagers in high school, a reminder to always wear a helmet while riding to school or anyone else is important.

According to The Bicycle Safety Institute, there isn’t an official federal law that requires wearing a helmet while biking. More than 20 states have helmet laws for riders under 18.  Researchers have noted that helmets are said to be “annoying” and “uncomfortable”. Regardless, Zoltick urges others to prioritize safety.

“I think people who don’t wear helmets are generally lazy and are not concerned about their well being,” Zoltick said. “They might also think helmets aren’t cool. I would say to these people that they are crazy and fashion shouldn’t be a higher priority than safety.”