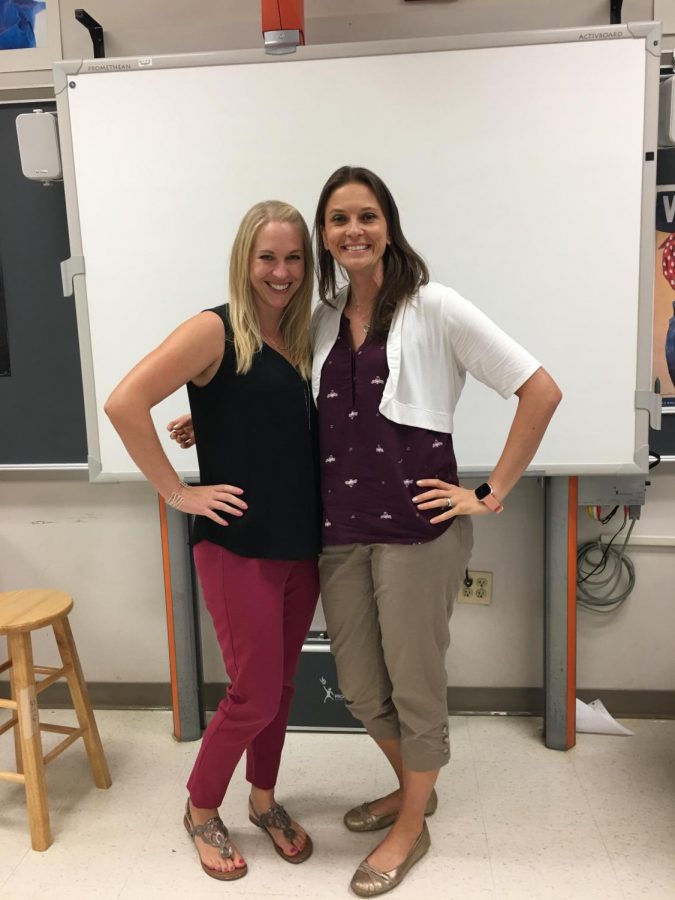 Amanda Marshall (right) and Erin Brown (left) have been friends at WCHS for almost 13 years, and enjoy many afterschool activites together

Friendships are said to reduce stress, prevent loneliness and provide support through tough situations. At WCHS, students are not the only people who need friends.

When teachers find someone in the building that shares similar interests, is in a situation similar to theirs or someone they have a lot of chemistry with, it instantly makes their school day better. Finding someone that they can depend on and trust helps many teachers get through the school day.

“When things get really frustrating, it’s nice to have someone to come complain to without worrying about anything,” AP Lit teacher Haroot Hakopian said.

AP Lit teachers Hakopian and Jeffery Savett have been friends for twenty years, starting when they both started working at WCHS. They both are proud members of the English department, and teach AP Lit. Their relationship is the product of many years working together, similar interests in what they teach and joking personalities that match well with each other.

“Because we have been here so long and been friends for so long there’s no context needed for our conversations,” Savett said.

While Hakopian and Savett are usually busy helping students during lunch, they are both off during seventh period and will routinely stop by each other’s room. Like any relationship, friendships at school take time and effort. While teachers might be friendly, they might not be as close to each other as others.

“I get along with everyone I work with, but to hold those sorts of relationships I have with Mr. Savett would not work,” Hakopian said. “You wouldn’t have that much time.”

Most teachers are friends with teachers in their department. The proximity of their classrooms, similar interests and WCHS’s many extracurricular activities causes them to bond.

Brian Clark and Scott Rivinius both teach AP Comparative Government which is a class that compares governments of different countries such as Nigeria and Iran. Clark and Rivinius’s relationship started because of their common interest in the course when Clark came to WCHS three years ago.

“He really helped me because I had never taught that class before,” Clark said. “He gave me a lot of resources.”

Clark and Rivinius go to the WCHS athletic games together and also participate in fantasy football leagues together. They are also interested in movies such as the Rambo series, a series of action movies.

Amanda Marshall and Erin Brown have been friends for almost thirteen years when Brown came to work at WCHS. They are both inside school and outside school friends, with them carpooling to work together, going to musicals such as Hamilton, participating in marathons and doing crafts together.

“The days we carpool versus the days we don’t carpool are drastically different and just having someone you can eat lunch with, or go to if there’s a problem, makes all of the difference in the world,” AP Psych teacher Amanda Marshall said.

Marshall and Brown connected over the similarities of their situations. Since they carpool to work often, they always have something to talk about.

“We have a lot in common, so during our rides to and from work everyday, we are pretty much-talking non-stop,” AP Euro teacher Erin Brown said. “We have kids that are similar ages and we have similar interests, so it’s nice to share what’s going on and get advice.”

Friends outside of the school system wouldn’t understand the struggles that teachers face. When teachers find someone to rely on at school, it is a great stress reliever and helps them get through the day. Brown and Marshall know that they can count on each other when there is a problem, and their trust in each other makes their friendship strong.

“We get it because we are living the same thing, so our context gives us so much that it already makes sense,” Brown said.  “I don’t have to explain the situation she knows it. We can understand each other quickly in a way that even a good friend outside of the school system just can’t in the way that we can.”

Teachers look for someone who will make them laugh, someone they can depend on, and someone who enjoys similar activities. While a teacher’s relationship with friends inside of school might be different than out of school friends, the process of working in the same place creates similarities, and history, which are two important pillars of friendship.

“We have so much in common. Yes we have distinct pieces of our personality and things that we like separately but together we’re like peanut butter and jelly,” Marshall said.