Rapid automation is affecting the economy 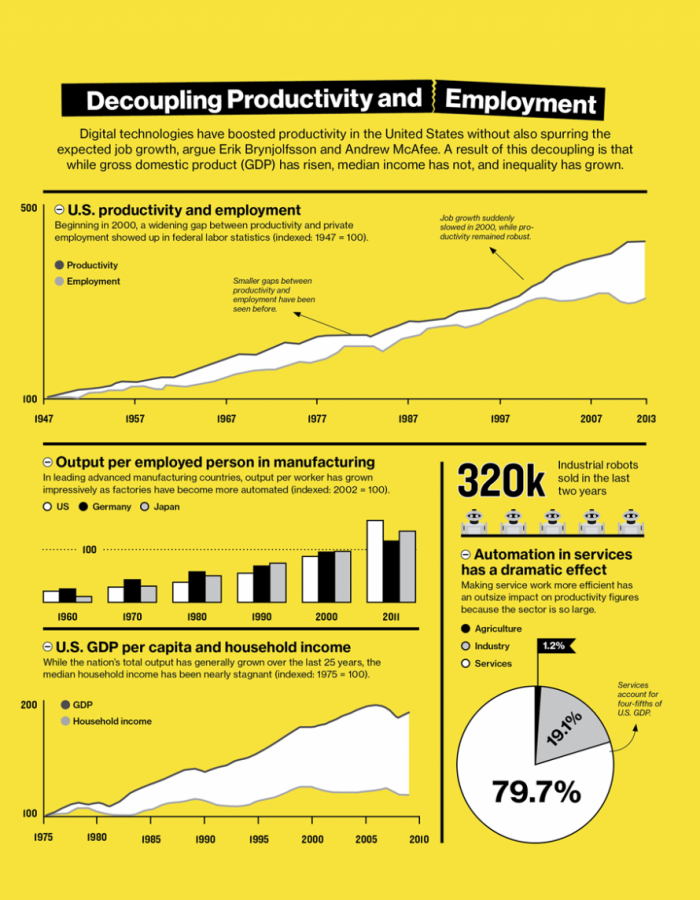 Professor at MIT’s Sloan School of Management, Erik Brynjolfsson’s chart showing the correlation between productivity and total employment in the United States. It highlights how technological advancements have both positively and negatively affected our economy.

From high school to college to graduate school, students strive to pursue higher education in an attempt to build the credentials that they hope will aid them in landing the “perfect” job. The mentality is this: the more degrees, the more job offers. Logically, it makes sense. It worked for our grandparents’ and even our parents’ generation. Having a bachelor’s degree was enough to land that “perfect” job and live a financially stable life. Unfortunately, times have changed. Thanks to advances in computer technology, from improved robotics to automated services, have forced thousands of jobs to go extinct. Automation is reducing the need for people in many jobs.

According to Business Insider, thanks to the efficiency of the internet and the powerful technological advances that have been made, GDP and productivity have increased in the past few decades. However, jobs and the middle class are now disappearing.

Robots, software and automations are able to replace jobs ranging from the factory to the travel agency to the doctor’s office. Newly developed automated systems have slowed down employment growth, which are putting workers in difficult situations. In fact, we are witnessing the start of a new trend: where more jobs are being destroyed than created. According to Wendell Wallach, a consultant and scholar at the Yale University Interdisciplinary Center for Bioethics, if this trend continues, the US and other countries abroad could face an economic and social crisis. It could contribute to the stagnation of median income and increase the wealth gap in the United States.

“This is an unparalleled situation and one that I think could actually lead to all sorts of disruptions once the public starts to catch on that we are truly in the midst of technological unemployment,” Wallach said.

Erik Brynjolfsson, a professor at the MIT Sloan School of Management, has the most cutting-edge theory. In economics, productivity is an important indicator of economic growth and wealth creation; it is a measure of progress. On Brynjolfsson’s productivity chart, there are two lines representing productivity and total employment in the United States. From 1947 to 1997, the lines remained relatively close to each other. When there was an increase in jobs, there was an increase in productivity. As the number of businesses created rose, more jobs were generated and the country as a whole grew in richness, which led to more economic activity, which led to more jobs. Our economy was in a positive loop. However, starting from 2000, the lines started moving farther and farther apart from each other. As productivity increased, total employment started to fall. By 2013, there was a significant gap. It seemed like the old rules don’t apply anymore. Why is that? According to Brynjolfsson, it is because of technology.

Technology boosts productivity and in return, makes societies wealthier. However, it has a negative side. Technological progress is eliminating the need for jobs that could be done by machines and are leaving many workers worse off than they were before. According to MIT Technological Review, our economy’s productivity levels have never been higher, but the number of jobs available and average median income have never been lower.

There have been solutions proposed to combat this crisis. 2020 Presidential candidate Andrew Yang’s Freedom Dividend calls for a universal basic income of $1,000 per month to every American adult over the age of 18. His theory is that if we start “putting money in the hands of the people,” there would be a boost and support to job growth and the economy. Whether this solution will work is still undetermined.

But no matter, if our society does not take action soon to combat this crisis, future generations will be forced to live with the consequences. The wealth gap within our country will continue to grow and more economic and social issues will come about. It is a race against the machine and more people are likely to lose than win.