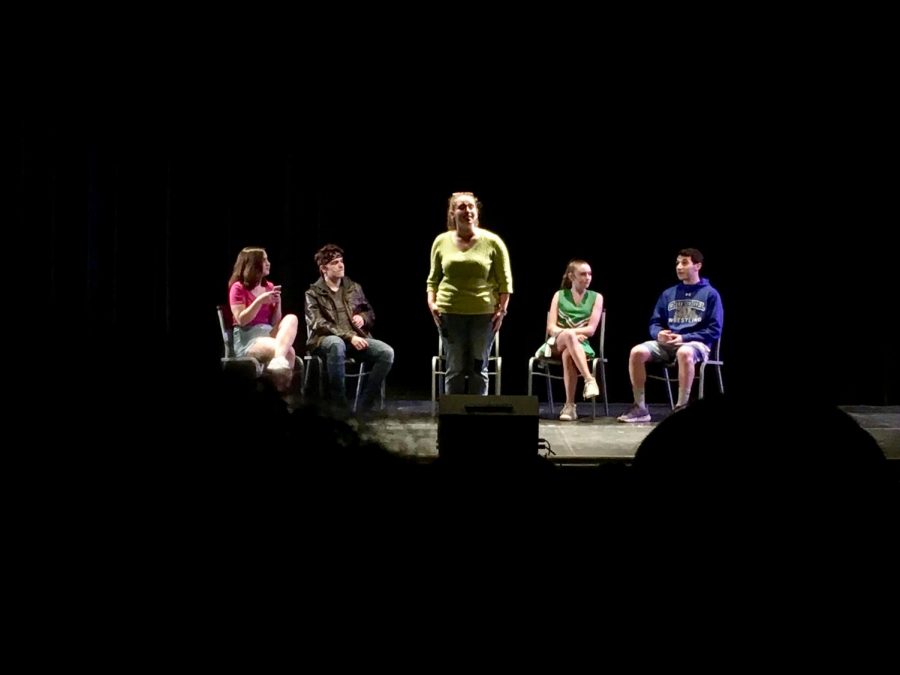 A horde of zombies, a crazed director, a pharmaceutical marketing team, and a man with one arm all appear on one stage over the course of two hours. No, this isn’t a horror movie, or a mistake: it’s WCHS One Act plays.

The performances took place on May 1st in the auditorium, and were completely casted and directed by students. They were directed by seniors, as a way to commemorate their time in the drama program. The drama club hosted the event and admission was free, with donation buckets at the exits to sustain the WCHS theater program. The accessibility of this event was what made it so appealing, and attendance was so high that the drama club ran out of programs to give to attendees.

Each play was about 20 minutes, and included a dynamic use of scenery. The first play, 10 Ways To Survive The Zombie Apocalypse, inventively clustered desks to look like bushes, adding to the apocalypse vibe of the play. The simplicity of each backdrop, with the use of desks and chairs to set the scene for seven different plays, added to the charm of One Acts. The clever and creative scenery did not distract, but instead allowed the performers to shine in their roles.

In 10 Ways To Survive The Zombie Apocalypse, directed by Vincent Douglas, four strangers, Christy (Tanvi Naville), Susan (Heather Kirschner), Sam (Julian Silva), and Jimmy (Anthony Albayaty) worked together to survive a zombie apocalypse, all while being guided by two sarcastic narrators (Dominic Cammaroto and Phoebe Chambers). The play was light-hearted and comical, and started the night with a bang. The performers used the entire stage masterfully, and created an action packed dialogue. From attempting to “romance the zombies,” to darting across the stage, this play showed that there is certainly more than one way to survive a zombie apocalypse.

Following was Football Romeo, directed by Michael Votaw. The play follows a Shakespeare crazed teenager Nicola (Sydney Rubin) attempting to get her jock boyfriend Rick (Marshall Harner) to be the Romeo to her Juliet in the school’s production, while Danny, another high schooler, (Mukul Seem) is actually casted for the part. The concept of a play within a play was comical to viewers, and the stage chemistry between Nicola and Rick captivated the audience. Mrs. Cavendish (Leah Stein), the high school drama teacher, exuded passion, and complimented the storyline perfectly. The struggle between a love interest and a passion was illustrated well, and allowed the viewers to connect to the characters. Overall, the storyline and characters were relatable and engaging, and continued the excellence of the one acts.

The Art of Critique, directed by Brandon Bland, showed how dynamic characters can completely transform a scene. Art (Charles Baggett), a passionate director, gives critiques to James (Lex Levin) and Stephanie (Thalia Eyles), two performers in his show. The production assistant (Laura Mendes) added a hilarious element during the most dramatic of scenes.  Early into the show, Art proved himself to be a character bursting with passion and excitement, and he truly engaged the audience, as they were on the edge of their seats, waiting to see what he would do next. The chemistry between the three characters captivated the viewers, as the dialogue flowed smoothly throughout the entire play. The play was humorous, inventive, and engaging.

Directed by Alex Mamalian, Bullies Anonymous tugged at the heartstrings of the viewers. The play centered around a bullying support group, containing all of the classic high school stereotypes: an outcast, Zed (Nicky Sremac-Saari), a cheerleader mean girl, Kimmy (Avery Harner), a jock, Kevin (Josh Jacobson), and an anonymous social media bully (Eleanor Raab). The group is led by a relatable, compassionate Guidance Counselor Jane (Kate Goldberg), who attempts to change these bullies’ harmful ways. The costuming in this play was particularly memorable, as the characters sat in a circle in rainbow order clothing, creating an uplifting and inclusive tone to the story. The characters shared relatable confessions and had the audience laughing throughout the entire play. In the end, the bullies unite and help a nerd (Journee Finney) find her way to math class, after she teaches them the importance of caring. The storyline captivated the audience and crafted a feel good story that stuck with the audience long after the play ended.

If You Die in Hamlet, You Die In Real Life, directed by Katie Brown, pulled out all of the stops to create an unforgettable performance. This play featured 14 different characters, and made radical social commentary in a comical adaptation of the Shakespeare classic. Hamlet (Katherine Gourianova), now an angsty teenager, captured the emotions of any teenager, and made a character communicating with his father to avenge him in a duel feel relatable to the audience. The play brought a modern spin to the beloved classic, including addressing the theory of a relationship between Hamlet and Horatio (Evyenia Zoulis). Horatio, the relatable best friend, added comments regarding the adaptation of the original the play and about the amount of subplots in Hamlet, which made the audience explode in laughter. Overall, this play was over the top in the best way possible and impressed the audience with its humor and charisma.

K, X, Y, and Z portrayed pharmaceutical workers naming a drug, and highlighted the interwoven relationships and interactions between all of the characters. Directed by Nora Holland, this play showed the true importance of dialogue within a play. Madeline (Nora Holland), Trent (Chris Gresh), Sheila (Ruby Howard), and James (Lex Levin) all display their connections over the course of the 15 minute performance, and the portrayals of their roles were masterful. Each character contributed something special to the plot, which made it exciting to watch. Madeline made radical commentary regarding the drug industry today, making the audience think while they were watching. The dynamic nature of this performance made it incredibly memorable.

Wrapping up the evening was Bloody Mary, directed by Lily Boehler. This play featured a woman, Mary (Maria Khakbaz), who was shot on the street. This attributes the name Bloody Mary, as she sat, bleeding on the street as people passed her, including a sarcastic old woman (Jonathan Ramer), who had the entire audience laughing at her every word. She is then rescued by an excitable yet nervous man named Joe (Atoosa Zarpak). Joe added character and personality to the show, and his timidness to have physical contact with others touched the hearts of the audience. The storyline caused the audience to really think about what society pays attention to, and how perhaps society should focus on helping others as opposed to themselves. This play wrapped up the evening perfectly, ending on a lighthearted note.

Overall, One Acts were a truly spectacular show, filled with thought-provoking commentary, laughs, and relatable characters.