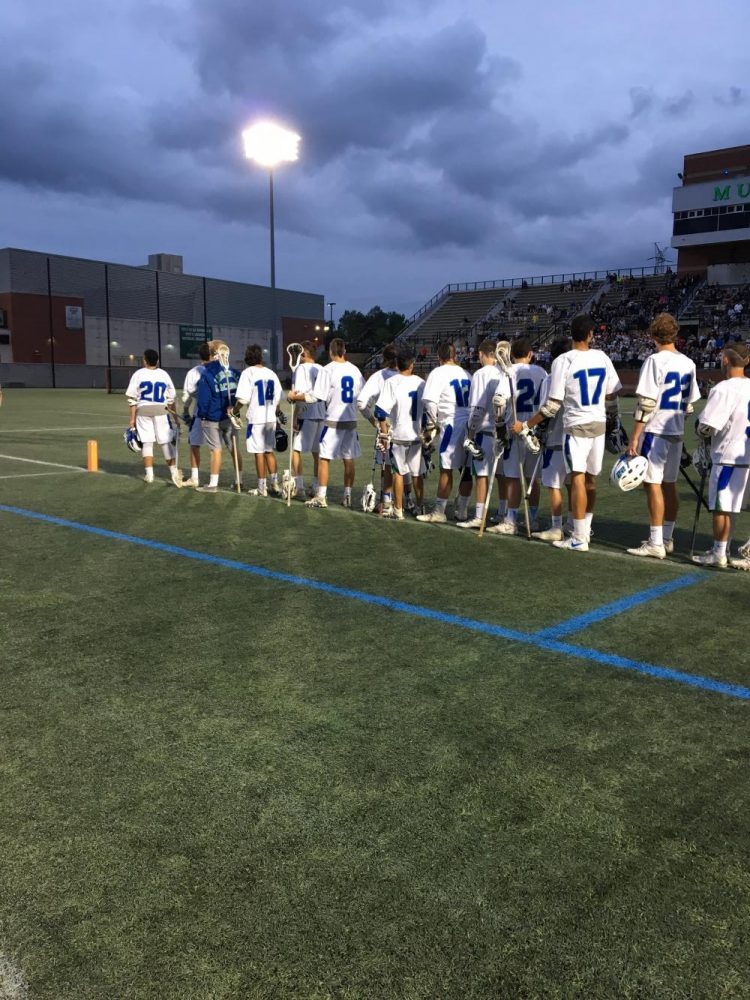 The CHS Lacrosse team stands for the national anthem ahead of the state championship game.

The CHS boys lacrosse team lost a heartbreaking state championship to Severna Park by a score of seven to six on May 24.

The bigger stage at Stevenson University led to an epic 4A/3A state title game. The team battled the defending champs through all 60 minutes, giving up Severna Park’s go-ahead-goal with only 3.1 seconds remaining. Despite the loss, head coach Jeff Fritz was happy with his team’s performance.

“I think we were the better team and statistically in that game we should’ve won,” Knife said. “The Severna Park team is loaded with talent and we did a pretty good job both defending and attacking it.”

Fellow Towson commit, junior Ryan Leonard, and Brown commits junior Reed Moshyedi and junior Jack Taylor each also had a goal in the game. These dominant players contributed to make this season one that was very impressive where losses were not common. To lose in a game like this one can hurt immensely.

“I try not to let losses get to me that much because of how much I hate losing,” Knife said. “I was immediately thinking of what I can do to improve.”

Senior goalie Alex Crombie, who made first team all-county, had nine saves on 16 shots. As the backbone for the team, the loss was tough for him.

“I was disappointed, of course,” Crombie said. “The final goal was a tough one to swallow. This was the first time I’ve seen this Churchill lacrosse team this emotional after a loss.”

Although the team lost another opportunity to go all the way, the team will more than likely have another shot next year. The team will only be losing four seniors, with talented players lined up to take their spots on the team.

“I do think we have gentlemen that will step up and not necessarily fill their shoes, but they will fill the void and contribute to help the team be even better and stronger next year,” Fritz said.

One player who has started contributing to the team and will continue to contribute is freshman faceoff man Merrick Willeford. Willeford won 13 of 15 faceoffs, an impressive feat, especially for a freshman. Another young player who started contributing recently is sophomore Ian Rosenthal, who took over junior Mac Ballman’s starting defensemen spot after Ballman was injured in a regional playoff game against Whitman.

“I had a decent game. There were definitely plays that looking back on I should have played differently and opportunities I was not able to complete,” Rosenthal said of his gameplay. “The team played well, but we just fell a little short at the end.”