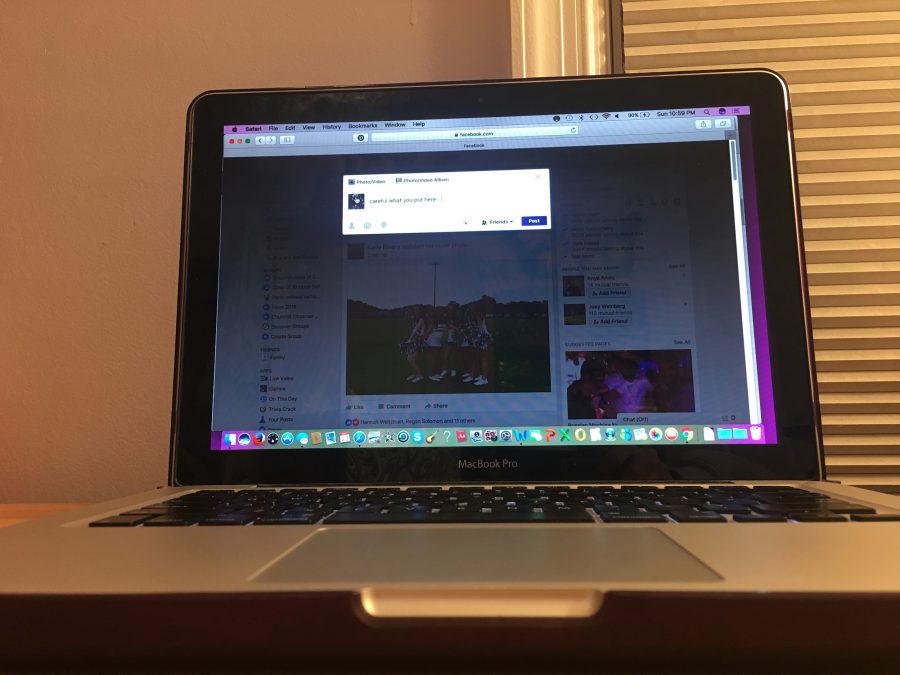 A computer with someone posting a new status on Facebook, and the status says that everything that goes on the internet stays there.

Photos of four Suffolk, VA high school students dressed up for spirit week have sparked controversy across the internet as the photos depict three police officers with a prisoner holding a “black lives matter” sign.

The photos were taken and posted Monday, October 17. Many took offense to the reference to the Black Lives Matter movement, creating the widespread controversy and causing the school to launch an investigation. The four girls have since deleted the pictures from their social media pages, but once something is on the internet, it stays there. Often times when people, especially teenagers post references to controversial topics on the internet, there is disconnect between what is intended and what is interpreted. Regardless of whether the girls’ intentions were offensive or not, it was still ignorant of them to post online for a variety of reasons.

Just like the old saying in Vegas, what happens on the internet, stays on the internet. Except, while Las Vegas is only a city, the internet is its own dangerous virtual sphere of existence that exists anywhere and everywhere in the world. Anything posted online can be accessed by anyone in some way. Nothing is actually truly “deleted”. All mistakes made on the internet cannot be left behind and forgotten; they only follow behind and wait in the shadows of a person’s life. These pictures will tag onto the girls’ lives forever even though they have been deleted off their personal pages, and thus their affiliation with the political movement will as well.

Political views are an individual’s personal right, as well as something that can change over time. By posting such photos on the internet, these girls establish their stance on a controversial topic, and even if their stance on this topic evolves over time, they will forever be associated with the views established in the photo. When applying for jobs, employers often search the applicants on the internet for such mistakes and will deny employment to an individual who ever posted or was tagged in anything they deem inappropriate or that they may disagree with.

This concept applies to almost any situation involving social media, especially for teenagers. For example, often times people post pictures holding red solo cups. Red solo cups are commonly associated with consuming alcohol, which is illegal for anyone under the age of 21 in the U.S. The association causes viewers to automatically assume that any red solo cup will contain alcohol in photos. This has the potential to hurt underage individuals because viewers, for example, school administrators or college admissions or employers can find the photos and penalize or deny the applicant a position due to an assumption based off a common association.

In addition, as in art and writing, photos and their captions posted to social media are automatically susceptible to any interpretation. There is no person explicitly defining the message which the poster specifically intends to convey to each viewer. Hence, a picture of three police officers behind their prisoner holding a sign that reads “Black Lives Matter” can easily be perceived in several different ways: making a joke of the topic; showing support for the cause; mocking the issue in opposition; or even a negligent, poorly thought out costume idea.

According to a letter sent from Nansemond River High School’s administration to parents, the girls intended to raise awareness of the “Black Lives Matter” movement and to show their support for the movement, and they regret that the negative interpretations of the photos.

Although the students claim to have posted to raise support for the matter, it is unclear to viewers that this was their intent. This disconnect allows for such contrasting perceptions and inferences of the post’s message. In addition, since the internet is so vast and virtual, people all across the country and world have access to the photos and objectively interpret the photos in their own way.

The school was inclined to take action because the photos were taken at what appeared to be the school. Although, had the background of these photos been off-school property, there would have been no investigation and the four girls would have been forced to deal with the controversy on their own. Any act on or tied to the school and its property falls directly under that school and county’s jurisdiction. The girls have the freedom to post whatever they want to on the internet, regardless of its message and interpretations, though it was inappropriate to do so at school because they are subject to the school’s authority and rules. In this case, because the school found that the girls’ had pure intent with the post, they were lucky to not have consequences. If the investigation concluded that the students purposely tried to offend the African American movement, then the students could have faced punishments that could potentially negatively affect their futures.

For example, there are several cases in which students were suspended for offensive comments. These suspensions stay on the student’s personal record and could affect whether or not they are accepted into college. An internet post almost intensifies this effect because, not only does a college have access to the student’s record, but they also have access to the actual post as it is permanent.
Usually, it is better to be safe than sorry. Everything on the internet is permanent and can easily haunt and hurt an individual’s future. Just because something is implied, that does not mean it is inferred, so one should always carefully consider all the possible consequences when posting online.