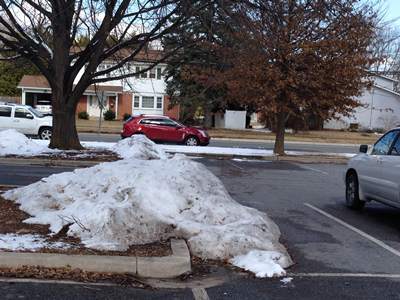 After a relaxing five-day weekend, many students and staff returned to CHS last Tuesday to the surprise of significant amounts of un-plowed snow and ice in the parking lots.

This un-plowed snow and ice even prevented some students and staff members from using their regular parking spaces.

“All last week, I was unable to park in my space,” senior Hayley Mulhern said.

This event has led many to ask: whose responsibility is it to clear the parking lots in the event of inclement weather?

According to Principal Joan Benz, it is MCPS’s responsibility to clear all school parking lots and bus loops in the event of snow or ice.

“They come with their big plow trucks and do the big parking areas here,” Benz said.

However, Benz continued to explain that everything must be cleared before students and teachers are approved to return to school, in order to prevent any potential injuries.

According to Director of Maintenance for MCPS, Lynne Zarate, sometimes, there is simply no solution to un-plowed snow and ice.

“Sometimes when there is a large quantity of snow in a short period of time, there is not a lot of room for the snow to be pushed aside, and a couple of spaces are blocked with snow,” Zarate said.  “We do our best to minimize the impact.”

According to Zarate, however, there are additional steps that can be taken in certain cases.

“If there is an operational impact from a snow pile, the school’s building services manager would contact the supporting maintenance depot, and we would send out additional heavy equipment (for example, a backhoe and dump truck) to move more of the snow,” Zarate said.

Despite all of the inconveniences caused by leftover snow and ice, it has yet to interfere with school day operations at CHS. This means there may not be anything the county can do to further clear the lots for the time being.