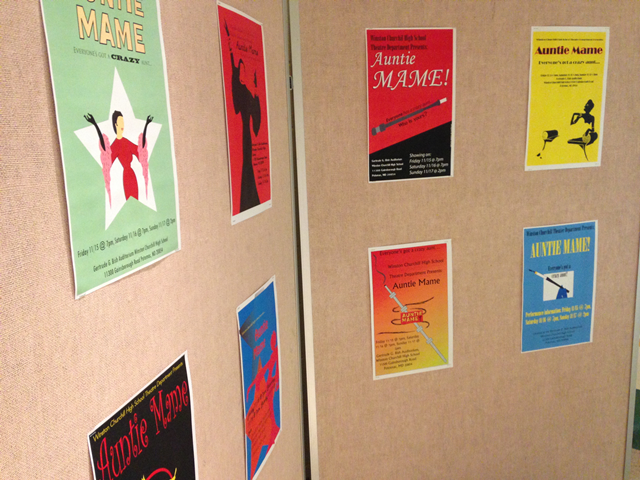 Hold onto your flapper dresses and pearls because the CHS Drama Department will be taking us back to the 1920’s with its production of Auntie Mame this weekend.

The show will be playing in the Bish Auditorium on Friday and Saturday at 7 pm and on Sunday at 2 pm.  Tickets will be available at the door for $10.

Auntie Mame takes place during the great depression and tells the story of an orphan named Patrick Dennis who falls under the care of his father’s sister, Mame Dennis.  The play captures their journey through Patrick’s childhood as he becomes more and more accustomed to Mame’s eccentric and free-spirited lifestyle.

“There isn’t a scene in Auntie Mame that isn’t exciting and full of action,” cast member junior Emma Tower said.  “The show is incredibly moving and there is never a dull moment.”

The rehearsal process for the show was quite demanding.  Students prepared for the performances by rehearsing for two to three hours each day over a period of six weeks.

According to Tower, who will take on the role of Sally Cato MacDougal, preparing for the show was a “daunting task,” but the numerous rehearsals helped the small cast of about 20 “get really close really fast.”

Along with director Scott Courlander, many students in the Drama Department stepped up to take leadership roles for Auntie Mame.  Seniors Hope Kean and Jimmy Schwartzman and junior Jackie Spang all worked together to bring the production to fruition by leading meetings and private rehearsals.

This past week the cast and crew of Auntie Mame participated in a “tech week” where they rehearsed for about four hours each day.  This allowed them to add finishing touches to the show so that everything was set for opening night.

“I always enjoy tech week the best because finally the show comes together and we get to see the final pieces of the puzzle,” Tower said.  “I think tech week would definitely be my favorite part of the experience of this show.”

The cast and crew are looking forward to sharing their hard work and dedication with the CHS community.  They encourage everyone to check out Auntie Mame this weekend.

“I couldn’t have asked for a better show to be a part of,” Tower said.  “Of course it had its ups and downs, but the overall experience has been great.”