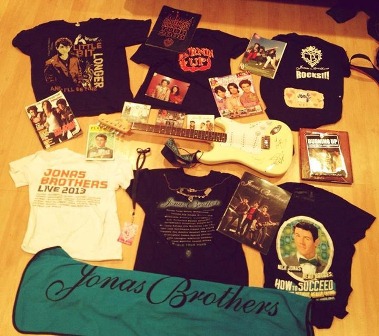 We grew up with them. We fell in love with them. We fangirled over them. We watched their TV show. We supported solo careers. We’ve been there for them through thick and thin. But now, the Jonas Brothers have officially ended their family trio music career.

The brothers, Nick, 21, Joe, 25, and Kevin, 25, formed their band in 2005, instantly attracting thousands of fans with their first single, Year 3000. They toured on and off, releasing albums along the way. Four years after their musical premiere, they debuted a Disney Channel series, Jonas, and their fame was unstoppable. They were just about the biggest boyband in the world.

“I’ve been a fan for about eight years,” junior Gavi Kaufmann said. “I love them so much.”

Early this month, the Jo Bros abruptly announced the cancelation of their fall tour, devastating fans all around the world.

“I was planning on seeing them on Oct. 21 at the Fillmore,” Kaufmann said. “Not only did I have great tickets, but I had meet and greets. When I heard about the cancelation, I was in tears and so upset that I couldn’t even study for the homework I had.”

After so many years of touring and releasing music, bands’ careers often begin to fizzle out.

According to People Magazine, Nick confessed that he had “serious concerns about the future of the band.”

Rumors are flying, but fans are trying to “hold on” through all of the changes the brothers are making.

“I’ve heard from radio stations that Joe is in rehab and that they are becoming distant because of Kevin and his show along with his wife’s pregnancy,” Kaufmann said. “I think they might have a comeback one day.”