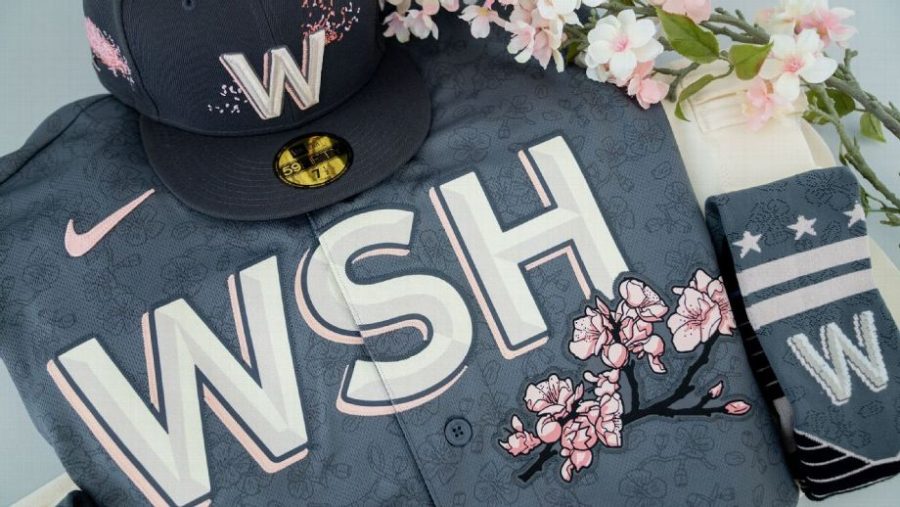 The Nationals jerseys are part of the MLBs City Connect Uniform Program. Starting in 2021, the program was an attempt from Major League baseball to create uniforms that celebrated the bond between cities and their baseball clubs. Drawing inspiration from the city’s culture, values, community and history. These new uniforms were a venture by the MLB to celebrate baseball tradition and invite more fans to the game of baseball.

The Wizards new jerseys will debut during the 2022-2023 season. However, for many fans this has been a long time coming. Ever since 2017 when Nike first began its partnership with the NBA to produce jerseys for game use, the City Edition uniform concept, which served as an inspiration for the MLB’s City Connect Uniform Program, was designed to closer connect a franchise to the city and its fans. Ever since that day, there has been a slew of rumors, concept art, fan requests, and edits for the creation of cherry blossoms-themed jerseys for the Wizards to sport.

When the day finally came and the jerseys were announced, fans were ecstatic. The excitement could even be seen in the halls of Churchill as students could be seen at every turn discussing the new jerseys and showing pictures to their friends. Yet while many were excited about the jerseys, very few understand the history of cherry blossoms and the DC area and the fact that it goes back over 100 years.

The first blossoming cherry trees were imported from Japan in the year 1906 as an experiment by the U.S. Department of Agriculture. After the long journey, 75 of the trees were planted on a hillside property in Chevy Chase, Maryland. One year later, after the trees successfully grew, the experiment was considered successful.

Three years later in 1909, Tokyo’s mayor sent a gift of 2,000 trees to Helen Herron Taft, who was the first lady at the time. However, when the trees arrived a year later in 1910 it was discovered that the trees were infested with insects so President William Taft ordered the trees to be burned.

Nevertheless, two years later another shipment of over 3,000 trees arrived and over the next five years, the trees that have become iconic would be planted along the banks of the Tidal Basin and around the Whitehouse grounds. It is these 3,020 trees that would go on to become one of the major staples of springtime in the DC area.

While cherry blossom trees have become mainstays, it looks like the jerseys they inspired will be just as popular. Before they were even seen on the field the Nationals’ cherry blossom smashed the previous record for MLB jersey sales. By this measure and judging from fan’s reactions, expect something similar to occur when the Wizards release their new jerseys for sale. Do not be surprised when you see a multitude of students wearing these pink accented jerseys to school when the fall rolls around.