Students elect to stay “in” during meaningful walk out 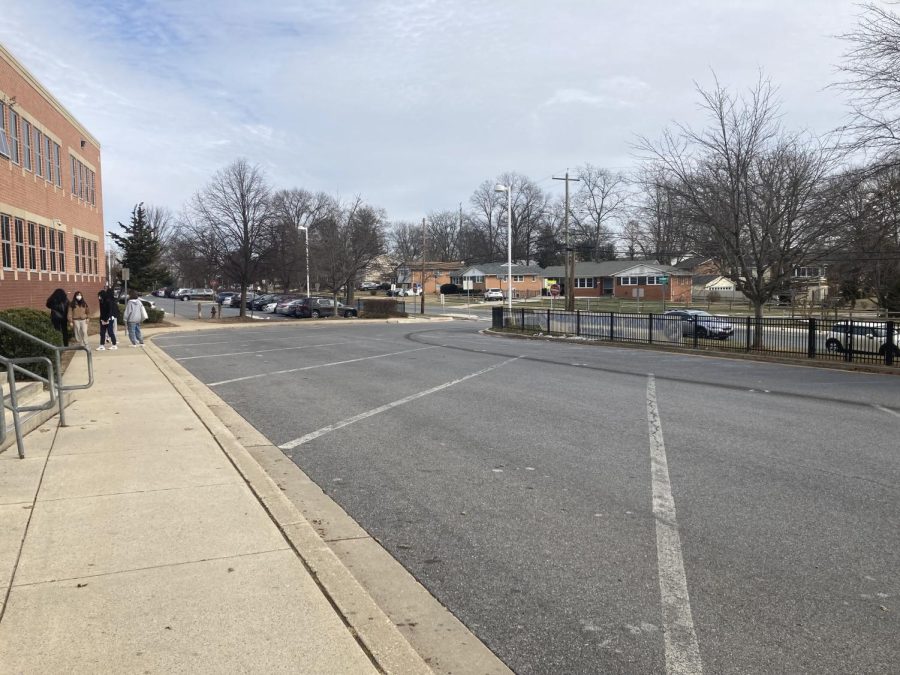 During sixth period on Jan. 21, students walk out in the bus loop of WCHS, to call for more transparency from MCPS on COVID-19. This was part of a countywide initative.

The turnout, however, was not what WCHS organizers expected due in part to a decline in coronavirus cases across the county, MCPS policy changes, sub-freezing temperatures of around 20℉ and the fact that it was planned on the final day of the semester when many students had last-minute assignments or wanted to say goodbye to classmates. Yet, those who protested felt like their voices were heard when they walked out in the bus loop.

“We’re walking out for hopefully a few more accommodations from MCPS. I know that they’re releasing a virtual option for next semester,” the sophomore organizer — who wished to remain anonymous — said. “But [our main reason for walking out is for] mostly more transparency because all of the information we’ve gotten about COVID over the last couple of months has been really unclear and I think that’s really dangerous in a situation like this, because if you don’t know what’s happening, it’s going to be harder to protect yourself.”

When The Observer got to the scene around 12:20 p.m., five students were protesting, including those who organized it. Two security officers, monitoring the walkout from the Bulldog Lobby, said that they noticed five or six people come in from the walkout before The Observer got there. Additionally, some students had gathered in the Bulldog Lobby, questioning if they should go out before ultimately deciding not to.

“There was a lot more interest when I was going around looking through Instagram and trying to promote,” the organizer said. “I think probably the temperature, the last day of the semester and maybe even the snow day yesterday really affected the turnout we had today.”

They also acknowledged that MCPS’ changes, which meet some of the organizer’s demands, may have limited turnout as well. The organizer said they worked with other students from schools across the county who were organizing their own walkouts. The MCPS Students for Virtual group has been promoting the walkout for MCPS students during January and received large turnouts at Walter Johnson High School, Northwest High School, John F. Kennedy High School and Tilden Middle School.

“I’m definitely very proud [of] taking a stand and also proud of my student body. Obviously, not everyone can make it, especially on the last day of the semester, but every voice counts,” WCHS junior Olivia Frank, who walked out, said. “I thought that obviously, with all the other schools, I think that’s important for transparency, which started well, with color-coding the schools [based on the percentage of COVID-19 cases reported] and then all of a sudden stopping.”

The organizer also reached out to Principal John Taylor before the walkout to let him know they wanted to participate in the countrywide initiative. Together, they selected a mutually agreed upon time and location, to ensure students’ safety without limiting their First Amendment rights. MCPS guidance said each principal was able to determine if it was an excused absence or unexcused; Taylor decided to consider the walkout an excused absence to allow students to participate without repercussions in school.

“I think it’s important for people to express their ideas,” Taylor said. “There are policies in place that allow [students in MCPS] to protest and to make demands or to [take] different directions like that. I appreciated that they had contacted me and we agreed on how…they wanted it to go. I could understand their point of view of wanting to have something more clear and wanting to have something more done.”

There has also been an update on WCHS’ COVID-19 status. From Jan. 12 to Jan. 21, an average of six cases were reported at WCHS. Additionally, the school is seeing an average of four to seven percent of students being absent each day for various reasons, nearing the average from before the spike in cases last month.

The positivity rate is also nearing the average in December 2021, which was in the low single digits. As the second semester gets underway, Taylor hopes the absence rate and the number of students who test positive will continue decreasing.

“I’m hoping we’ll be back kind of as we started [at the start of the] second semester,” Taylor said. “And I think for most kids, they’ll start feeling a lot more comfortable being back in the building.”