Boxlights ring in 2022 with unknown potential 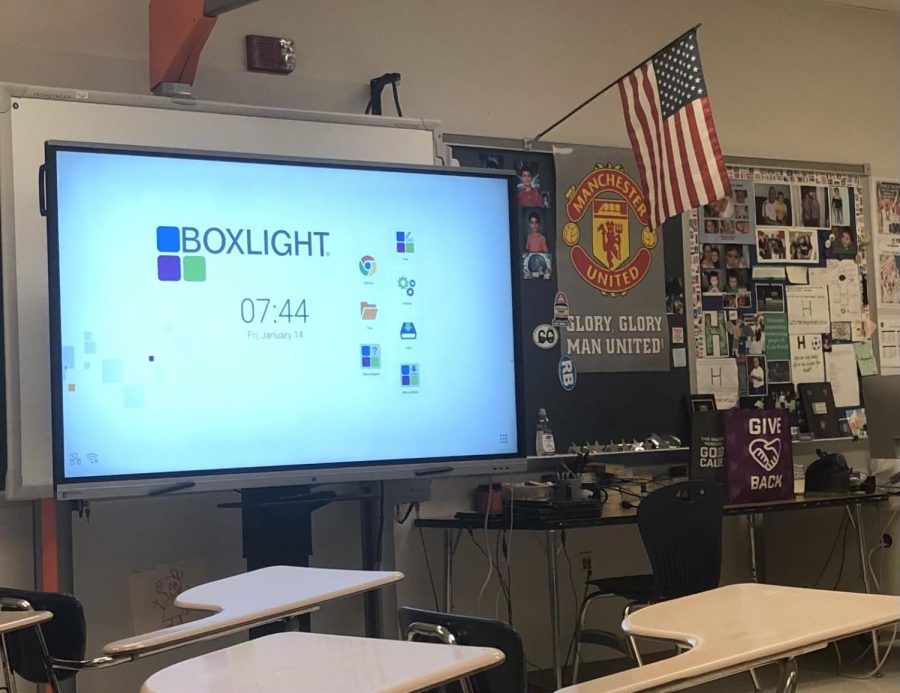 Boxlight boards have been placed a large number of classrooms like this one. Here one is powering up as Mr. Hakopian begins class.

As students get back into the hustle and bustle of school after winter break and the multitude of snow days, there are more changes than meets the eye. Surrounded in controversy around in-person school, MCPS seems to be doubling down on something a bit different: in-person classroom technology.

As students walked back into their first-period classes at the beginning of January, many noticed something different about the staple of most classrooms: the Promethean Board was being obscured by a separate board. Sitting directly in front of the old board, the new piece of technology is called a Boxlight. As with most new additions to the classroom, the discussion has been mixed.

“We had no training or tutorials with the boxlights,” Hakopian said. “They appeared in our rooms with some basic instructions and we were on our own to figure things out. The timing made sense, but it was still a surprising transition out of winter break.”

The minimal training offered to teachers made for interesting classes during the first few days back from winter break as teachers struggled to learn the ins and outs of the new boards. Eventually, teachers caught on and began exploring all that Boxlights offer in the classroom.

“The Boxlights are significantly more user-friendly and allow a better way to interact with our desktop,” Hakopian said. “They also allow for freezing the screen and annotating directly on the screen. Promethean boards did this as well but [the process] was much more complicated.”

Boxlights are becoming the new go-to classroom device, with numerous benefits compared to outdated projector-based Promethean boards. One obvious improvement is the screen, which resembles a TV that emits light, rather than a white surface that gets projected upon.

“The biggest difference is clarity in the screen,” WCHS IT Systems Specialist Shawn McWilliams said. “Apart from that, their functions are more or less identical, with the Boxlight being an upgrade in nearly every aspect.”

Another major benefit to the Boxlights is their versatility in the classroom. Because the boards are on wheels, they are easy to maneuver around the room to use for many different purposes. At the same time, this can make them appear like a quick fix to broken boards, which remain mounted on the walls.

Change can be difficult, especially during a time filled with so much uncertainty, but it’s definitely a positive to hear that the county is investing in new technology. However you look at it, it seems like the Boxlight is here to stay.

“In the long run, I am sure I will prefer the Boxlights,” Hakopian said. “I probably don’t know half of what they are capable of doing.”