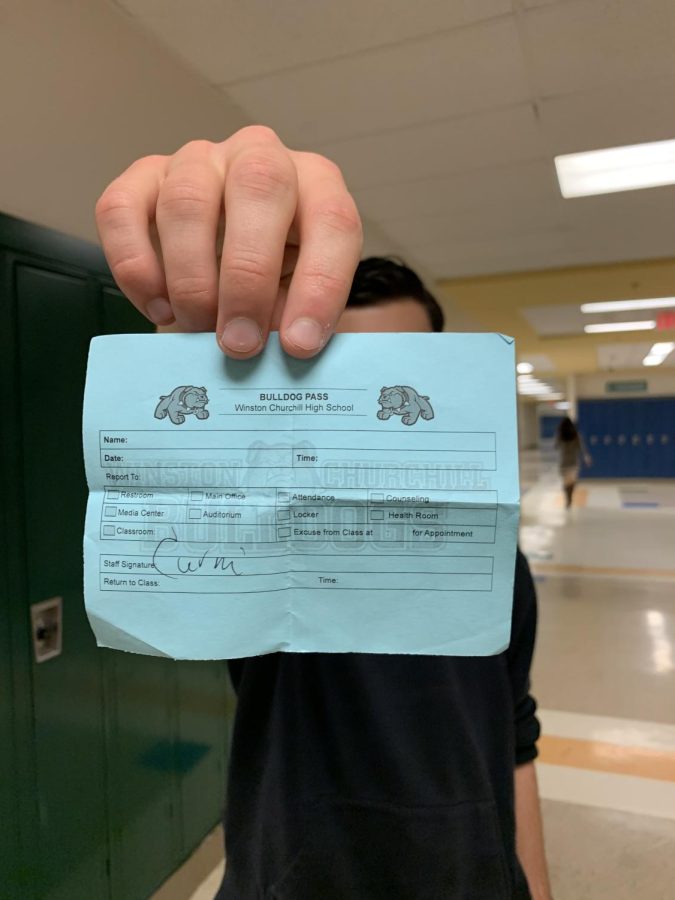 All students must carry blue passes in the halls as a requirement of the new hall pass system under 2021 administration.

For a long time at WCHS, it was virtually impossible to see empty hallways, whether students or staff were occupying them. Now, administrators have implemented a new technique to limit the spread of COVID-19, and the number of students in the hallways during class: blue hall passes.

Usually, there are two specific hall pass items designated to each classroom, whether that be a lanyard or laminated pass with the room number on it. The blue passes were created to ensure that students can not reuse passes to wander the halls during class.

“Teachers are provided with a stack of disposable paper passes, printed with a template to be completed each time a student needs to leave the classroom during a class period. The student needs to carry the pass with them to and from their destination,” physics and chemistry teacher, Jonathan Lee said. “These passes are general-purpose, so that they’re for students going to the restroom, media center, nurse, main office, and/or excused tardy between classes.”

The larger question at hand is whether or not this new implementation is effective at solving the problem at hand.

“I don’t know how many students are in the hallways during class on average because I only go out when necessary,” senior Kayla Song said. “When I do need to go somewhere during class, I can estimate that I see about four people, not too many.”

The disposable passes limit hand-to-hand contact compared to multiple students sharing a single laminated pass throughout the day, but there is no telling if it keeps students out of the hallway during class.

“I would argue that [blue passes] exacerbates that problem since students can simply not throw their pass away when they return to class. With an already strained security staff, there simply are not enough resources to squander with having security guards constantly checking students’ passes,” Lee said. “Let’s be frank, students who skip class do so without a pass anyways.”

While there are many positives about the new passes, there are some drawbacks. An issue that has arisen in multiple classrooms are interruptions to instruction as a result of teachers having to sign and fill out passes for each individual student.

“I think that asking your teacher to fill out a blue pass to go to the bathroom is time consuming and inefficient,” Song said. “There are times when my teachers have paused a lesson multiple times in one class period to do so.”

Ultimately, it is not hard to believe or assume that students find their way around rules or restrictions.

“I don’t think [blue passes] are a solution at all; rather, we should just revert back to reusable hall passes or simply have a student sign-out system like in prior years,” Lee said.