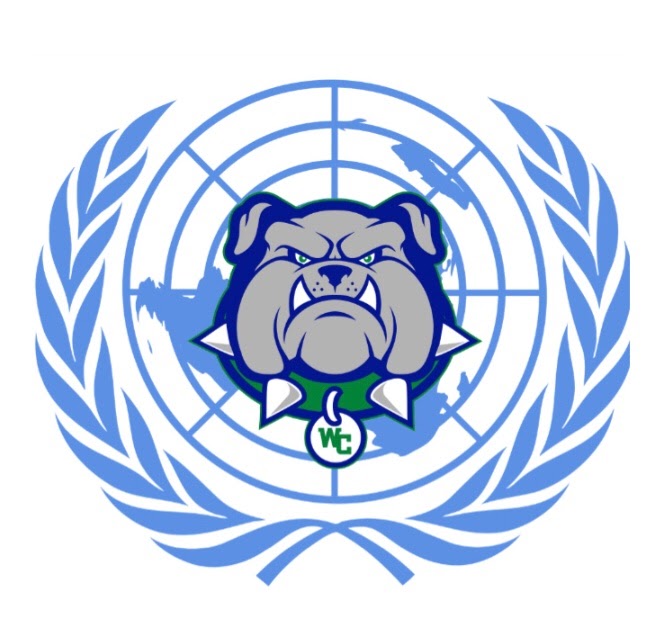 WCHS's Model UN team is hosting their first ever conference in April. Students and teachers work together to make this event a reality.

Virtual school has not only changed the way that students learn, but also how they do their extracurricular activities. Participation is waning for many WCHS clubs, due to the lack of incentives, such as food, that would bring in many students during in person school. Some clubs even have conflicting meetings, with many being held on Friday mornings to make the most of the free period.

However, on Mondays at 3 p.m., 45 students hop on Zoom to debate world issues, work on their public speaking and prepare for conferences that imitate the United Nations. WCHS’s Model UN club has begun to make a name for themselves as a skilled and hardworking team, and it shows with their accomplishments in recent conferences.

“This might be the most dedicated group of students I have worked with in my teaching career,” WCHS US History teacher Sandy Young said. “We meet every Monday and the officers have presentations, plans and strategies to share with new and returning members. Their work ethic is inspiring.”

Meetings can range from speaking practices to paper reviewing, but all are working towards the main goal of preparing members for future MUN conferences. Although they are usually held in person, conferences are now being held over Zoom, and they still allow students to work together to solve problems that currently stump world leaders.

“I think my favorite part of being in Model UN is the conference experience as a whole. From the very first bit of research, to opening speeches, to resolution writing and awards, the whole experience is a truly incredible and unforgettable one,” WCHS sophomore Roman Messali said. “For one weekend, you really feel a sense of escapism as you’re completely integrated into the committee and feel like an actual delegation. The people you meet, the speeches you give and the solutions you come up with; they’re all unforgettable.”

WCHS has dominated in recent conferences. Eight WCHS students were awarded in DELMUN, a Delaware conference held recently over Zoom, with four students getting “Best Delegate” which is first place in their prospective committees. WCHS also did well in NAIMUN, a nationwide conference, with five students receiving rewards for their work.

“NAIMUN is the most competitive high school Model UN conference in North America. We have consistently earned five awards for the past three years, which is very impressive. These awards range from verbal commendations (4th place) to outstanding delegate (2nd place),” WCHS senior Phoebe Chambers said. “The virtual format has allowed us to compete in conferences not on the DMV circuit as well, like DELMUN. We did very well, earning several best delegate gavels (1st place) with a variety of other awards as well.”

The WCHS MUN team has begun to branch out past only participating in conferences – they will be hosting their first-ever conference on April 16 and 17 this year. With six different committees being offered at this conference, immense planning and collaboration has gone into the making of this event.

“I knew that I wanted to host a conference at my high school towards the end of my sophomore year when I heard Wootton’s Model UN team hosted one. If they could do it, why couldn’t we?” Chambers said. “It’s a lot of work. I probably do something related to the conference every day.”

Over 24 students are involved with helping create background guides- essential information about the specific topic- as well as being a part of running the actual event in April. Chambers is the Secretary General of the club, meaning that she is in charge of overseeing all aspects of the events – from designing committees to training chairs. Other members, like Messali and WCHS freshman Henry Dirckx, work on specific committees in the conference.

“I am co-chair of the DISEC committee, so I helped write the background guide and will help evaluate background guides, speeches, unmoderated caucuses and help choose awards along with the chair,” Dirckx said. “I am excited to staff a conference, especially as it is WCHS MUN’s first.”

There are still some bumps along the way, with the MUN team desperately needing teacher chaperones to help manage the conference. So far, WCHS teachers such as Mrs. Brown and Mr. Imperial have volunteered, but many more need to join after them to ensure the success of the conference.

“Honestly, the hardest thing has been to try and find chaperones for the conference. We need teachers to run the various Zoom committees, but everyone is so busy right now,” Young said. “I hope that we can recruit more teachers to help us out because I think it’s going to be great!”

The hard work put into this event is sure to pay off, and many hope that this becomes an annual tradition. The WCHS MUN team’s future looks bright, and members hope to keep up the progress that was made this year.

“Overall, I’m incredibly excited about this conference. This will be Churchill’s first time hosting a conference, and I believe it has an incredible amount of potential… I think it is truly fascinating to see how people present themselves, react and improvise in dynamic, high-stakes situations,” Messali said. “I am truly looking forward to seeing how delegates from all over the world use their skills and talent to further their own interests as a delegate.”

If you are interested in checking out the work of the WCHS MUN team go to this website: https://sites.google.com/view/wchsmodelun/home?authuser=2