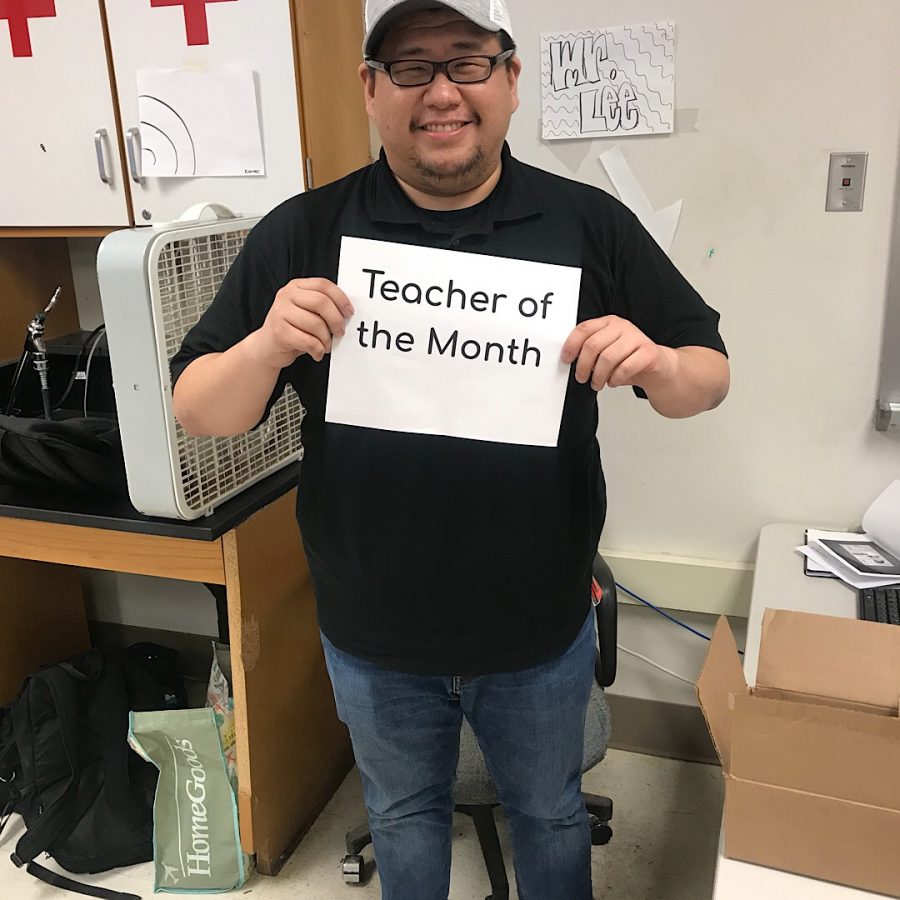 Jonathan Lee is June's Teacher of the Month.

Although Honors Chemistry is known to be a very difficult course, Mr. Jonathan Lee has made learning effective yet enjoyable for his students. Lee has taught at WCHS for five years. Students every year boast about his impressive teaching style and his unmatched relatability.

Before working as a teacher, Lee graduated from Quince Orchard High School, and continued his education at University of Maryland on a full academic scholarship, despite also being accepted into the Massachusetts Institute of Technology. However, he soon realized that college was not for him and instead joined the United States Army.

“I served between 2008 – 2010 as a member of the Army’s 1st Battalion 75th Ranger Regiment, eventually completing two 12-month tours in Afghanistan and Iraq before a combat injury in 2010 resulted in my medical discharge,” said Lee.

“Mr. Lee is a great teacher, and really elaborates on everything so I understand each topic completely.” said WCHS sophomore, Isabella Caraballo.

This college experience was a much better fit for Lee, as he discovered his love for teaching.

Before working at WCHS, Lee worked at Catonsville High School in Baltimore County. He explained that there he worked as a chemistry teacher, but did more erratic experiments than at WCHS.

“One time, the Bunsen burner was a tad too close to the big container of methane bubbles so that when I ignited the bubbles in my hand, a trail of fire followed the residual methane near the container, into the container, and then exploding the container,” said Lee. “ Luckily, glass did not shatter all over the place, but the explosion did burn off my eyebrows.”

Lee’s favorite part of teaching is seeing his students succeed. He loves it when his efforts in teaching finally pay off on tests, quizzes, and in class discussions.

“I also love to see when a student has one of those “lightbulb” moments, when they’ve been trying and trying to grasp a difficult concept and then suddenly they get it. You can see it in their eyes, like, “Ooooh, I get it now…!”” said Lee.

He naturally is social, making it easy for him to connect with his students. He also has a casual sense of humor that he often will incorporate in his lessons to grab students’ attention and make them laugh.

“He encourages me to excel in class and I can truly tell that he wants what is best for me.” said Isabella Polglase, a WCHS sophomore.

Lee makes efforts each day to not be a different person to his students than to his peers. Treating his students well, with respect is another crucial trait Lee has.

“My hope is that my positive outlook and attitude translates well to my students,” said Lee. “Furthermore, I feel very strongly about not being a different person at school than I am “in real life.” I try to be as “real” to my students as I would to anyone else.”

When Lee was in the Marine Corp, the MARSOC (Marine Special Operations Command)  continued to explain each day that “Today will be different.” It means that no matter how badly yesterday may have been, it’s up to you to break out of the negative cycle and to take ownership of making today different.

“Not only is Mr. Lee a fantastic chemistry teacher, but his bright personality lifts me up each morning during first period.” said Polglase.