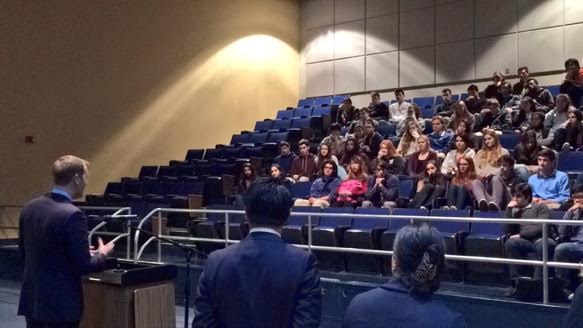 photo courtesy of the UK Embassy used with permission

Members of the U.K. Parliament met with 93 A.P Comparative Government students to discuss their political experience, how their government system works and the relationship between the U.S and the U.K.

According to A.P Comparative Government teacher Jamie Kimbrough-Groves, her class profiled six countries and how their governments work, and the UK was the first country that they studied.

The four Members of Parliament present were Naz Shah and Holly Lynch of the Labour Party, as well as Alan Mak and James Berry of the Conservative party.

Although the primary reason for the visit was to discuss how the relationship between the U.S and the U.K effects young people, the topics discussed varied from Donald Trump and American politics, to global issues that are often overlooked.

“[The students] did a really great job asking questions based on their knowledge inside and outside the classroom,” Mrs. Kimbrough Groves said. “They seemed to really enjoy it.”