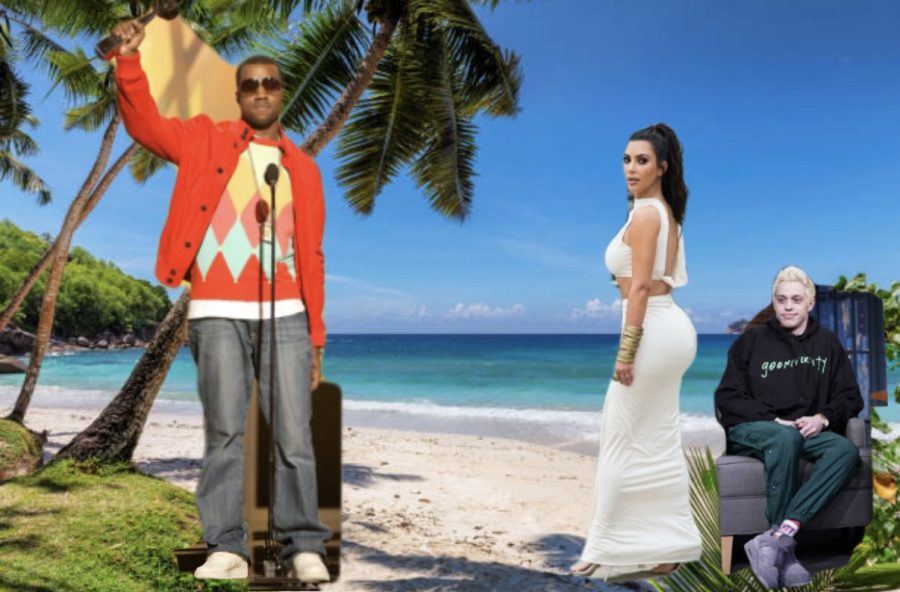 After looking back on Kanye West, Kim Kardashian realized it was a travesty that she ever left him in the first place and hopped straight from Pete Davidson back onto her baby daddy Kanye.

After months of animosity and an extremely messy divorce, America’s favorite couple is finally back together. Kanye West and Kim Kardashian have announced, via “The Tonight Show starring Jimmy Fallon,” that they have decided to get back together. The divorce papers have been set ablaze, as seen in an Instagram post by Kanye, and new vows have been made but surprisingly have not surfaced online yet.

After a stint with a couple of different girlfriends, Julia Rose and Chaney Jones, Kanye has found his way back to his beloved Kardashian baby momma. Kim ultimately broke up with Pete Davidson after she had an epiphany one morning and realized Pete was not a 22-time Grammy winning-artist.

“I’m not sure what got into me really. Maybe I was just drawn in by his [Pete Davidson’s] jokes but once I realized I was not married to the man behind the greatest album of all time, “Graduation,” I quickly got my life back together and took back my beloved husband,” Kim said.

The four children they have together, North, Saint, Chicago and Psalm, could not be happier about their parents’ reunion. Although two Christmases a year was pretty awesome, they are excited to finally be able to attend Sunday Service with their father again.

The couple announced that they would officially be remarried on April 1, 2022 in Honolulu, Hawaii, the same place where Kanye crafted his iconic award-winning album “My Beautiful Dark Twisted Fantasy.”

“Going back to a place like this is special, not just for me but for my family. Honolulu is a place of extraordinary beauty and is where I feel like I can be the best version of myself,” Kanye said. “Having Kim and my entire family back feels like it was a gift from God. I can finally go back to truly enjoying life and watching my kids grow up every step of the way.”

The news ultimately caught not only the WCHS community but the entire nation by surprise. In fact, President Joe Biden declared April 1 a national holiday, “West Day,” to celebrate the great accomplishment of Mr. West and his family. Kanye additionally teased via Twitter that he would be releasing “Donda 2” on that same day, making Kanye fans rejoice at the long-awaited release.

“Words truly can’t describe how happy I am at this moment. I cried for over four hours after hearing the news that KimYe is back together. Life is finally back to normal,” WCHS junior Brendan Carnathan said. “My birthday wish finally came true, and now I will be able to celebrate a new day of birth annually, on April 1, for West Day when the world fixed itself back together.”