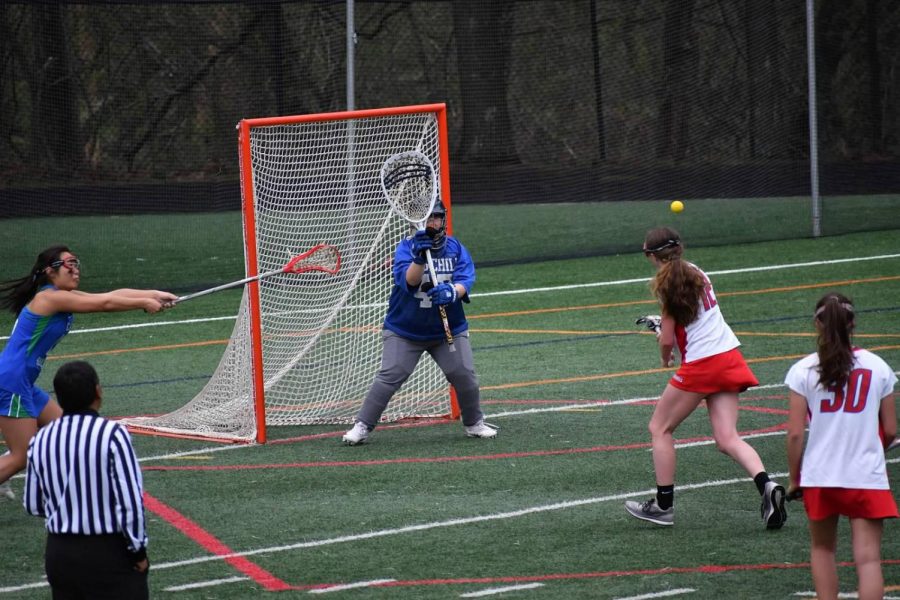 Many students begin on JV teams and move up to varsity teams as their skills improve.

Most WCHS students grow up playing with their siblings, from biking together to playing random sports, but sometimes those sports can become an even bigger part of  their future.

For junior Cammy Buckingham, she started off as a goalie for the sake of her older family members to practice their offensive shots and grew accustomed to the fast environment of a lacrosse game. Buckingham had eventually grew in league with her family, but little did she know that this familial pastime would have her grow to master the skills necessary to become one of WCHS’s varsity girls lacrosse goalies. Before this, however, she had been on JV for two consecutive years.

“Before making it onto varsity, from my first year to my second year on JV, the biggest difference was in playing time because it was going from 10-15 minutes per game to full halves, sometimes even full games.”

Before she became the varsity goalie she is today, as all athletes, Buckingham had began with countless bruises and frustrations directed at her own performance. Moving into high school, Buckingham had decidedly joined the lacrosse team in her freshman year, making it onto the JV team. As Buckingham had initially started her WCHS lacrosse career on JV, she refers to what exactly she learned on JV and how she applies her lessons from JV to varsity.

“I think on JV, I improved on my skills in preparation for Varsity and really just how to be a good teammate,” Buckingham said. “Being on this team was a lot of fun because it had a sense of family, while it was at the same time an environment centered around growth, learning and teamwork.”

Buckingham had been a JV Girls Lacrosse goalie for both her freshman and sophomore year, both being her years of growth in lacrosse. Acknowledging what exactly Buckingham learned on her time on JV, she also references the determination one must have in order to commit themselves to lacrosse as a sport and as a member of the JV team.

“Anyone who really wants to make JV their first year trying out needs to get involved in offseason work, like going to workouts and playing fall ball and winter league, just getting involved,” Buckingham said. “And of course, to practice and grow as much as possible.”

With having enjoyed her time on the JV team because of the values and lacrosse skills she had learned, she notes the true difference between being on the JV and varsity team of the beloved sport.

“Moving up to Varsity this year, although we’ve just begun, you can tell the team environment on this team is very important; there’s very good chemistry on and off the field,” Buckingham said. “At first, I was really scared, but everyone was very welcoming and super nice. As for changes in the transition, there definitely is a stress to perform higher because you want to succeed and be good for the other players on the team. This year, we have a super talented team and they challenge you to get on your level.”

Buckingham knows that the chemistry may easily be one of the most important aspects of being on a team, and the relationships she had with her past JV teammates seem to be similar to that with her varsity members.

“I don’t think there’s a difference in my relationship with my teammates from JV,” Buckingham said. “We’re all so supportive of each other and want to see each other succeed.”

As for junior Vicki Ye, field hockey has become her sport. Similar to Buckingham, she had joined the varsity team her junior year while having been on the JV team for both freshman and sophomore year.

“My love for field hockey began with those play days in middle school where we had street hockey,” Ye said. “I really enjoyed it, so I looked further into it and I found field hockey. After signing up for a team and participating in games, I thought it was really fun.”

Ye had previous experience with field hockey from eighth grade prior to trying out for the team. However, despite this, Ye finds it just as important to put in the effort in a JV team as it is important to dedicate the time and effort for varsity.

“I push myself to do well in school, but that also extends to my time with field hockey, both JV and varsity,” Ye said. “ I feel as though being in a sport teaches me to do better, and I think that’s something that’s taught through sports in general.”

The transition between JV to varsity for Ye, however, differed from Buckingham’s current experience. When field hockey had been in season, Ye had been able to function and balance her schedule while she was in JV, but with varsity, it was proven to be much harder.

“Being on varsity had definitely been a challenge for me in terms of the workload,” Ye said. “Since I had two years of experience on JV, I already knew how to use my time by sophomore year, since I had already grown accustomed to the schedule.”

In the grand scheme of things, the transition from JV to varsity can appear daunting. At times, the intimidation of varsity can even scare a number of students to drop a sport, for fear of the commitment. However, with the right preparation provided by the experiences from JV and utmost dedication and passion for the sport, Buckingham and Ye agree that the transition from JV to varsity is an experience that they will not forget.