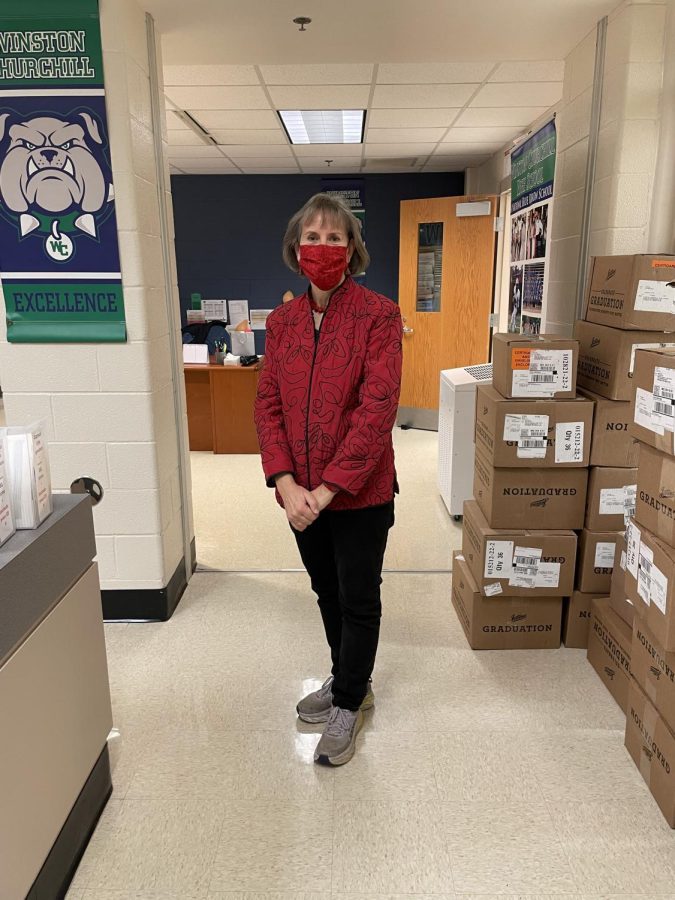 Prior to working at WCHS as an attendance secretary, Patrice Thomas worked in various other fields.

WCHS staff members. Students know them as people who work in the office, help at the bus circle, and keep students safe. Now, they spend their time supporting students and are part of teaching the future generation. However, what did they do before coming to WCHS? Did they have another career? While some WCHS staff members knew from a young age that they wanted to become teachers or work in administration, others may have traveled different paths before landing at WCHS.

Patrice Thomas and Ray Blankenship are examples of WCHS staff who had prior interesting careers. They both give so much to WCHS, yet it was not their first rodeo. What were their lives like before they came to our halls? Let’s find out.

WCHS attendance secretary Patrice Thomas has had multiple professions under her belt. From chemistry, to working with interest groups and nature reserves, all the way to WCHS, she has experienced all sorts of people, places, and lifestyles, giving her memories she will never forget.

“I morphed from science, after going to college to be a chemist, and moved into organizing and lobbying, and ended up working with senior citizens for 25 years at various places. For example, at AARP, I organized seniors to work on issues and would assemble events for them,” Thomas said.

AARP, otherwise known as the American Association of Retired Persons, is a US-based interest group that lobbies on issues related to senior citizens as well as people over the age of fifty.

“I worked with state legislatures, lobbying on issues including but not limited to healthcare, senior rights, breast cancer awareness, and basically any type of issue that affects seniors. I also managed volunteers who were working on those issues in their own communities and in their own states,” Thomas said.

After working for AARP for multiple years, Thomas decided that she wanted to venture back into the field of science to work for nature centers around the state of Maryland. She did this for a few years, teaching children about snakes and enriching their scientific and environmental education. However, cutbacks at the nature centers led to another career change. Instead of slowing down, Thomas decided that she was not done meeting new people and having new experiences.

“My children had been through WCHS. A neighbor of mine knew I was looking for a job and that there was an opening at WCHS. I applied, and now here I am,” Thomas said.

Once she started working at WCHS, Thomas thrived. She enjoys meeting parents, staff members and students every day.

“I enjoy speaking with people, and the most enjoyable parts of my days are meeting strangers. I believe that when you have people skills, you can transform your passions into many different fields of work, no matter where you started,” Thomas said.

With all of Thomas’s jobs and life experiences, she has been able to discover what she loves most about all of them. The people who come say “hi” to her, seeing new faces and meeting new coworkers are a few of Thomas’s favorite things about starting a new job.

“With the increase in technology, people are mostly interacting with their smartphones, computers, etc. However, there is nothing like looking into someone’s eyes and seeing them smile or react, whether positive or negative,” Thomas said.

Beloved security guard Ray Blankenship, or Mr. B, has not always been keeping students safe in the school environment. Before being a friendly face and security guard at WCHS, he worked in sports journalism as a radio host.

“I used to work in radio for the Washington Football Team. For about nine or 10 years, I did commercials and produced a show with Brian Mitchell and John Thompson,” Blankenship said.

Some may ask, how did Blankenship get into this career? Well, as famous Georgetown University’s basketball coach John Thompson once said, “It’s not about what you know. It’s not about who you know. It’s about who knows you,” a philosophy that perfectly describes how Blankenship’s career path came to be. It started with him working in a restaurant, and ended with him becoming a fully paid radio host.

“One night when I was serving this guy that I had listened to on the radio station, I told him that I recognized his voice and we ended up sitting down and talking. I ended up emailing him at the end of the night and said, ‘Listen, this is my passion. I love this. What would be my next step?’ We emailed back and forth for about a month and then he told me to come apply for an internship. I became an intern for six months and then, a month after my internship, they offered me a part-time position, which ended up becoming full-time,” Blankenship said.

Working in sports journalism as a radio host was an experience that Blankenship wouldn’t change for the world. However, sometimes things in life happen and it makes sense for one’s lifestyle to change careers.

“I listened to myself. I knew I needed something different and so I started looking at various different fields,” Blankenship said. “When I found this job, I thought it aligned well with my values and my desire to make a positive impact with people. Then, I applied. And the rest is history!”

As an adult or as a high school student, when applying for job positions or when crossing paths with people generally, Blankenship believes it is important to leave others with a positive experience after meeting you. You never know who that person could be and the impact they could have on your future.

“It is important to be nice to everyone and have positive interactions with people. Always help each other out, you never know what the future could hold,” Blankenship said.