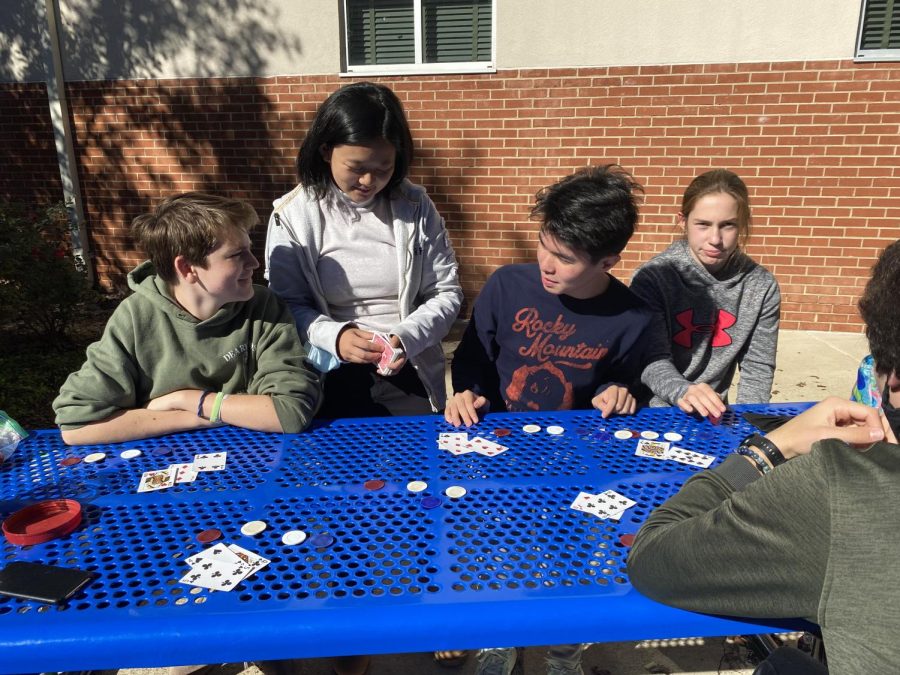 Sophomore Zoey Tahardi (standing in the blue jacket) deals the cards out for blackjack at lunch on Oct. 28. She plays blackjack with her group of friends near-daily at lunch, often in the courtyard next to the math department.

In the courtyard at the end of the math hallway, one might not mistake the blackjack game for the kind found in a high-end Las Vegas casino. There was no felt-covered table, no endless supply of food or drinks (the empty sandwich bags, containers and lunch trays were not going to be refilled) or even casino-like-vibes.

But the competitive environment, emphasized by the smiles and shouts of winning and groans from the losers, was the same. No one calls WCHS “Vegas East,” but for sophomores Zoey Tahardi, Ben Zifcak and the handful of others who spend their lunch playing no-wager blackjack, they might be calling Sin City “WCHS West.”

Once the bell rings to dismiss students from fourth period, the group heads out to the courtyard facing the math department to play their daily games. On days when the weather is not pleasant, like breezy Oct. 26, they sit inside.

With this being their first “normal” year of high school, since last year was mostly-virtual, the group had to adjust to WCHS’ lunch schedule. In middle school, lunches were half-an-hour and more restrictive than the 55-minute, open campus lunches WCHS has. One day, Tahardi brought in a deck of cards to fill the time one day and it lit a spark.

“Blackjack was the one [game] we could all agree on. It was really fun, so [Zoey] brought in chips after that and it kind of took off from there,” Zifcak said.

They do not bet actual money on the games, instead using Tahardi’s red, white and blue chips more like points that expire at the sound of the bell. The points can be used to get prizes, like the cookies or brownies that Tahardi brings in when she deals. She says they usually share with each other, but once the dealer distributes the cards, all bets are off.

The members of the game have been friends since middle school, with some going all the way back to elementary school. Their relationship is strong, emphasized by the quick jokes and gentle nudging about an old hand, which lead to laughter and smiles. It becomes apparent after watching them play for a few minutes, that they value each other’s company over winning.

“It’s just a fun thing to do with my friends during lunch,” sophomore Isaac Lui said. “It’s pretty fun and we all have a good time.”

While he reports his worst day as the time he went 147 points into debt, Lui is a big fan of the daily resetting of points and cancellation of debt and seems to be happy with the hand he was dealt. Being around with his friends makes up for any amount of loss, something Zifcak noticed too.

“Usually when you play, you play for personal gain,” Zifcak said. “Since we’re playing with a couple of people, we play that the person with the most at the end wins whatever prize we have, like candy or some treat.”