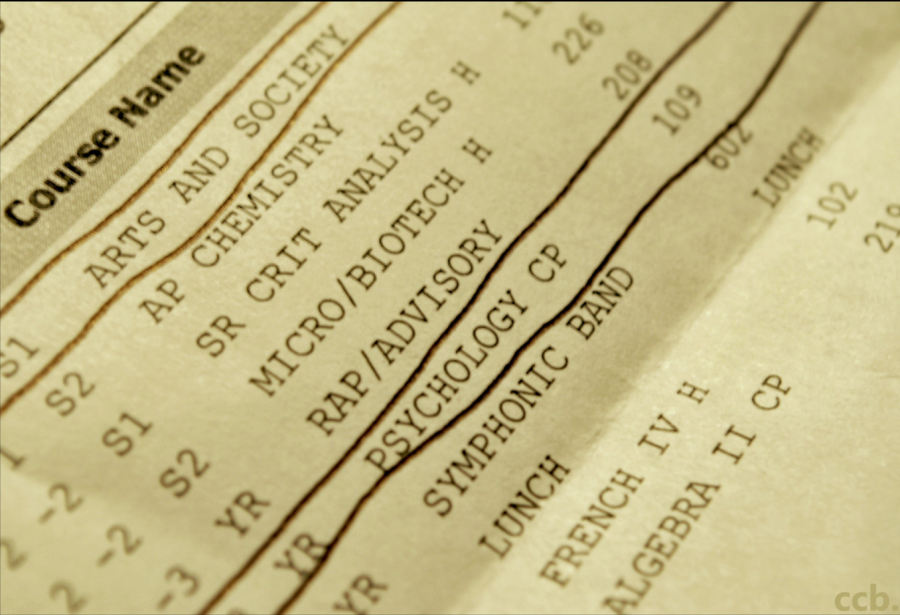 Switching teachers for the second semester was much easier with in person school as students received schedules like the one shown at the beginning of the year. In virtual learning, students had to search for new classes on Canvas and make sure they could find all of their new Zoom links.

As the first semester comes to a close, students and teachers alike are facing another challenge. One that has not been an issue since September and one that many members of the school community hoped would not become an issue again.

After the school board voted in favor of students having new schedules for the second semester, administration jumped into action, creating new schedules for a hopefully easy transition for students. Despite this, much anxiety still surrounds new schedules as students worry that they will have to start from scratch to build relationships that do not come easy in a virtual setting.

“I think I would have preferred to keep my first semester teachers because especially now during online school, it’s difficult to form relationships with your teachers and get to know one another to the point where you feel comfortable in their classes,” junior Connor Chang said.

This need for relationship building has been recognized by MCPS, with teachers and administration pleading for students to turn on their cameras. For many students, this took time, and it was only recently that students became comfortable enough in their classes to take this important step.

“It has been harder to make connections with my teachers so you have to go the extra mile to get to know them and for them to get to know you,” junior Kelsey Kwan said. “Besides from participating in class and having your camera on, going into their office hours would help since you can talk to each other one on one. I got to know my history teacher by staying after class with my friends and chatting with him.”

It has definitely been a challenge to get to know  teachers and students this year and it can be disheartening to see that most students will have to start over for the second semester. This is the catalyst for much of the anxiety surrounding these new schedules; students will once again feel uncomfortable and will have to warm up to even showing their faces in their new class.

“I’m worried about being in new classes with new teachers since I would have to form new relationships with them which was already quite difficult in the first semester,” Chang said.

It is easier for some to build these relationships than it is for others. Depending on students’ situations at home and their personality, building  relationships in general can be a struggle and the virtual aspect does not help.

“I personally have tried harder than usual to better my relationships with the students and teachers I met this year,” Chang said. “I think it’s even more important to form these relationships in a virtual setting since we need to depend on one another now more than we did when we were in person.”

Despite the challenges, switching teachers for the second semester does have its benefits. Chang expresses his cautious optimism about meeting new people and getting to know new teachers.

“I’m most excited about meeting new teachers and forming new relationships,” Chang said. “However, I’m nervous about the differences in styles of teaching that different teachers have which may affect me more due to online learning.”

Virtual learning may have its issues, but as we are already halfway through the year, students have also begun to worry about Maryland Governor Larry Hogan’s call for a return to in-person school. As hard as it is to form relationships virtually, adjusting to an entirely new way of learning in person, not to mention navigating the health concerns is yet another challenge that students hope they will not have to face.

“Personally, I’m not a big fan of online school but as we’re already approaching the second semester, I would prefer we stay online for the remainder of the school year,” Chang said. “I think transitioning from online school to in-person would be too big of a change in the middle of the year.”

Thinking back to the change in class schedules for the second semester, this is also a big adjustment to be experiencing halfway through the year. Kwan reflects on her disappointment and how she wishes she had more time to get to know her teachers and classmates.

“I would have preferred to keep my semester one teachers and schedule I’m already used to,” Kwan said. “Online school makes it much harder to connect with my teachers so I’m disappointed that I have different teachers next semester. I would’ve rather kept the same schedule and teachers so I can get to know everyone better rather than start fresh.”

As difficult as it is to start over, new classes give students a second chance at a first impression. Students who never turned their cameras on will have a chance to do so and with Zoom allowing for larger class sizes, students will get to meet more people.

“I’m excited to have classes with different friends and get to know my new teachers,” Kwan said. “I don’t know some of my new teachers so I’m looking forward to seeing what they’re like.”