From the FYP to your home, TikTok showcases trending items for users to purchase 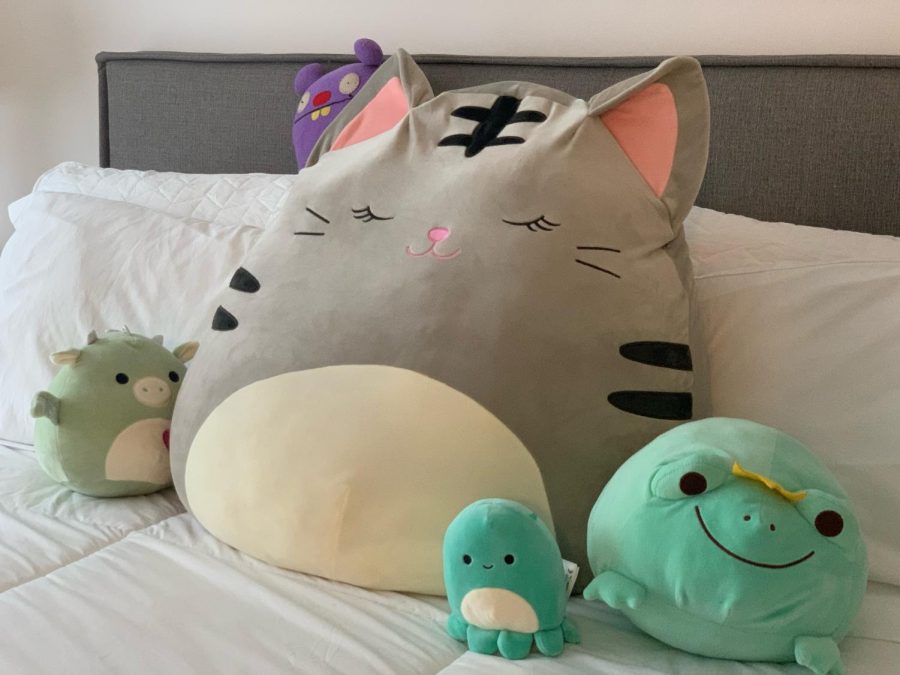 Padilla keeps all of her Squishmallows organized on her bed, with the large cat in the middle. Padilla loves to sleep on the cat, using it as an extra pillow to make her bed even more comfortable.

From VSCO girls to Squishmallows, TikTok finds trends in just about everything. New makeup looks and crazy dances are common and easy for users to partake in. However, with over one billion users, if TikTok users see something they like, that trend will be everywhere and in-demand items will be sold out fast.

One of the most recent items that blew up on TikTok was the OFFLINE Real Me High Waisted Crossover Legging from Aerie. TikTokker Hannah Schlenker posted a casual dance video while wearing a lilac pair of these leggings and the video amassed over 800-thousand likes and 7.5 million views. Comments flew in, talking about how perfect the leggings were with viewers saying “just bought some thanks girly” and “GOING TO GET THOSE LEGGINGS BRB.”

Within the same day of the viral TikTok, Aerie sold out of the leggings and users were begging Aerie to sponsor Schlenker in the comments. A couple of weeks later, she posted again in various Aerie outfits, and fans learned that she had gotten a brand deal from simply doing a dance in a pair of leggings.

Another item that has blown up due to TikTok is Squishmallows. These soft, squishy toys take the form of various animals and creatures, and after trending on TikTok, it seemed everyone had to get them. Videos were posted of users going “Squishmallow hunting,” spending days driving around from various stores, trying to find the rarest and most exclusive Squishmallows that were offered. Not only did Squishmallows gain a lot of business, but stores like Five Below, Target and Walgreens gained notoriety for being the place to go when in need of Squishmallows.

“I have a giant cat Squishmallow that I love to sleep with,” senior Bella Padilla said. “It’s super comfy and soft. I also have a lot of smaller ones like a frog and an octopus, that just make my room look super cute and friendly.”

Another viral purchasing trend is buying clothes from the website Shein and doing hauls. Shein gained popularity through its cheap prices and trendy pieces. While the website is far from perfect, and changes could be made to help the Shein workforce, the site is still popular for those who cannot afford more expensive items. Even though there is no specific item that is in demand off the site, TikTok users discovered all of the cute clothes that Shein has to offer. Users would show off big boxes filled to the brim with clothes and amass thousands of likes and comments for simply showing off what they got.

Most recently, TikTok users have been obsessed with Minecraft toys that come in a box, and you have to dig through a small cube with Minecraft-themed tools to get an animal toy out of the middle. Along with that, users have been purchasing MiniBrands, a small ball that breaks open into five different pieces, each revealing a small version of a common item, like an ice cream container or shampoo bottle.

Overall, TikTok users will find something they like and latch onto it, causing it to sell out or show up all over the For You page until the next trend comes along and claims all the attention. TikTok has become a great vessel for promotions of different brands as billions of users will quickly buy something they like if they see it on their feed.

“I have seen so much on TikTok that I wanted to get,” Padilla said. “I have to take a step back and think about whether or not I would actually use the stuff I want to buy, because a lot of it is really cool but not really a necessity when it comes down to it.”