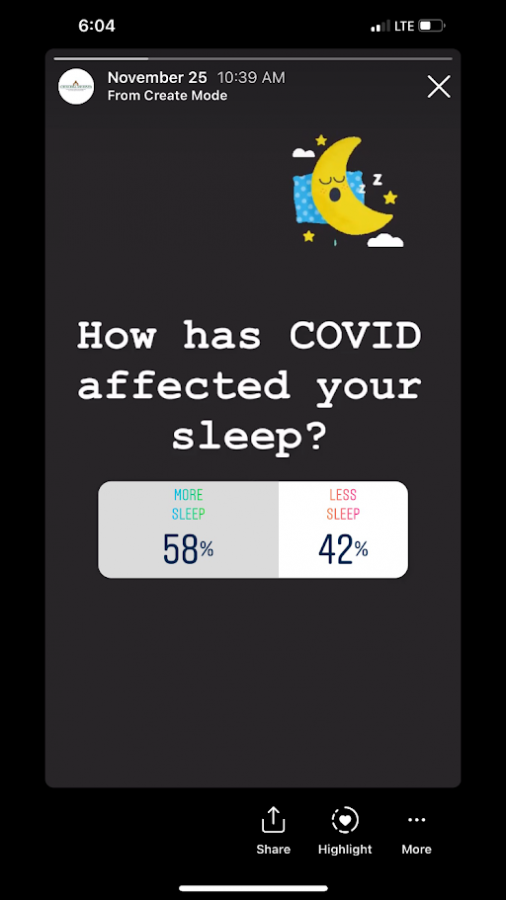 The results of The Churchill Observer's Instagram poll on how COVID-19 has affected students' sleep. A majority (58 percent) say they have gotten more sleep.

In a year of loss, from businesses to people and in-person education, sleep can be added to the list. Data shows sleeping habits are changing since COVID-19, impacted nearly every facet of daily life. The added stress and the virus itself, are keeping people up, while those experiencing more sleep are dealing with less stress and more time in the mornings.

Express Scripts, a pharmacy benefits manager, reported an increase of sleep disorder prescriptions by nearly 15 percent in February and March. A Swiss study taken in March and April found that participants gained 15 minutes of sleep a night. WCHS students are experiencing both.

“I have been sleeping later and getting up later as well,” junior Aryaan Duggal said. “I’m sleeping till at least 8:30 and I got to bed at like 1-2 a.m. My sleep length increased as well.”

That is something that Sam Krakower has noticed, too.

“I’ve been going to sleep later and waking up later,” Krakower said. “By being able to sleep longer I’ve been more attentive and relaxed.”

Junior Mariam Coulibaly is on the other end of the spectrum. She goes to sleep and wakes up later on days when school does not occur, but when there is virtual school she is seeing her sleep slashed by a few hours.

“Since the beginning of COVID, I’ve been sleeping much later and waking up later, but I’ve still been able to get around seven to nine hours of sleep,” Coulibaly said. “However with COVID and school, I only get five to six hours because I’ve been forced to wake up earlier than usual, and I haven’t been able to adjust my body to sleep earlier.”

Her new sleep schedule has caused her to feel groggy, limiting her ability to focus in class. With school entirely online, students are staring at screens for at least four hours a day, which is bad for their sleeping habits because of the blue light.

“My new sleep schedule has left me much more groggier and unable to focus, especially on a computer screen for hours at a time,” Coulibaly said. “Because of my lack of sleep and time spent staring at a screen, I’ve been getting headaches more frequently, thus making it harder to focus on my school work and completing it in a timely manner…creating a cycle where I cannot focus nor have the opportunity to get quality sleep.”

Since school begins at 9 a.m. now, more than an hour earlier than in-person school which began at 7:45 a.m., students have been staying up later than usual. Students that choose to stay up have found different activities to pass the time, including using their phones, watching shows or movies and reading.

A majority of WCHS students said they got more sleep during virtual learning, according to a poll done by the Churchill Observer. The poll showed that 58 percent of students have gotten more sleep now then they did before school moved online; 42 percent got less.

Once school returns to in-person learning, students will have to get used to waking up before 7:45 a.m. to be in their seats for the start of first period.

“Sleep is very important, but I have been valuing it less recently since I’ve been able to get more of it,” Krakower said. “If I gradually transition into it, I’ll be fine. If I had a hard switch to waking up earlier and going to sleep earlier I wouldn’t do so well.”

“I believe sleep is important in order to maintain a healthy lifestyle and efficiently work on your goals,” Coulibaly said. “This is why I’ve been trying to prioritize sleeping as much as I can, but the more time spent sleeping is less time I have to work on school and my extracurricular activities, so it has been difficult to find a balance the two, plus finding to for myself and my family and friends.”