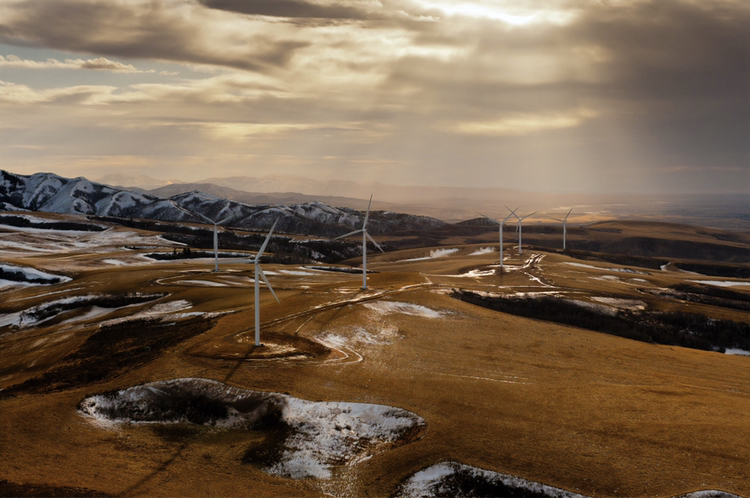 Wind farms like the one pictured are part of the future of clean energy. Soon, large corporations across the globe will use these to power stores, cell towers, and even homes.

In an effort to slow climate change and lower carbon footprint, many big corporations from all industries such as Apple, Starbucks and Disney have created environmental initiatives. These initiatives range from changing the material of products to running solely on renewable energy, and they are all part of many corporation’s goals of reaching a net positive environmental impact.

Disney has been one of the leading companies in terms of having environmentally friendly policies and they have been relying on clean energy and have virtually zero waste. As a result of this, many Disney employees like Angie Renner believe that conserving the environment is one of Disney’s oldest and strongest principles.

“Environmental stewardship and conservation were engrained in The Walt Disney Company from the beginning,” Renner said, in an interview with Forbes writer Jake Hiller.

Another reason for these changes besides caring for the climate, is that the next generation of consumers, who have grown up in a new era of environmental awareness, are more likely to purchase goods from environmentally friendly companies.

“I would be more inclined to purchase goods from environmentally friendly companies because I support all efforts to combat climate change,” senior Luke Calhoun said.

Additionally, these changes have the potential to be instrumental in reducing the damage done to our planet by large corporations. According to an article published by Fortune on Jan. 21, 2020, if Starbucks achieves their goal of cutting carbon emissions in half by 2030, that is 8 million less metric tons per year of gas entering our atmosphere.

“Companies should lower their carbon footprint by investing in renewable manufacturing and using other forms of energy like solar or wind,” sophomore Alec Lehtman said. “Additionally, shipping causes a lot of carbon emission so it’s important to not import products from overseas.”

By ushering in these new initiatives, large corporations set precedents for how other companies and world governments should handle the reduction of carbon emissions and waste buildup.

As humans enter an age where being environmentally friendly is more crucial than ever, more and more companies are beginning to follow these precedents. Now, other large corporations such as IKEA, Honda and Salesforce have followed suit and introduced new environmental policies and initiatives.

“Other major companies should follow the example of Starbucks and switch to recyclable materials & clean energy,” sophomore Lily Kreindler said. “This will lower the amount of trash that ends up in landfills and lower their carbon footprint.”

According to an Jan. 28, 2020 article published by Blue & Green Tomorrow, Starbucks made the commitment to convert 10,000 of their locations to run on renewable energy, and to increase the reusability of their cups. Although the changes are starting now, the company goal is to have these changes done by 2025.

Another company who is making large strides in their environmental policies is Apple, who has started to switch from power stores and data centers to wind and solar energy. According to a June 12, 2019 article by Business Insider, Apple has also recycled almost 40,000 metric tons of waste each year since 2017. To put that weight in comparison, it would be like recycling about 1.5 Statue of Liberties each year.

“Businesses have a profound opportunity to help build a more sustainable future, one born of our common concern for the planet we share,” said Tim Cook, Apple’s CEO, at the unveiling of his company’s carbon neutrality plan in July.

If large corporations continue to follow their new obligation to care for the climate, then a cleaner and healthier planet without the sacrifice of our global economy is a realistic possibility for our future society.