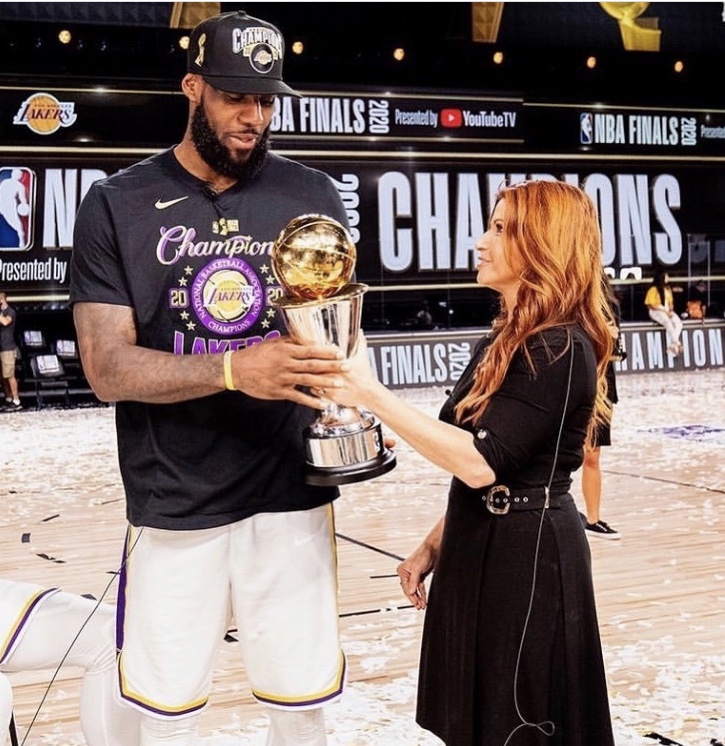 Los Angeles Lakers NBA finals MVP Lebron James stands next to reporter Rachel Nichols as the two hold his newly won NBA Finals Larry O’Brien Trophy. Nichols was the main sideline reporter covering the game in which Lebron won his fourth ever championship, and has built a strong relationship with players like Lebron over her many years reporting on the league.

As millions watched Lebron’s post-game interview after capturing his fourth NBA Championship, fans were also looking at a WCHS graduate. Interviewing one of the sports world’s most dominating figures was one of sports journalisms’s dominating figures as well: Rachel Nichols. Nichols worked as one of ESPN’s few correspondents and sideline reporters, and the sole reporter for the finals series, inside the NBA’s COVID-19 “bubble” season. Outside of just being a key figure in the “bubble”, or a WCHS alum, Nichols is also a renowned and respected journalist, talk show host, multi-sport sideline reporter, TV personality and much more.

“It was really cool seeing someone from WCHS court-side at the finals,” Andrew Chan, a WCHS senior and student journalist said. “She was amazing the whole NBA bubble, making sure to capture each moment and get the players’ raw reactions.”

Nichols became a notable figure in the conclusion of the NBA’s suspended 2019-2020 season, which gained national attention when it was rescheduled and moved to an isolated location in Orlando, FL. Players from 22 out of the 30 teams were invited to finish the season, isolating themselves in the effective “ bubble” which included Disneyworld resort hotels and the ESPN World of Sports campus. The season was very successful with zero coronavirus cases in the thousands of personnel over three months, and a historic Los Angeles Lakers’s championship to cap it all off.

This success was due to an extremely tight system entailing hyper-regular testing, strict quarantines and rules, and limited access for all teams, league, resort and even media personnel. Initially, the NBA only let 15 journalists in across all networks. This meant ESPN, even as the major coverer of the games, would only be allowed three correspondents total. While in the Bubble, Nichols was seen nationally covering the sidelines and interviews. In an era of pandemic unrest,empty stadiums, social justice and Black Lives Matter (BLM), the chances for the players to nationally speak their minds were of exponentially increased importance.

“It’s inspiring to see her cover so much of the NBA bubble,” Jack Kustner, a WCHS senior said.  “It’s something that so many people tuned into view and talked about. To know that she was a big part in the broadcasting is really cool.”

Through this national attention many in the WCHS community, including student-journalists, were reminded of Nichols notable place within this community. As a 1991 graduate of WCHS, Nichols participated in journalism at WCHS just as many current students do in publications like The Observer or yearbook. She went on to graduate from Northwestern’s Medill School of Journalism and entered the world of sports journalism, soon finding herself returning to the DMV to cover the Capitals for the Washington Post from 1996 to 2004.

In 2004, Nichols joined ESPN, one of the largest sports networks in the world, where she would work until 2013 and establish herself as a national presence within sports journalism. She became a regular on notable programs like SportsCenter, NFL Sunday and Monday Night Countdown, ESPN’s NBA coverage and the award winning investigative journalism show E:60, on which she was an original correspondent.

“It’s really exciting to know that someone as respected as Rachel Nichols went to our school. It’s even cooler that she wrote for the Observer,” Chan said. “We have some notable alumni, but she is definitely one of the most famous.”

Nichols proved herself outside of purely sports coverage when she joined CNN in 2013 to host her own show. At CNN, she was widely praised for calling out the NFL commissioner for mishandling player domestic abuse cases and for challenging world famous boxer, Floyd Mayweather, on his past domestic assaults.

“I’m always able to trust what she has to say about whatever she’s broadcasting,” Kustner said. “I associate hard work with Rachel Nichols. To be that successful in that competitive of an industry is truly breathtaking.”

Presently, Nichols is back at ESPN as one of the network’s most active personalities. Since rejoining ESPN in 2016, she has hosted her own NBA talk show The Jump, which breaks down NBA developments and features many celebrity and hall-of-fame guest panelists.  She has also often anchored for ESPN’s NBA primetime and finals coverage, appeared on various other talk shows and done sideline reporting as she did in the bubble.

“I think she has been so successful because of her professionalism and her knowledge of the industry. She is extremely well-spoken and confident,” Chan said. “Whenever I see her on TV, she is very professional and great with the players. She is an amazing interviewer, so I loved seeing her talk to the players after every finals game.”

For WCHS student fans of Nichols, her shows and reports are even more special. While talking to some of the most famous athletes in the world or appearing on nationally televised and viral events, WCHS fans can see a glimmer of bulldog. For all WCHS students, Nichols stands as a premier example of the levels of accomplishment, notability and success that is possible for hard working WCHS students.

“I know all ESPN analysts are super hard working, but the fact that she walked in the same hallways as I have is pretty cool,” Kustner said. “Knowing that someone that successful went to my school gives me a boost of confidence to keep working hard.”

Although, this inspiring connection is even more prominent and personal for WCHS student-journalists, many of whom already knew of and admired Nichols work, and enjoyed her shows and journalism before entering journalism themselves.

“I admire her versatility as a journalist. She does so much in terms of reporting and is always great with the players, and makes sure never to overstep or misreport something,” Chan said. “She is a role model, someone I can look up to. Her work is impressive and a blueprint that journalists should try to emulate.”

These journalists have a unique opportunity to look up to someone who used to be in their shoes, their halls and their publications. Someone who can serve as a leading example of journalistic integrity and success, and provide tangible lessons for student-journalists looking to improve their own journalism and succeed in the field. Rarely is a role model more accomplished and personally relevant than Nichols is for WCHS student journalists.

“I am proud to have her as an alumni because she is one of the best reporters of her time. It is a great look for our journalism program,” Chan said. “I hope to leave a similar legacy on the newspaper, having future students look up to my work as well.”