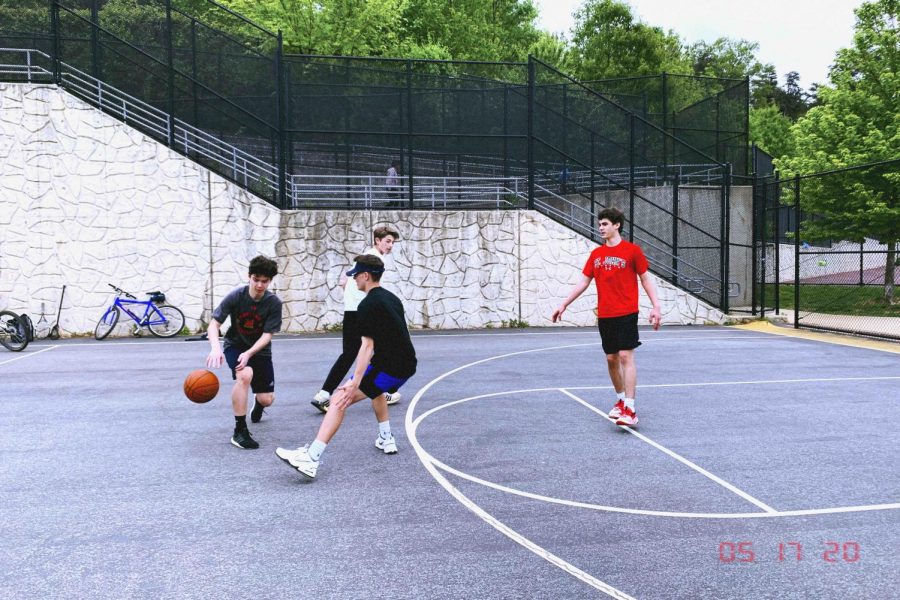 Dribbling a basketball towards a defender, Zack Mantz (left) plays basketball during his freetime at Cabin John Middle School against some of his closest friends.

From wanting to go to your favorite sports games to being optimistic about finding a store that has Lysol in stock, Covid-19 has made life significantly more challenging. There are many pressing matters in the world right now, like politics and climate change, but one thing teenagers around the country are worried about is staying connected and in contact with their friends. Students in the WCHS community have been finding ways to adapt and even explore new interests.

A lack of Hawaiian-themed football games on Friday nights or movie showings at Arclight in Montgomery Mall creates a lot of free time for WCHS students. Many students have filled this increase in spare time by finding new hobbies, such as working out and skateboarding. Going on runs in your neighborhood and learning how to ollie in your driveway are both contactless and socially distant, which makes them popular activities among teens during the pandemic.

Although there are many individual activities that can occupy free time, being alone for too long has significant consequences on the mental health of teens. Therefore, different friends groups within the WCHS community have found diverse ways to connect with each other.

“Right now what I miss the most is the football season and seeing movies with my friends at the mall. During the fall and winter time we see a movie almost every Friday together,” WCHS sophomore Zack Mantz said.

Mantz has picked up golf in his free time along with basketball and football with his peers. Mantz jokingly claims that he has made a 300% increase in the amount he plays golf monthly since April. He also hangs out with his friends, at the local community center or on the WCHS field, to play sports with one another. Basketball and football are the two most popular sports Mantz and his friends play.

“We play basketball during the weekend and even after school during the week. It brings me joy everytime I see my friends now no matter what we’re doing since I couldn’t see them for a long period of time,” Mantz said. “It’s definitely easy to take small things like seeing your friends for granted.”

“We have just as much fun with each other by playing video games as we do when we hangout in real life. We talk about everything over the microphone and I’m always laughing with them whenever we play any type of game,” Mantz said.

Sophomore Alexa Resnick has also been connecting with her friends very regularly. Her tight-knit group of friends go to each other’s houses and hang out with each other as they normally would. During her time at home, Resnick picked up painting as a hobby.

“I began painting in March right when quarantine started, but I’ve been slowing down how much I’ve been painting since school started. I’ve filled about seven canvases with art since that time though,” Resnick said.

“I’ve been working hard during quarantine and I miss competing with my teammates everyday. I’m staying optimistic and definitely think there will be a time this year when I can go to a Friday night football game and then hangout at one of my friend’s houses afterwards,” Mantz said.