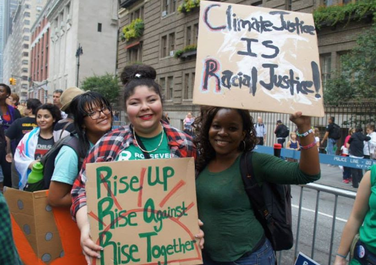 Courtesy of Students for Climate Justice

A couple climate activists of color attend and hold signs at a climate change march. One of the signs importantly states "Climate Justice IS Racial Justice!"

In a time of increased awareness in America surrounding the abhorrently unjust conditions of systemic and institutionalized racism, it is important to shine light on the many issues that disproportionately affect the African American community and are not getting the attention they deserve. This article seeks not to take attention away from one issue surrounding racism and injustice, but rather aims to raise further awareness and empower necessary justice in another area. That area is the past, current and future effects of environmental destruction and climate change on a racially unjust scale.

First, the simple fact that we are in a climate crisis must be stated. The world is nearing irreversible climate catastrophe on an existential global scale, and unless it acts boldly and quickly, it risks cataclysmic effects on the entire earth and all the species on it. Everyone should fear what is to come if humans do not act. This problem is also racially unjust, because the communities who have, are, and will bear more of the brunt of environmental issues and climate change effects to come are disproportionately the ones of color and indigenous origin.

It is also important to note the relationship between class, political representation and race, and how they interact in this issue. This pattern of racial injustice is heavily influenced by these interactions.

This is an ever complex issue, so this article will only hit upon the main principles of this problem, but please continue to educate yourself further about this topic at home and abroad.

The main principles of environmental and climate racism are that minority communities are most likely to live in areas that are compromised or abused by polluters. They are more likely to deal with health effects of environmental pollution and climate change, and their communities are more likely to be harder hit by the effects of environmental destruction and increasing effects of climate change. All of the effects of climate change from habitat destruction, to increased natural disasters, to resource scarcity, to large scale human displacement, and much more, will increase the cost of living with and adjusting to these disastrous results. The most vulnerable to these climate disasters are those in communities who presently lack the socioeconomic mobility, governmental assistance, wealth and the resources to avoid the effects. Unjustly this vulnerability falls upon the lower income and minority communities of color.

“Environmental injustice, including the proliferation of climate change, has a disproportionate impact on communities of color and low income communities in the United States and around the world,” a statement reads on the NAACP’s website for Environmental and Climate Justice.

This trend is readily confirmed by countless facts, data pieces and studies presented by scientists and social advocates. A 2013 report by the NAACP1 denotes some of the most startling of these facts, such as, that African American children are three times more likely to go to the emergency room for an asthma attack, and twice as likely to die from one. Additionally African Americans are more likely to die from lung disease, but less likely to smoke. Not to mention another fact that African Americans make up a larger amount of urban populations in terms of percentage, and that many cities will be the first affected by rising sea levels, ever increasing natural disasters, storm seasons along coasts and extreme urban heat waves.

According to NAACP, “Race is the number one indicator for the placement of toxic facilities in this country, and communities of color and low income communities are often the hardest hit by climate change.”

The existence of so called “cancer alley” stands as a sad, but prominent example of this trend. It is a strip of predominantly African American river communities in New Orleans that are so badly polluted by corporate polluter’s petrochemical, oil and other plants, that residents have unseen levels of cancer and other chronic health issues like respiratory diseases. The latest EPA estimate released in 20182 put seven of the highest ten census tracts for cancer in this region alone.

According to another 2018 EPA study2, “Locating polluting facilities in low-income neighborhoods and communities of color means that people with marginalized identities experience more asthma, a greater likelihood of heart attacks, even premature death. The disadvantages that come with those health issues… create a cycle of poverty and lack of access to opportunity that spans generations.”

Aside from pure environmental harm, global climate change already excessively harms minority communities, and this trend only looks to accelerate with the climate crisis. In the US, simple climate effects like temperature rises, weather disasters and increased urban heat are all poised to disproportionately affect the large African American essential work and urban populations.

On a broader global scale, the onset of climate catastrophe would only lead to more poverty and costliness of resources. This probable rise of the cost of living and stressing of natural resources and lands, often used most by indigenous communities, would just further exacerbate the cycle of poverty that links this problem with racial injustice in the first place. As the trend usually goes, in times of disaster, communities with lower amounts of wealth, representation and governmental assistance are the ones who are the least able to escape them.

This pattern of climate injustice plays into many larger issues of racial inequality in our nation. The racial disparities in prior health conditions and the immunocompromisation that comes with them have been one of the obvious trends emerging in why this pandemic has so disproportionately affected African-Americans health wise. African Americans are  one of the groups most disproportionately prone to have respiratory conditions or diseases, putting their demographic much further into physical risk when it comes to a disease like Covid-19.

At the end of the day, no amount white privilege or racial advantage will save anyone from the coming effects of a catastrophic climate crisis. Scientists across the world are united behind the fact that all should be aware of the situation at hand and scared. That said, there must also be recognition of what communities have been and will continue to be disportionately affected by the effects of environmental and climate destruction.

Like in many other social justice issues, racial and environmental justice intersect. The same systems of massive inequality, white privilege and dominance and uncontrolled capitalism that are active behind America’s systemic institutionalized racism, are also active behind the climate crisis. To deal with climate change all communities must be uplifted, especially the ones most affected. And beating racism means uplifting the same communities that need to be given climate justice as well. Both are not just possible, but extremely necessary. Fighting our climate crisis means fighting for racial justice. Climate justice means racial justice.

Once again, this article, and conversation, are very important as they shine light on one of the many issues that the African American, indigenous and other communities of color are unfairly and disproportionately affected by in our nation. Black lives matter and so do their communities that are being unjustly harmed by climate change. Please keep researching this issue and the many others it intersects with on your own time, and stay educated and attentive to our many pressing social justice issues surrounding race in this nation.