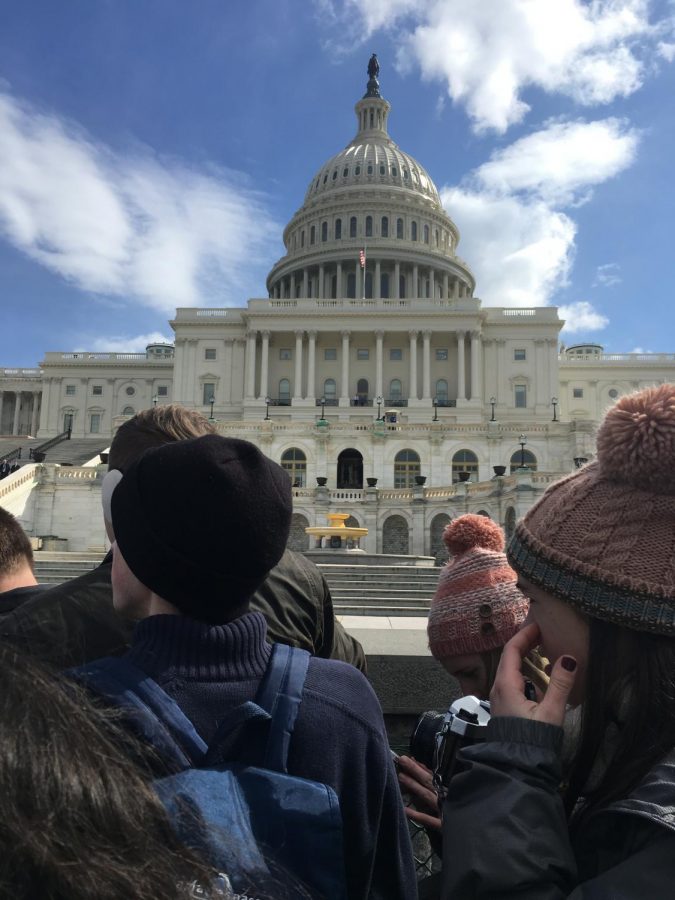 WCHS attenda march outside the DC Capitol. Protests are a common form of political participation

In today’s political climate, it is imperative that teens, the next generation of voters, get educated and involved in politics. WCHS students are doing all they can to create a better tomorrow, and this starts with knowledge on who is running their government.

With the Democratic Primary elections and debate season upon us, politics seem to be an increasing topic of conversation. Maryland primaries are on April 28th, so 17 and 18-year-old students are gearing up to vote.

“I’ve been researching the Democratic candidates and what they stand for,” senior Micaela Magud said. “Since this is the first time I’ll be able to vote, I want to make sure I’m an educated voter and I support the candidate who aligns with my priorities.”

According to the U.S. Census Bureau, voter turnout among 18 to 29-year-olds went from 20 percent in 2014 to 36 percent in 2018. The power in the coming election lies within the youth, and this power is something that students need to wield responsibly.

“I just hope that people realize how important their vote is,” Magud said. Magud tries to educate her friends so that they may make an educated decision on who they want the next leader of the country to be.

Student organizations, like the Women in Politics Club, advocate for student involvement in government, and civic engagement. Voting in the Student Member of the Board (SMOB) election also allows students to practice exercising their rights and making an informed decision based on a candidate’s policies, goals and ideas.

“Even though I’m not old enough to vote yet, I still try to stay informed and engaged in politics so that by the time I’m 18, I know enough to be able to vote for a candidate who will best represent me,” freshman Lauren Safra said.

According to MCPS, 2015-2017 SMOB, Eric Guerci, received more votes to win his election than did Democrative primary candidate of South Bend, Iowa, Mayor Pete Buttigieg, to win his mayoral position. This shows the true gravity of the state of our school system– by participating in the MCPS election, students are making a decision that is comparable to that of a state government.

Students also stay involved in politics by attending marches and rallies. This peaceful method of activism helps create change, whether that be as small as on the school level, or as large as on a national or even international level.

“I’ve attended a bunch of marches in DC, like the Women’s March, the March for Our Lives and the nationwide walkout,” Magud said. “It [attending marches] really helps me feel like I’m making an impact on our country.”

WCHS students are creating change and informing themselves in order to create a better tomorrow. The leaders of the next generation are those who educate themselves now.

“I keep myself educated in politics because I want to be informed in decisions that are made about my life,” Magud said.