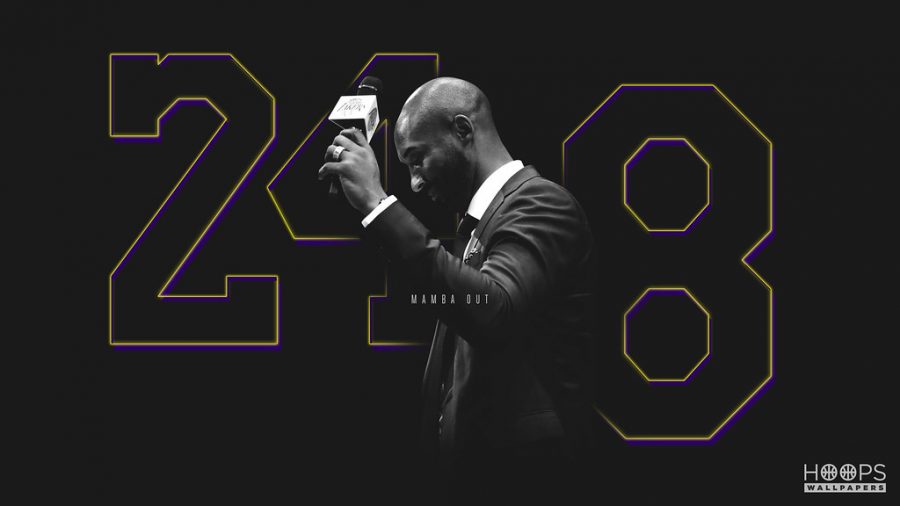 A hoops poster of the basketball star Kobe Bryant with both of his jersey numbers, eight and 24.

Feb. 24, 2020, the heart wrenching memorial service for the passing of Kobe and Gianna Bryant, was a very emotional day for all basketball fans and friends of the Bryant family. The service, held at the Staples center in Los Angeles, Calif., left the audience with heavy hearts and teary eyes.

The service started with a performance by Beyonce Knowles, singing one of Bryant’s favorite songs, “XO”. A bittersweet screening of a montage of the star in the best moments of his basketball career played shortly after. Clips of celebrations with family, friends and teammates were showcased across the jumbotron as a wave of silence settled in the audience.

The opening speech was performed by Jimmy Kimmel, a comedian and talk show host. Kimmel was in tears the entire duration of the speech.

“I’ve been trying to come up with something positive to take away from this, and there isn’t much,” Kimmel said. “ It seems to me that all we can do is be grateful for the time we had with [Kobe and Gigi] and for the time we have left with each other, and that’s all.”

Kimmel had asked the audience to greet and hug the people around them, and to be grateful for life and being here together. The audience had then powerfully chanted Kobe’s name, which showed the legacy he left behind.

Shortly after these opening remarks, Kobe’s wife and the mother of Gigi, Vannessa Bryant, was  welcomed to the stage to perform her part of the memorial, which was followed by a standing ovation.

A Deseret news article published on Feb. 28, 2020 stated that it was not even certain Vanessa Bryant would give her speech at the memorial, and that it was all dependent on her emotions and how comfortable she felt at that moment.

Bryant started off her speech in tears while mentioning her daughter’s bright smile and her sweet and caring nature. Throughout the speech many celebrities, like Jennifer Lopez and Shaquille O’Neal, were shown to be visibly emotional about the loss of such a bright young girl.

Vanessa Bryant eventually moved onto the next part of her speech about her husband and talked about the amazing bond they shared together. She mentioned how they both would go out of their way to help others and how they were naturally drawn to each other.

“God knew they couldn’t be on this earth without each other,” Bryant said. “He had to bring them home together.”

The other seven members who tragically passed away from  the crash were also mentioned and given recognition.

Important family and friends to the Bryant family, such as Diana Taurasi, Sabrina Ionescu and Coach Geno Auriemma of Connecticut, all gave speeches recognizing the impact Kobe Bryant left on women’s basketball.

Overall, the entire two hour event left the staples centers air thick with emotion. Gianna and Kobe Bryant, along with the others killed in the crash, will be dearly missed and forever looked up to  for the amazing positive print they left in the world.

“The passing of Kobe and Gigi affected everyone globally,” sophomore Elisa Zoltick said. “The churchill population including myself is so grateful for all of the kindness, love and inspiration they have brought to this world.”