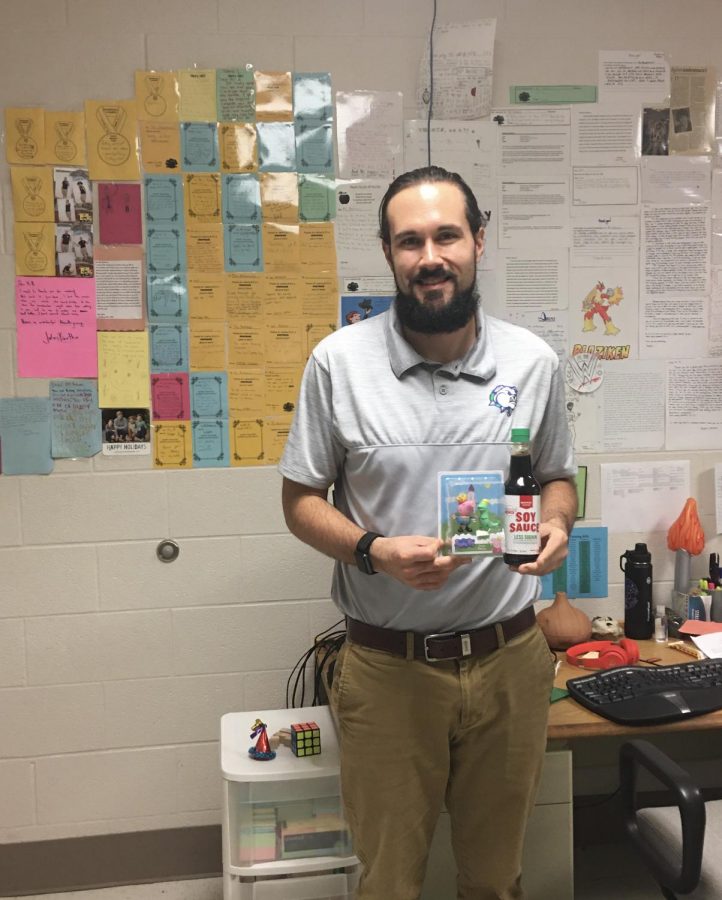 Mr. Antonucci stands in his office holding his gift of a Peppa Pig and the soysauce while he is surrounded by the written cards all over the walls.

Each year students struggle with finding the ideal gift for others. They browse the web and wander into stores at the mall in hopes of finding the perfect present whether it be for a friend or a teacher. They cannot be cliche or boring, but what about crazy?

Often times teachers receive the craziest gifts imaginable from students. Ranging from handmade artworks to beer kits. Some students show acts of appreciation for their teachers in the most ingenious and creative way possible.

“One student last year around Christmas got me a package,” entrepreneurship teacher Dylan Antonucci said “It was wrapped in tinfoil and held together with bandages, and inside was a toy figurine of Peppa Pig along with a bottle of soy sauce.”

This is Antonucci’s first year teaching at WCHS. The school he taught at before was Bethesda Chevy Chase High School. Even if it was not from a WCHS student, it just proves how students all around Montgomery County give crazy gifts.

“I don’t throw away anything a student gives me even if it has no use to me,” Antonucci said.

Even if the gift is wild, people and teachers would cherish it no matter what it is. They would always have them scattered around their rooms or in their office. It may be considered useless but it has sentimental value to it. It is the thought that counts.

“It is not about what the actual present is, but more the fact that I teach a hundred or so students,” Antonucci said.“To think that I might get 10 to 15 kids that actually want to give me something, that in itself is the meaningful part, that I have affected their lives in some way, as a thank you.”

Teachers do not receive the appreciation they deserve for their hard work but when the holidays come around, students show their love and care.

“These gifts I have received are unique such as sculptures from students that have quotes from literature we have studied in senior year written on them,” AP Lit teacher Haroot Hakopian said.

Usually students would write cards or give chocolates, but students are getting really creative in the gifts they give.

“I guess they gave it to me because in my eyes I have an unorthodox approach to teaching so I think I connect with students that also might identify themselves in that mold and they appreciate that,” Antonucci said.

All over the walls of Mr. Antonucci’s office are written cards from past students over the years.

“For Christmas, I received a beer brewing kit four years ago from a freshman that I taught,” Honors Chemistry teacher Jonathan Lee said.

This student was very excited for Lee to open it in front of her, that he tore the wrapper off and saw labels and logos for beer and beer-brewing ingredients. He had to immediately sneak it under his desk.

“Aside from the fact that it was a risky gift to open at school, it was a pretty cool gift,” Lee said.

It was a strange gift to give a teacher, but it was unique. No one would have thought to give anything related to beer to a teacher.

“I used it a couple of times and then eventually gave it to a friend who likes the brewing hobby a lot more than I do,” Lee said.

It was a thoughtful gift but it just was not to his taste. So even if it’s weird, someone else might have a use of it.

“The student probably thought that a teacher’s job is stressful enough to warrant such a gift and hobby,” Lee said.

Then again, teachers go through anxiety, having to grade papers and getting ready for the next day’s lectures. Getting gifts once in awhile would boost their self esteem and remind them again of why they liked teaching in the first place.

“I’ve given someone a sausage and pineapple before as part of a white elephant gift exchange party,” Lee said.

It could also be the other way around, when teachers give the wildest gifts. All in all, a gift is a gift. No matter how insane or normal.

“Words means the most than any material possession that I can be given,” Antonucci said.