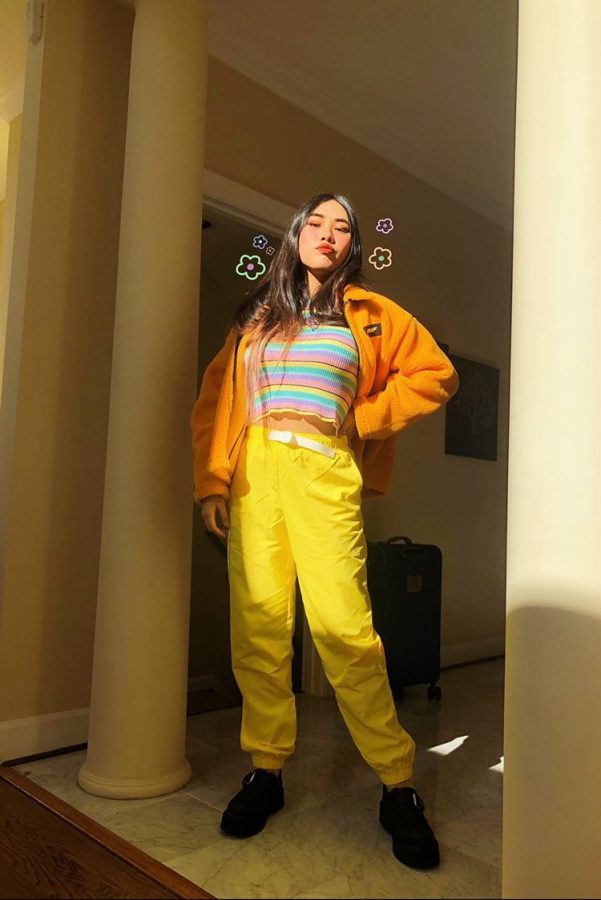 By Ohio Meshanko and Victoria Park

One of the most important aspects of teen lives is the clothing they wear. Brand names, color, price, design, celebrity endorsements and many other factors all influence the clothes they buy. Fashion-forward teens follow the changing trends of every season and also change the way they shop to develop their own personal style. With increasingly improving technology, finding and buying clothes that fit their taste is more convenient than ever before.

Female teenagers tend to be more focus on details like dress codes, occasion and the brand’s impact when buying clothes. More research and time is also spent on purchases as they finalize what they want.

“When I buy new clothes, I think about what I could wear with it. If I buy a new pair of pants, I make sure I have a top to go with it,” senior Shelby Hutton said. “Price is important because you can find cute pieces that aren’t super expensive, and it’s better to get more items for the same price as a few items. I try to get lots of staple pieces, as in basic pieces that I can wear with lots of different outfits, such as plain T-shirts.”

Online stores also make it easier for consumers to see available colors, sizes, prices and fits on models. There is also usually more inventory available since orders are shipped from larger supplies rather than an in-store stock.

“I usually shop online, but for formal or special occasions I shop in person,” senior Angela Ren said. “Online clothing stores are often more organized than the physical stores, sometimes I go to a physical store first and make the purchase online later.”

Fashion icons such as singers or designers also have a heavy influence on teen styles. There has been an increase of Instagram influencers, online platforms to share outfits on and a larger cultural interest in the clothes that celebrities wear.

“Ayla Tesler-Mabe is my fashion inspiration. She’s this incredible guitarist, and she wears lots of funky patterns,” senior Shelby Hutton said. “She wears a lot of 70’s-80’s vibes and I really like that and try to emulate it.”

Thrifting and styles from the ‘60s-’80s returning have also started many of the trends today, such as bell sleeves from the ‘70s and mini skirts from the ‘60s. This come back can be attributed to pop culture such as tv shows like Mad Men or Stranger Things.

The male teenage demographic generally makes less of a hobby out of shopping’ they generally care less about the specifics of what they’re wearing. Senior Pedro Mendonca’s wardrobe consists mostly of branded items from college visits and school programs, as well as pop-culture referencing shirts he has ordered online.

“I generally try to keep things simple and cheap,” Mendonca said. “If it fits me and isn’t weird-looking, it’s perfectly fine.”

Shopping for specific shirts takes place online, but the bulk of his generic shirts were bought at stores like Target for a low price.

Some brands, such as Supreme, are popular among young men, but the popularity isn’t near that experienced by female-oriented brands. The ‘hypebeast’ subculture, known for showing off expensive urban wear, is a holdout of traditional shopping with physical stores receiving lots of traffic. Still, online shopping is huge for many of these brands too.

Dressing up for formal events is no exception to this rule. Junior Garret Birnbaum recalled that while his sister spent extensive amounts of time shopping for a homecoming dress, he chose the first suit that fit him.

“I don’t need to look flashy, as long as I’m presentable,” Birnbaum said.

One item of clothing serves as the major exception to this trend- shoes. Brands like Nike and Reebok are consistently popular in the male demographic, with the highest-end shoes selling for hundreds or even thousands of dollars. Brand deals with the NBA have also helped sales, with players like LeBron James getting his own very special (and very pricy) Nike shoe.

“I feel like my shoes are more important than other pieces of clothing,” Mendonca said. “I’m not going to spend a million dollars on a pair, but I’ll spend more than I will on clothes for a quality pair with a nice design.”

While in-store shopping has declined more for women than for men, the trend can be applied to both. The rise of online shopping is evident, and brands that have adapted with online marketplaces have prospered, while those who haven’t, have begun to wither.

As teenagers are becoming more conscious of the environment and the world around them, the stores and clothes they invest in hold more meaning. Recently, the long-time popular retail store Forever 21 announced that they would be declaring bankruptcy because of their fast fashion practices that have proved to be unsustainable for the sweatshop workers behind them, as well as the consumers who are growing tired of cheap, fragile material. Teenagers have shown less and less interest in supporting companies like this in an effort to waste less and combat cruel worker treatment.

Another growing movement of ethics in fashion is the use of leather and fur in clothes. These materials are often farmed on a mass scale which has often been linked to animal cruelty and mistreatment. Larger brands and retailers such as Macy’s have pledged to become fur-free within the next few years. Political push for a fur ban is also evident in the country’s first state to ban fur: California.

“I try to avoid things like real leather or real fur since fakes are cheaper and don’t support animal cruelty,” Hutton said. “I also do a lot of thrift shopping because it’s fun, you can find really unique pieces, it’s cheaper, and good for the environment because it’s getting as much use out of an item as possible and not creating unnecessary waste.”

The fashion world is constantly evolving. With online shopping moving to the forefront of the industry and an increasingly globally conscious customer base, retailers need to adapt to stay afloat.