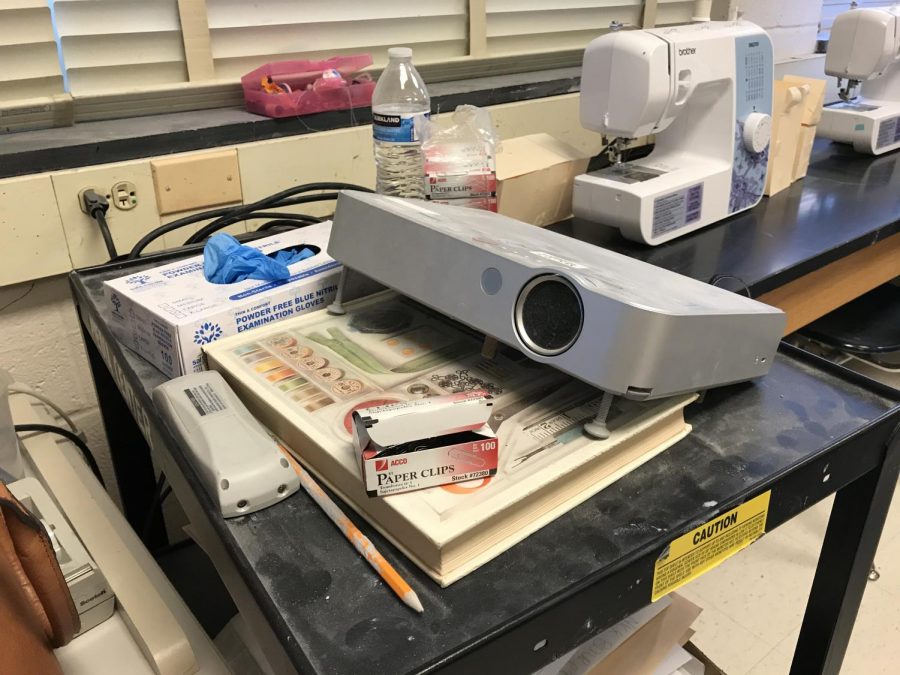 Projectors that were used many years ago serve no purpose in this day and age as all they do is sit and collect dust.

In recent years, many MCPS classrooms have been completely overhauled to accommodate a modern learning and teaching experience. The widespread adoption of Promethean boards and chromebooks, specifically, have allowed for lessons to be planned and organized faster and  cleaner than with markers or chalk. Students also gain more real-world preparation, since typing is far more common than hand-writing in today’s workplace.

However,  some classrooms, for unknown reasons, have been left entirely without these crucial upgrades. The teachers who use these rooms are stuck using methods that others do not, potentially impacting both teachers’ and students’ performance.

Room 274, a ceramics classroom at WCHS, does not  even have a whiteboard. The setup looks like it came out of a classroom from 15 years ago, with a dusty chalkboard being the only writable surface in the room. This room has no Promethean board, either, but only a small overhead projector shoved into the corner. Ceramics and Fashion Design teacher Tiffany Carmi, who uses this room on a daily basis, jokes that the setup came from the 19th Century.

“I had to paint colored squares on the walls to act as a stand-in for a bulletin board,” Carmi said. “There’s never any chalk for the board, either, so I usually don’t get to write much.”

The lack of modern teaching equipment does not only make life harder for the teacher, but also the students.

“I can’t ever see anything on the projector,” senior Isaiah Zack said. “The image it makes is really small, and there isn’t even a roll-down surface for it to project on to.”

The room is already quite dusty because of its use as a ceramics classroom, so the added chalk dust in the air doesn’t help much for students with allergies or sensitive noses.

The room itself is also deteriorating. One look at the various sinks around the walls reveals that the particle wood used for the countertops is beginning to disintegrate, resulting in peeling and structural weakening.

“I don’t think these countertops were designed for long term use in an art room,” Carmi said.

Though room 274 and the other neighboring art rooms are the best examples of what seems like structural neglect, they are not the only ones. Several science rooms, such as room 145, do not have white boards and still rely on chalk, though the inclusion of a Promethean board in this room compensates somewhat. It is still unclear why school administration has yet to upgrade these rooms to more modern standards.

“I’ve asked for a Promethean board so many times, and I always get turned down,” Carmi said. “I hope that this year things may end up differently.”