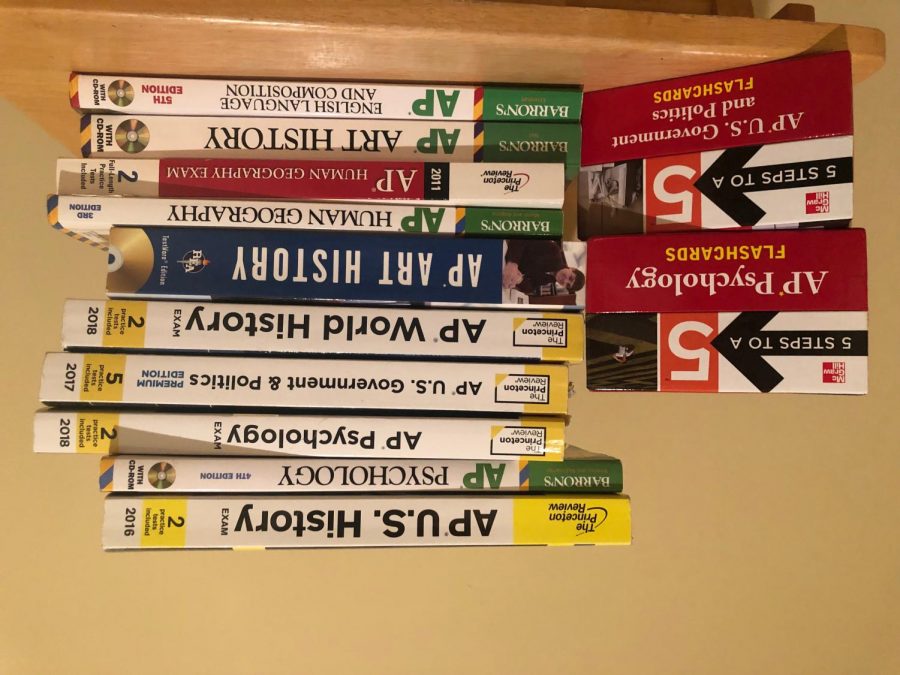 With AP exams coming up, students tend to stock up on review materials. AP classes provide students the opportunity to get college credits, but are often stressful and extremely challenging.

April: ‘tis the season to begin preparing for AP exams both in and out of the classroom.
But, while many WCHS students participate in Advanced Placement (AP) courses throughout the school year, not all of them follow through with taking the corresponding exams. There are many reasons students decide whether to take AP classes and the exams, most prominently that several colleges give credit to students who receive certain exam scores.

“I have taken 13 AP classes, including the five that I am currently enrolled in,” senior Matthew Menkart said. “I take APs not only to challenge myself but to expand upon my knowledge so that when I enter college I will already have been exposed to the content.”

Students will opt to take the AP version of a course rather than the honors or regular level if they feel it is a topic they are most interested in or a subject they will excel in. However, sometimes the exam, which is an entire year’s work of content crammed into a single two-hour test, may not be so appealing to students who do not care as much about fulfilling the credit.

“I didn’t want to take the classes at an honors level because I wanted the rigor of a college class; but I took it solely for the experience and understanding,” senior Gena John said.

John has completed eight AP classes but is only going to have taken five of the corresponding exams. Menkart will have taken all of the exams for the 13 total AP classes he will have completed before the end of high school.

According to a WCHS fact sheet (which can be found on the WCHS website), 78 percent of WCHS graduates score a three or higher on AP tests.

As stated, many colleges will give students course credit for exams they earn a certain score on. Depending on the subject, this minimum passing score often falls between a three or a four. For example, AP Psychology is a popular subject for WCHS students to take because it possesses one of the higher passing rates at WCHS and is known as a widely accepted credit among American universities.

“I plan on taking all of the exams because I believe that since I have taken the class, I should try my best to earn a high enough score, so I do not need to take the class again in college,” Menkart said.

It is not always easy to pass every exam, however. Some classes, such as AP Physics 1, have low passing rates at WCHS.

This class is one of the ones senior John and senior Maya Tondravi do not plan on taking the exam for. This demonstrates that the college credit is not always the most important aspect when deciding whether or not to take an AP class.

“Over the past four years, I’ve taken 10 APs that I chose mostly based on interest but partially based on what colleges were looking for,” Tondravi said. “Up until this year, I took all of my exams, but this year I’m only choosing to only take two out of my five exams as those were the tests I feel most prepared for.”

Some students may not feel it is worth paying $98 to take a test they do not feel they can pass.

Regardless of the exam score, some colleges recommend students enroll in certain classes of certain subjects depending on the school’s “core” curriculum as well as the individual student’s career and academic interests. “Core” refers to the general areas of mathematics, language arts, social studies and the sciences, and may be classes colleges expect a student to enroll in for all four years of high school.

In terms of future goals, to put it in simpler terms, if a student aspires to become a doctor and study pre-med at college, they may be expected to take chemistry, biology and other science courses during high school to gain exposure and demonstrate their interest.

“Most of the AP classes and exams I have taken were either because I was interested in the class or I believed it would fulfill either high school or college credits,” Snow said.

At the end of the day, the expansion of knowledge is most important when choosing classes. However, in a competitive academic atmosphere like that of WCHS, one can get lost beneath the pressure to perform and earn as much college credit as they can.

“I decided to take AP courses that I knew I would have to eventually take in college based off of my major,” John said. “I wanted to get a baseline understanding of the subjects so I wouldn’t be completely lost, and so it would allow me more time to experience everything college has to offer.”