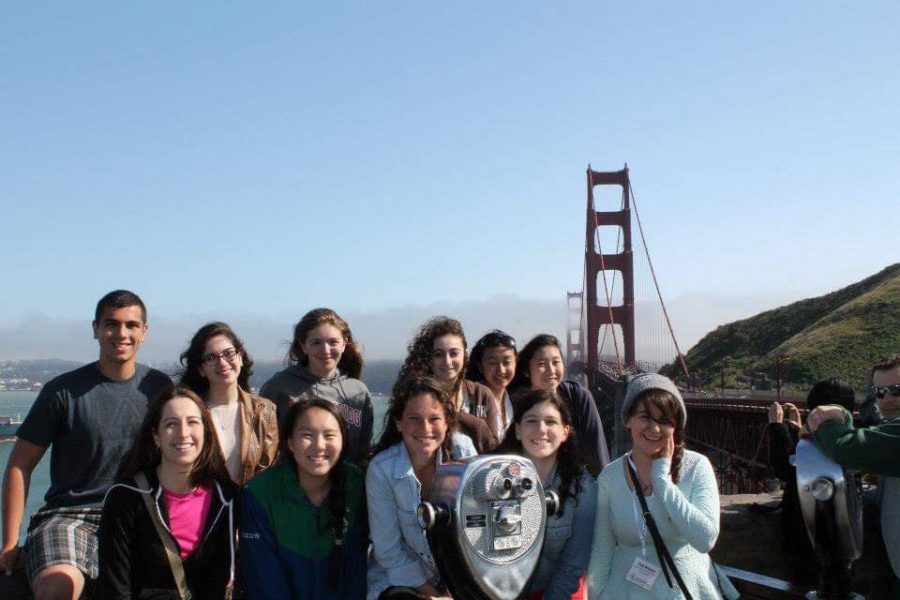 When Jamie Lescht was on the Observer, their journalism class took a trip to learn more in San Francisco.

By Emma Chen and Vicky Gunawan

As we transition editors for the Observer, it is time to recognize crucial contributions to our paper, and honor the amazing writers and editors that came before us and have shaped the paper into what it is today.

One of these editors is Larry Tanenbaum. A former writer for the Observer in 1968 and 1969, Tanenbaum was an assistant sports editor who covered varsity sports, mainly focusing on baseball, basketball and football. Tanenbaum also had his own op-ed sports column in the paper called “The Bulldog House.”

“Writing for the Observer helped me develop my writing skills, a skill that I believe is essential to success in nearly every profession,” Tanenbaum said. “A well written memo or email can make an immediate favorable impression and go a long way toward how the reader perceives your current and future role in the organization.”

Tanenbaum is now an attorney at the firm Tobin, O’ Connor and Ewing. He also served as the Chief of Litigation for the DC Housing Authority for 40 years.

“At the time I worked for the Observer, I definitely thought the experience would be helpful because at that time I wanted to be a journalist,” Tanenbaum said. “Although I went into law, the experience was still very valuable because being able to write well is critical to being a successful lawyer.”

Another one of these editors is Jamie Lescht. Lescht was on the Observer from 2010 to 2014 and contributed as a public relations manager, the arts section editor and the online editor-in-chief.

“Writing for the Observer impacted my life because it’s my fondest memory from high school,” Lescht said. “When I look back on Churchill, what really sticks out to me are the hours I spent in ‘the J’ pitching, writing, and working for the paper.”

Lescht is now a publicity assistant with the publishing company Penguin Random House. Although she didn’t have a future career in mind throughout high school, being a member of the Observer taught her important communication skills that she still uses to this day.

“As a student journalist, you’re constantly tasked with interviewing people you’ve never met before and steering the conversation,” Lescht said. “These are invaluable skills that will follow you no matter your career. Being on the Observer taught me how to do research, ask important questions, and communicate well all of which I use consistently in my job.”

Ending on a high note, former advertising manager, opinions section editor and editor-in-chief Fiona Asbury was on the Observer from 2012 to 2016. Asbury is currently a student at Yale University and is studying Mandarin on a fellowship in Taiwan. She is also an Air Force ROTC cadet at Yale University.
“Being a part of the Observer was instrumental in shaping my high school experience–it dictated how I spent many of my lunches, how I arranged my schedule, who I had the opportunity to interact with, etc., and these are all factors which have led me to where I am today,” Asbury said. “I think one of my favorite parts of being a student reporter was getting to have conversations with staff and students with whom I might not have interacted otherwise.”

While Asbury is not currently interested in pursuing a career in Journalism, her time on the Observer has provided her with skills that she will utilize throughout her entire life.

“My writing greatly improved during my time on the Observer, and I became much more curious and observant of those around me,” Asbury said. “In my various positions on the Observer, I gained valuable leadership experience, learning to be an effective leader amongst peers–a skill that I often have to apply as an ROTC cadet in college. All in all, I don’t think that I would be the person I am today, or be traveling down the path I am right now were it not for my time on the Observer.”

Every year, the Observer emerges with a new family of talented, imaginative and diligent writers. Many of these writers continue to stay in touch through social media and even visiting old members of the paper.

“I’m still friendly with a handful of people from the Observer,” Lescht said. “It’s really funny to see where we all ended up because each of us is doing a different type of work in the media sector. For me, I’m working on the book publishing side, but one of my friends from the Observer is a political writer and the other is an aspiring film producer.”