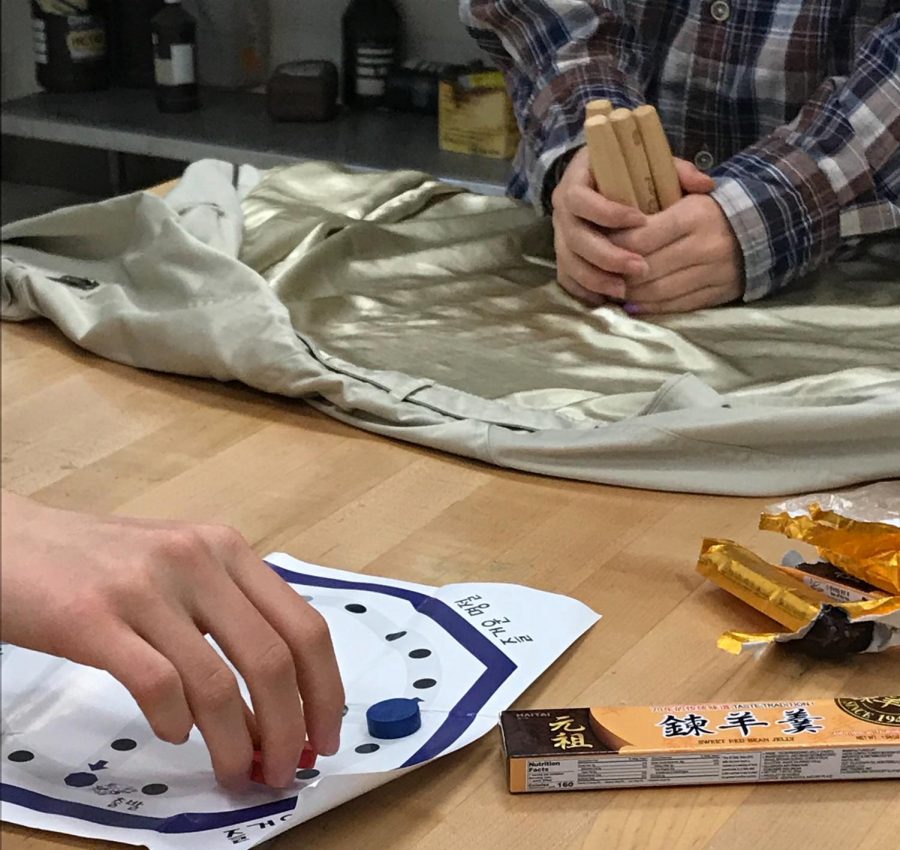 Yutnori is a Korean game where you hold 4 sticks and throw them, moving a piece on the “map”, depending on how your sticks land.

What do crackling fireworks, bubbly champagne (or apple cider for the kids), a kiss at midnight, 2019 LED glasses, and 4 wooden sticks have in common? Most Americans recognize New Year’s as a time to make resolutions and watch the ball drop, but other cultures welcome the year in much different ways.

According to the Census Bureau of America, a new immigrant moves to the United States every 33 seconds. The U.S. is known as one of the most diverse countries in the world, and is often referred to as a melting pot. With its variety of cultures comes many unique ways to celebrate the holidays.

“Koreans play a game called yutnori where you basically throw four wooden sticks and move a piece on a map based on how the sticks land,” said Korean-American junior Irene Kim. “Each throw combination represents a different animal and you move it accordingly.”

Yutnori dates back as far as 57 BCE and was traditionally played among farmers. Nowadays, it is played with two teams and whoever moves the most amount of pieces wins.

“We also go to the houses of elders and say ‘Sehebok manhi baduhseyo’ which means to have a healthy and lucky new year,” said Kim. “We bow to them and get money.

These kinds of traditions are common for many Chinese-American immigrants as well. According to Pew Research Center, there are around 4,948,00 Chinese-Americans which makes up the majority of Asian Americans.

“[We] prepare food and the rest of us would help out with preparations and sometimes we might decorate the house with themes of red, gold or put up a few symbols of prosperity and good luck, said Chinese-American junior Maggie Zheng. “We also get red envelopes called ‘hongbao’.”

Although cocktail parties with champagne flutes as you munch on hors d’oeuvres is common for most Americans, larger family gatherings and home cooked meals are tradition for Zheng and Kim.

However, Americans whose grandparents or parents immigrated here often have difficulty maintaining such traditions due to distance or lack of access to some necessary materials.

“Just living farther away from relatives and not having access to some food that would be common in Korea makes it harder [to carry out traditions],” said Kim. “I don’t visit as many relatives since they live in Korea or farther in the US.”

Better national relationships and better technology to transport goods means that this issue is becoming less apparent. The Office of the United States Trade Representative indicates there has been an increase in imports in recent years from China (115.6 billion) and Korea (42.3 billion), making it easier as time goes on to replicate traditions that originated from one’s homeland.

“I like celebrating these holidays because I can learn more about being Korean and feel more connected with my family,” Kim says.