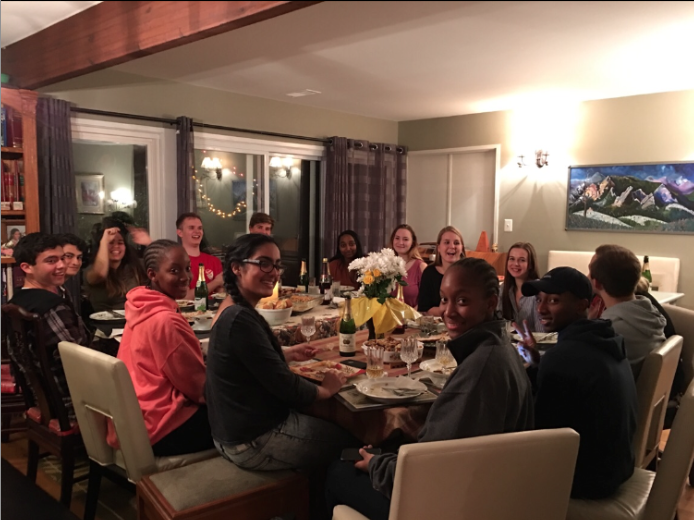 Exchange students and their hosts enjoy a 'family' dinner together.

The CHS exchange program with Denmark sought to forge bonds between American and Danish students, and to create a better understanding of cultural differences.

“I wanted to host students because I thought it would be a cool opportunity to meet people from another country and of another culture,” said junior Emily Stein, who hosted two students. “I was just excited to meet them and see what they were like, but I was nervous for the same reasons.”

CHS students who hosted the exchange students took initiative over the weekend to show them all that Maryland has to offer.

Juniors Bryn and Maya Arnold hosted two students and among their weekend itinerary was a trip to the Silver Diner and, more interestingly, to Costco.

According to Maya Arnold, Costco was the highlight of the students’ trip because of how “big” everything was to them.

Arnold ended her time with the Danish students with a trip to Shadowland for some laser tagging.

Some CHS students looked to alternate cities to provide the Danish with the ultimate American experience.

Stein took them to New York City for a day trip. They shopped, ate and toured SoHo.

“I brought them to New York because I love it there,” Stein said. “I think it’s a great part of America and since they have never been to America, I thought they had ought to see New York.”

Others, like junior Bridgette Warner, came up with creative ways to exemplify the true American experience. She created a mock Thanksgiving meal and invited CHS hosts and their exchange students to come.

Although there are some distinct differences between America and Denmark, the exchange students and their hosts found that Danish teenagers aren’t so different from their American counterpart.

“I was surprised at how funny they were and how similar they were to us,” Stein said.

A big cultural difference that CHS students found is that public school students in Denmark get paid to go to school.

According to 18-year-old Rasmus Rask, one of the Danish students, this is because the government wants students to be focused on their studies instead of work.

Rask found that he was pleasantly surprised by the “politeness and hospitality” of Americans.

Although the Danish students stayed at the houses of the CHS host families from Oct. 7 to the morning of Oct. 12, their last three days will consist of staying in a D.C. hotel and touring with the class they came here with.

Their schedule includes an official tour of Georgetown University, a football game at the university, an evening walk on the monuments, and a river rafting trip.

Juniors Suuba and Sadia Demby, who hosted two Danish students, are planning to go on the Denmark trip that is tentatively planned for the Spring.

“We got the incredible opportunity to show the Danish students America,” said junior Suuba Demby, who, along with her twin sister, hosted two students. “It’s an opportunity that won’t get often, so it’s cool that we were the ones who got to show them.”